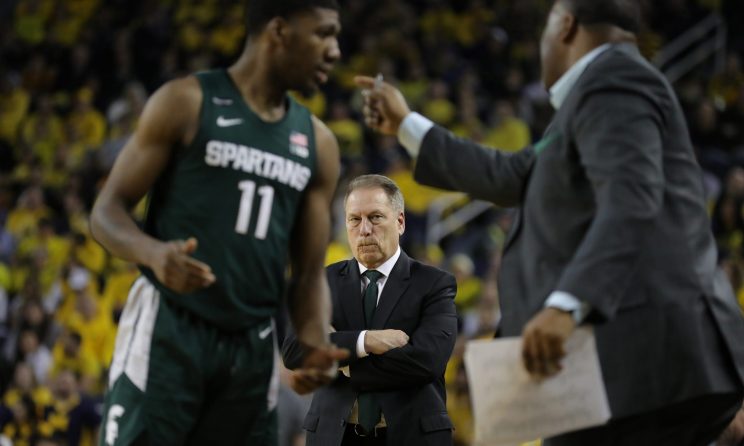 In his predictably homespun way, Tom Izzo apologized for “taking up some of your day.”

That is how Michigan State basketball’s Hall of Fame coach began a video call with reporters late Monday afternoon, hours after learning he tested positive for COVID-19.

Izzo, 65, does not know how or where he contracted the novel coronavirus. He said he tested negative Saturday and Sunday, then tested positive Monday morning after the daily antigen test required by the Big Ten. A PCR swab test later confirmed the presumptive positive. He will undergo a 10-day isolation period, and he can return at the earliest Nov. 17, according to Big Ten guidelines. His symptoms began Saturday, per the athletic department release.

Michigan State coach Tom Izzo looks on during action against Michigan, Saturday, Feb. 8, 2020 at the Crisler Center in Ann Arbor.

Hoarse as he always this time of year — but with a slight cough — Izzo said no one else in the basketball program or his family have tested positive for COVID-19. His son, Steven, is a sophomore walk-on. The Spartans began daily antigen testing Oct. 26.

“I’ve been beating my brains out to figure out where and how. I think I’ve been as diligent as anybody, which just … tells you more how serious maybe the virus is,” Izzo said from his home office. “I know for a fact that I wasn’t at any big parties, didn’t visit any frat houses or sororities. I’ve been just kind of sitting in my own house and going to work. …

“No matter what you do, it’s a little bit like Russian Roulette, you just never know. You do the best you can do, and I feel like I have. And so I don’t have any regrets.”

Izzo has been one of the state’s most vocal proponents for wearing a mask, helping Gov. Gretchen Whitmer and the state spread the precautionary message since April. He said he has followed state and federal guidelines and advice from the Centers for Disease Control since the pandemic began.

“I’ve been an advocate of wearing our masks and practicing social distancing. I’m still an advocate of that,” Izzo said. “I don’t think that deters me in any way, shape or form, I think we’ve got to understand that it is serious and it’s invisible. …

“We’ve tried our best to do what we’re supposed to do. And yet, we still got to live. So I would say stay with the protocol.”

“It’s been very difficult for DJ (Stephens), because every day when we’re talking about it with our players and everything, DJ is sitting there,” Izzo said. “I can’t even imagine how hard it’s been on him. … We’ve done a great job of every time we come together as a team, we mask up. Everybody wears a mask. We have a meeting, we mask up. We’ve tried to follow everything.

“Right now, no players, no family have tested positive. Hopefully that’ll remain that way and I’ll be the only weak link in this group.”

The college basketball regular season, which was supposed to begin Tuesday with MSU vs. Duke at the Champions Classic in Chicago, now is scheduled to start Nov. 25. That game with the Blue Devils remains in limbo, though a report last week said it is being planned for Dec. 1 at Cameron Indoor Stadium.

Izzo said he will likely ride his Peloton bike and continue to watch film while in isolation as his East Lansing home. He planned to have a video call with the players Monday night after his assistants met with the team. He may try to watch practice and workouts remotely as well, having already picked football coach Mel Tucker’s brain about how he was able to begin installing offense and defenses over the spring while separated from his players.

“Hell, they probably won’t want me to come back.”

“Maybe we can talk about what we’re going to do against each other,” Izzo said, “because we got a lot of time. He’s sitting there, I’m sitting here.”