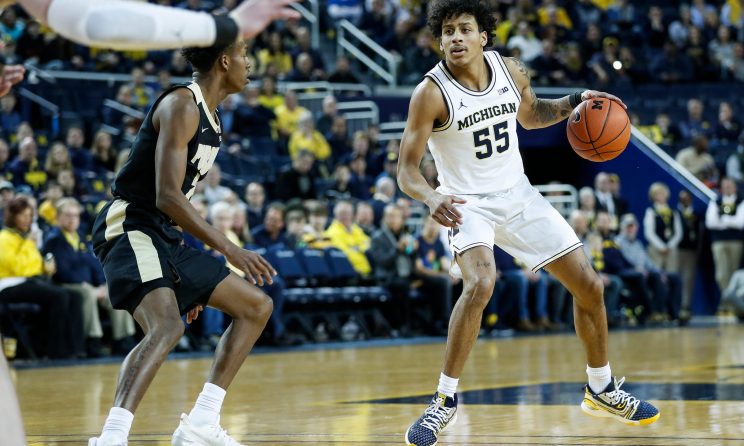 “Whatever gets me on the court,” Brooks recalled answering.

Then, Brooks was coming off a quiet sophomore season in which he averaged just 2.5 points in less than 13 minutes per game. Howard opted to start Brooks alongside senior lead guard Zavier Simpson last season.

Brooks flourished in that role. He emerged as one of the Wolverines’ most reliable catch-and-shoot threats and established himself as one of the Big Ten’s premier perimeter defenders. He posted 13 double-figure scoring performances and eclipsed the 20-point mark five times, including a season-best 25 points against Iowa in January. His team-high 52 3-pointers paced a Michigan offense that relied heavily on outside shooting.

“I think (Smith) complements me really well because we both can play on the ball and both can play off the ball,” Brooks said during a Zoom call with reporters Tuesday. “His ability to shoot and his shooting numbers throughout practice have been pretty impressive.”

Like Simpson, Smith spent a lot of time with the ball in his hands at Columbia. He’s used to the offense flowing through him, but the increase in competition level may require a transition period. Brooks, too, must make adjustments after logging nearly all of his minutes off the ball last season.

Now almost two weeks into official practices, Howard has shuffled around the scrimmage lineups in order to give Brooks and Smith a chance to get reps at both positions. For Brooks, that means reacclimating to the lead guard role after spending his first two seasons as a backup point guard.

“I’m hoping to improve on ball-screen decision-making,” Brooks said. “That’s something that I’ve made a conscious effort to watch film and get better on that end, just seeing the right pass, so trying to take things off film and seeing where I can improve on, who I’m missing and just trying to see the floor a little better.”

At one point last year, teammate Isaiah Livers described Brooks as a “silent assassin.” He was known for leading by example, but now that he’s transitioning back to point guard, Brooks has challenged himself to change that.

“I think I’ve made a jump in that area, just speaking up,” Brooks said. “Not necessarily the same way that (Simpson) did but teaching points, trying to get involved on that end … Try to teach (other players) through it and everybody has their different leading styles but sometimes they do need to change their different rules, so I think that’s the area I can make the largest impact.”

Without Simpson, leadership has become a collective effort. The door is open for for returning seniors like Brooks, Livers and Austin Davis to fill the void.

For now, that leadership is delegated.

“The coaches lead the larger points but the players lead in their own little pods, so Isaiah has the wings and when he sees something, he speaks up on that,” Brooks said. “… Every position has those two or three leaders that bring up points in the individual breakouts. Coach Howard always preaches that it’s your team, you have a voice in it, too, so I’ve seen a lot more guys speak up in practice, so that’s been something that’s been really good.”

Welcome to the Detroit Free Press 2020 Voter Guide. The Free Press asked candidates in most of the contested races in Macomb, Oakland and Wayne Counties questions about a host of issues. Enter your address to see what the candidates on your ballot had to say, from U.S. Senate to your local school board. You will only see an accurate ballot if you enter your full address. Your information will not be shared with anyone.