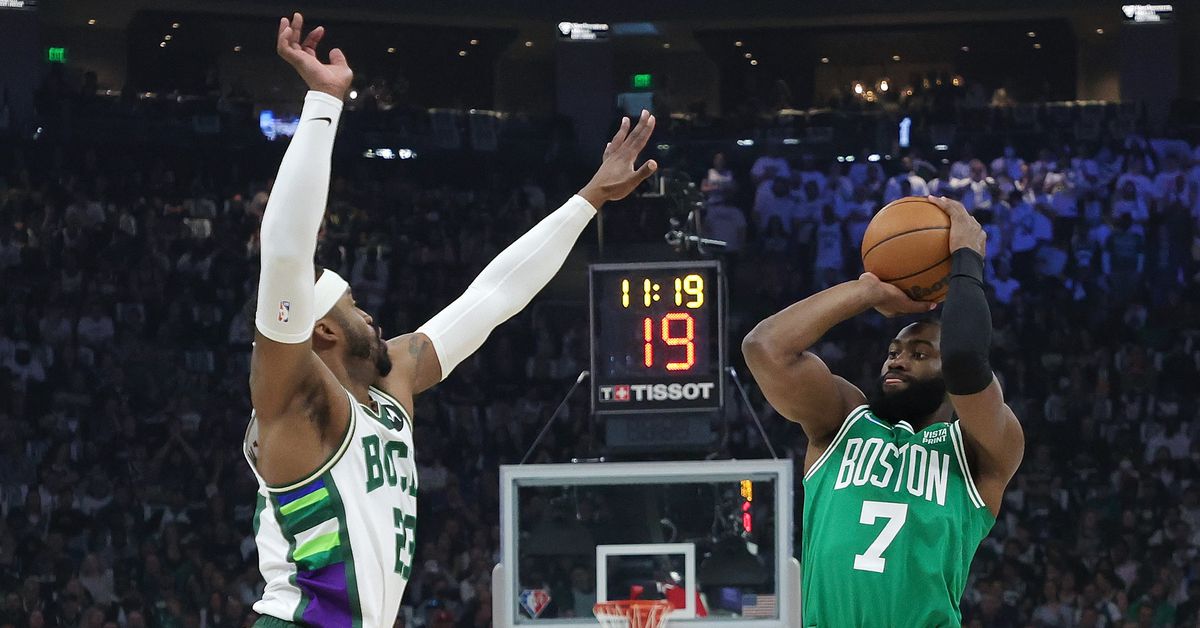 The Boston Celtics and Milwaukee Bucks allegedly played a basketball game on Saturday afternoon, but you’d be forgiven if you mistook it for American football instead. Game 3 of the Eastern Conference Semifinals was one of the most physical basketball games of the entire NBA season, a miserably ugly slugfest featuring no shortage of bricked shots and hard contact.

Ultimately, that’s an environment that favored the Bucks, who thrive on physicality and transition scoring. Though the Celtics mounted a furious comeback in the fourth quarter, a potential game-tying tip-in from Al Horford came just after the buzzer sounded, and the Celtics lost their first road game of the series.

Jaylen Brown recorded his second consecutive excellent performance, pacing the Celtics with 27 points and lifting the offense as Jayson Tatum struggled with a 4-of-19 shooting afternoon. Horford tacked on yet another postseason turn-back-the-clock performance, recording 22 points, 16 rebounds and 5 assists while providing his customarily stellar defense in the paint. But the Celtics couldn’t overcome a gigantic performance from Giannis Antetokounmpo — 42 points, 12 rebounds and 8 assists, and they now trail in the series, two games to one.

The Boston offense resembled its Game 1 self in the early going this afternoon, kicking off the game shooting an anemic 33% from the field in the opening quarter. Things weren’t much better on Milwaukee’s end, as the Bucks posted a 36% mark of their own. That is to say — this was an ugly game from the jump. Neither team found anything resembling rhythm, and there was seemingly a lid on both baskets, as good looks just didn’t go down. It felt as though the Celtics were being solidly outplayed, but they entered the second quarter trailing by just three points, 22-19.

The ice began to thaw as play resume, at least a bit. Horford kicked off second quarter scoring with his second three-pointer of the game (the only Celtic to connect on any to that point), and the Celtics drew even with the Bucks on the scoreboard, juggling the lead within one possession for much of the quarter.

Midway through the quarter, Tatum had a brief injury scare, appearing to hurt his left wrist after a questionable hard foul from Antetokounmpo at the rim (upheld as a common foul on review), but remaining in the game and converted the and-one free throw. Such physicality was the theme of the afternoon, with players hitting the floor on seemingly every possession while the officials largely swallowed their whistles. Combined with the continued offensive struggles of both teams, it was one of the most unpleasant halves of basketball of the year, and the teams finally, mercifully hit the halftime break with the Celtics leading by four, 50-46.

The second half commenced with much the same tenor as the first. The Bucks took the driver’s seat with a 12-4 run in the opening minutes, and the two teams continued to impose themselves physically on both ends of the court. Early in the quarter, Antetokounmpo knocked Robert Williams to the floor with an elbow to the chin on a drive, which was ruled a common foul that Udoka declined to challenge. A few possessions later, Antetokounmpo got tied up with Grant Williams after a play, but after a brief potential altercation, the fallout was merely a common foul on Williams.

Midway through the quarter, Robert Williams took an elbow to the face from Milwaukee’s Bobby Portis while battling for a rebound. Williams went to the floor while the Bucks ran in transition, and immediately signaled for the Celtics’ training staff. He departed the game after the play, but thankfully returned to the Boston bench a few minutes later and was labeled as available to return.

In terms of actual basketball, the third quarter belonged entirely to Milwaukee. Their physicality completely threw the Celtics off-balance — particularly Tatum, who shot a truly putrid 3-of-17 from the field through three quarters. The Bucks outscored the Celtics 32-17 in the quarter, and the teams headed to the final frame with the Celtics trailing 80-67.

As the fourth quarter kicked off, it was Boston’s turn. The Celtics finally found some uninterrupted success, led by heady play from Brown, and began to cut the Bucks’ lead down to size. Brown connected on a quick left-handed layup to push the Celtics’ run to 12-4, and suddenly, the Celtics found themselves back within five, prompting a Mike Budenholzer timeout with 7:30 remaining in regulation.

The Celtics inched ever closer as play resumed. In the next few possessions, Grant Williams pulled off an incredible block against Antetokounmpo at the rim, and Brown completed an and-one layup (drawing Antetokounmpo’s fourth foul) to get the Celtics within four. Shortly thereafter, Grant Williams picked up his fifth foul after being called for a charge against Milwaukee’s Pat Connaughton, which was upheld after a Udoka challenge.

The teams went basket-for-basket for the next few possessions as the clock ticked under five minutes remaining. The Celtics trimmed the lead down to just two points after a Horford hook shot, and then turned the Bucks over on the ensuing possession and drew a foul in transition to send Marcus Smart to the free throw line. He split the free throws, and the Celtics trailed by a single point with just under four minutes to play.

As the clock ticked under two minutes, the Celtics came all the way back. Excellent defense from Horford forced an Antetokounmpo miss at the rim, and Brown drew a foul on the other end to connect on a pair of free throws and put the Celtics ahead 100-99. The defense continued to shine from there, smothering Antetokounmpo again on the ensuing possession to force a shot clock violation. The Celtics grabbed an offensive rebound on their next possession, but couldn’t come away with points, and Budenholzer called a timeout with 50 seconds remining in the game.

The comeback wasn’t meant to be, however. Coming out of the timeout, Antetokounmpo connected on a layup to put the Bucks back ahead, and then blocked a jumper from Brown on the other end of the floor. Jrue Holiday hit a midrange jumper on the ensuing possession, and suddenly the Celtics were staring down a three-point deficit with 11 seconds to play, 103-100. Smart attempted to draw a foul on a three-point jumper, but it was ruled a rip-through foul, awarding two free throws instead of three. He missed the second attempt on purpose, and Horford appeared to tip in the game-tying layup, but the attempt was after the buzzer and the game was over.

Next up, we won’t have to wait quite so long for the series to continue. The Celtics will take the court this Monday for Game 4 in Milwaukee at 7:30 PM EST on TNT.