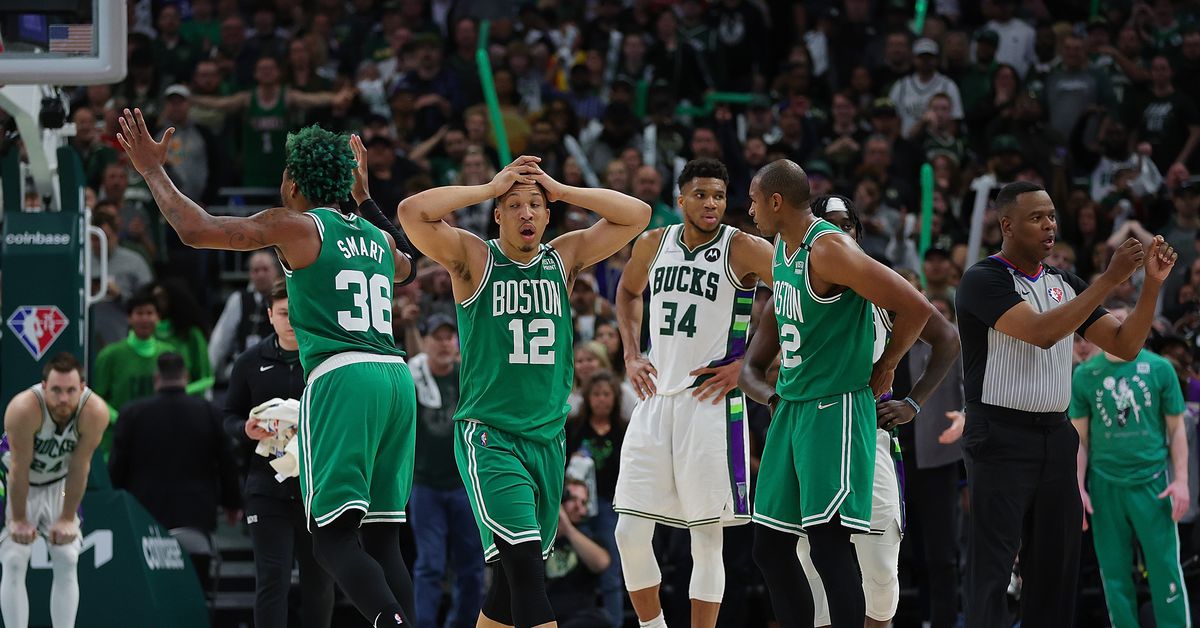 The NBA released the last two-minute report for the Boston Celtics’ Game 3 loss to the Milwaukee Bucks. It lists five incorrect calls in the last two minutes of the game.

First, the league determined that this should have been a foul on Giannis Antetokounmpo. At the end of the clip, after Antetokounmpo’s layup attempt, he grabbed Al Horford’s arm, preventing him from running up the court.

This play ended in two free throws for Jaylen Brown, so it didn’t hurt the Celtics too much. However, the league still ruled it as an incorrect non-call.

This play was also ruled as an incorrect non-call. The league stated that Brown made contact with Antetokounmpo as he was shooting and before the shot clock expired.

Instead of a shooting foul, this possession ended in a Bucks shot clock violation, handing over possession to the Celtics.

This may be the most important missed call of the game, as the league ruled that Holiday should have been called for a five-second violation on this inbound play.

The Bucks would score a go-ahead bucket on the ensuing possession thanks to an Antetokounmpo layup. However, according to the league, Boston should have been awarded possession after Holiday failed to inbound the ball in time.

On this play, the league ruled that Horford should have been called for a defensive three seconds violation, as he was stood in the paint without actively guarding an opponent.

In turn, the Bucks would have been awarded a technical free throw. Instead, play carried on without any penalty.

The following is one of the plays that many have been up in arms about. And as many predicted, the league did say it was an incorrect non-call. However, they ruled that a foul should have been called on Tatum for pulling Holiday down, causing him to lose his dribble.

This was the explanation given in the L2M: “as Tatum (BOS) is falling to the floor, he grabs Holiday’s (MIL) arm and causes him to lose control of his dribble.”

However, that may have actually helped Boston. Since the Celtics had a foul to give, a call would have forced the Bucks to inbound the ball again. Instead, Holiday hit what would be the game-winning bucket.

Now, this is the play most people are probably wondering about the most, but the league ruled that there was nothing wrong with this call. The L2M stated that the referees were correct to call this a non-shooting foul.

This was the explanation given: “Holiday (MIL) commits a foul by making contact with Smart’s (BOS) arms before he is bringing the ball upward toward the basket. A personal foul is correctly called.”

Here, the keywords are “before he is bringing the ball upward.” The league ruled that Holiday’s contact with Smart came before he was going upward in his shooting motion.

In reality, the L2M means nothing. Even if the league said they should have called a foul on Holiday and that Smart should have taken three free throws, it wouldn’t have mattered. The Celtics still lost, and the result would not have been changed.