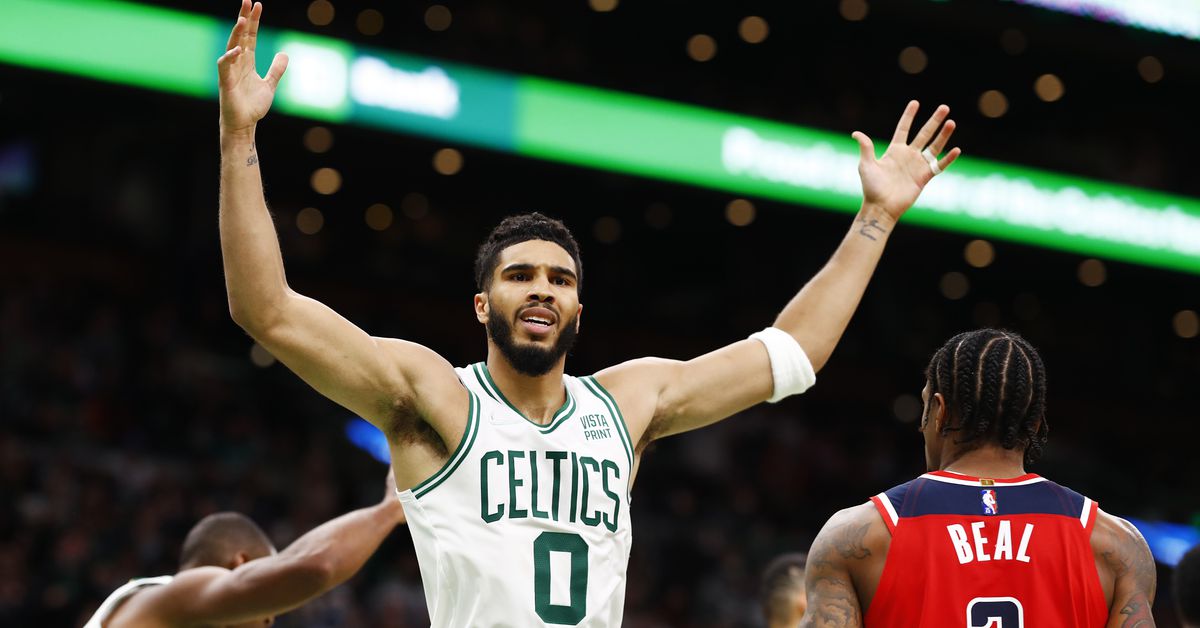 “We should never have to question effort.”

“We need come out the right way and be ready to compete.”

“We need to have the proper respect for our opponent from the start.”

“Guys tried to do it on their own too often.”

“In front of our fans, and how great they are, we need to be better than this.”

Pick a quote. None of them are good. However, all of them are accurate. And that’s what’s most worrisome about the Boston Celtics right now.

While crediting the Washington Wizards for coming into Boston and taking the game, this loss isn’t about the Wizards. It’s about the Celtics.

This is now the second year in a row where effort, intensity and focus are in question. Even worse? It’s five games into the season and this is the second time this has been the postgame conversation.

To be fair, it’s not everyone. Jabari Parker did a good job of bringing energy. Dennis Schroder did as well. Robert Williams and Grant Williams played hard throughout the game. Despite having his minutes managed, Al Horford put in a good night of work.

Instead, this falls squarely on the shoulders of Jaylen Brown, Jayson Tatum and Marcus Smart. Those three are supposed to be the Celtics leaders. Brown and Tatum are the team’s best players by a wide margin. Smart is regularly called the team’s “heart and soul”.

It’s time to start acting like it. Every night. Not just once and a while.

To be fair, every team has off nights. The NBA season is long and draining. When a team drops a game in mid-March because they didn’t bring it, you shrug and move along.

When it happens twice in the first week of the season, it’s a problem.

When it happens repeatedly over a two-year span, it’s a feature, not a bug.

The most frustrating part is easily the way every man who steps to the podium recognizes the issue. But we’ve heard that for over a year now. At least this time there haven’t been empty promises to fix it.

So often last season, versions of “Our effort isn’t there. It’s got to be better. And it will be.” were said. The last part never happened. And the Celtics limped out of the playoffs without much of a fight against a superior Nets team.

This season, we’re hearing the first part, but no one is promising it will be better. Is that a sign they’ve given up? Or are they searching for answers and don’t want to give the same old empty promises?

Brad Stevens was reticent in his public criticism of his team when he was the coach. Stevens rarely called out effort issues. Instead, he focused on tactics and strategy, while putting it on himself to correct the course.

Ime Udoka has taken a different approach. He was blunt following the loss to the Raptors last week, by saying his team got “punked”. Following this loss, Udoka was just as critical. The first-year head coach said the problems were evident at shootaround, “I told the guys this morning if they play tonight with this intensity and focus, they’d get their asses kicked. And for three quarters that’s what happened.”

Postgame, Al Horford was clearly down about the loss and the effort issues. In a soft, disappointed voice, Horford said, “We need to be committed to preparing and working before the games. We have to be better at that.”

The veteran big man seemed to be most upset about letting the home fans down, “In front of our fans, and how great they are, we need to be better than this.”

The team’s veteran voices like Al Horford, Dennis Schroder and Enes Kanter can only do and say so much. For things to actually “be better”, it has to come from Jayson Tatum, Jaylen Brown and Marcus Smart.

Tatum needs to stop whining to the officials on every drive to the basket. If you close your eyes and filter through pictures of Tatum in your mind, how long does it take to get to one where’s he’s got his arms raised begging for a call?

It’s gotten old and it’s impacted the rest of his game. He’s not defending on the level he was early in his career. Some of that comes because he’s often not getting back on defense, while he complains for a call that is never coming.

Udoka said he didn’t want to see that anymore. He pulled Tatum once after he cost Boston because of his campaigning to the officials. Does Udoka have the courage to keep pulling his star?

As for Jaylen Brown, here’s his points scored this season: 46, 9, 30, 13. Sure, the averages look great, but that’s not good. Udoka was asked about Brown’s play and called it “mind-boggling” that he could start a game so flat.

Jaylen Brown is a very good player. To be a great player, he needs to do it every night, not every other night.

Marcus…oh Marcus. This space has defended you for bringing everything to the table that the box score doesn’t measure. But the things the box score does measure are starting to turn in an untenable direction. Maybe it’s just a slump, but 25% shooting is a joke. That’s unplayable, no matter what other good things you do on the floor.

And what’s with the sleepwalking through the start of games? We’ve regularly written that “Marcus Smart makes Smart plays”, but how about throwing a few in the mix in the first quarter once and a while?

Ime Udoka wanted to name captains in the preseason. It was clearly something that was important to him and something he felt was necessary. Five games into the season, the Celtics don’t have anyone named as a captain.

When asked about it pregame, Udoka said that the captain-naming process took a backseat. The team was dealing with injuries and illnesses, as well as incorporating a new system and new players. Udoka wanted to stay focused on getting the team ready.

What he didn’t mention is that his players were, at best, lukewarm towards the captain idea. Smart, Brown and Tatum all brushed it off. Versions of “We’re all leaders” and “You don’t need to be a captain to lead” were said.

There’s only so much Ime Udoka can do as the coach. The real leadership has to come from within the group of guys who actually take the floor.

Whether that person wears a captain’s “C” doesn’t matter. They just have to lead, by example and with words.

The Boston Celtics don’t have a leader right now. The scary part? It’s not even clear they really care.