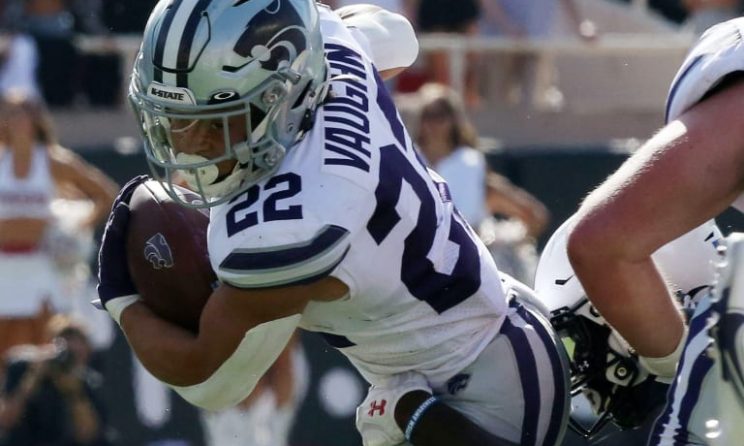 Deuce Vaughn was very productive. He finished with three touchdowns, two on the ground and the third was the go-ahead score on a nice completion from 26 yards away.

Vaughn ended with over 100 all-purpose yards, 41 rushing and 68 receiving.

Skylar Thompson did not read the field as good as he could have in the first half, but he was lights out in the second half. He got the ball to various receivers, and finished with the highest completion percentage of his entire career.

Kade Warner, Tyrone Howell and Daniel Imatorbhebhe were all involved in the passing game after being quiet for much of the season.

He has been the only shining star on the defensive side of the ball. Felix Anudike-Uzomah was a major disruptor in the backfield yet again. He even forced a safety by showing his impressive strength.

Anudike-Uzomah barreled through the offensive line, shot the gap and tackled the runner shortly after he was handed the ball. It inspired the rest of his team and gave them the ball back, which was capitalized on by the offense with a touchdown to bring the score to within five.

He also had the game winning sack on Texas Tech’s final drive.

Russ Yeast’s interception (on what the Red Raiders mistook for a free play) in the first half was key to keeping the game within striking distance. Reggie Stubblefield showed a lot of grit. He has done so whenever he’s on the field. He flies around more than anyone.

The defense was very concerning once again to begin the game. Matt Wells was able to do what he wanted on offense in the first half and even left some points out there if we are being honest.

Kansas State’s defense looked better in the second half.

Ty Zentner was perfect in both the kickoff and punting game. He can be partially thanked for the forced safety, with a beautifully placed punt inside the five yard line to set it up for K-State.

All of his kickoffs were touchbacks as well, besides his final kick where he nearly got the ball to the end zone despite being backed up 25 yards due to penalties by Malik Knowles and Eric Munoz.

Outside of that, Logan Long should be credited for saving a punt return touchdown. Knowles did well returning kicks, but he lost a fumble on the first return and Texas Tech capitalized on it and went up 14-0 in less than five minutes into the game.