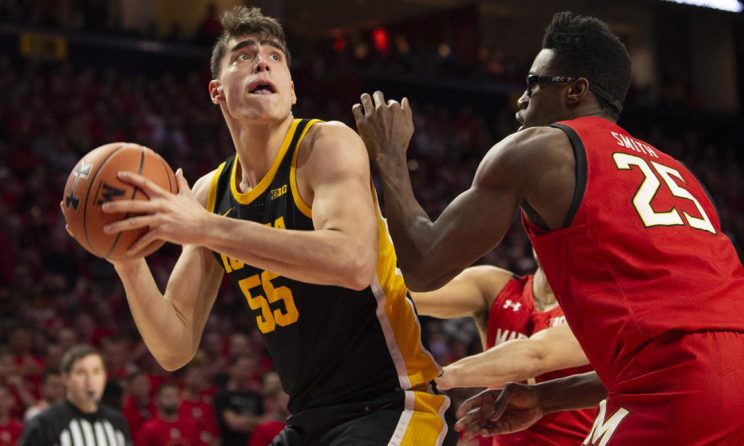 The No. 3 Iowa Hawkeyes will look to continue their home dominance when they take on the Iowa State Cyclones in non-conference action on Friday. The Hawkeyes (4-0) are 18-2 on their home court since the start of the 2019-20 season, and are coming off a 93-80 win over North Carolina on Tuesday in the ACC/Big Ten Challenge. Iowa State (1-1), meanwhile, has struggled on the road of late, going 0-11 away from home last season. Because of COVID-19, the Cyclones have not played since Dec. 2, when they dropped a 71-68 decision to South Dakota State.

The game is slated to begin at 9 p.m. ET from Carver-Hawkeye Arena in Iowa City, Iowa. Iowa is averaging 98.0 points per game, while Iowa State averages 74.0. The Hawkeyes are 12.5-point favorites in the latest Iowa State vs. Iowa odds from William Hill Sportsbook, while the over-under for total points scored is set at 158.5. Before making any Iowa State vs. Iowa picks, check out the college basketball predictions from the SportsLine Projection Model.

The SportsLine Projection Model simulates every Division I college basketball game 10,000 times. Over the past four-plus years, the proprietary computer model has generated an impressive profit of almost $2,700 for $100 players on its top-rated college basketball picks against the spread. It’s also off to a fast start in the 2020-21 season, going 5-1 on all its top-rated picks and returning over $400. Anyone who has followed it has seen huge returns.

Now, the model has set its sights on Iowa vs. Iowa State. You can visit SportsLine now to see the picks. Here are the college basketball lines and trends for Iowa State vs. Iowa:

Iowa vs. Iowa State spread: Iowa -12.5Iowa vs. Iowa State over-under: 158.5 pointsISU: Due to the COVID-19 pandemic, the Cyclones have had a nine-day layoff between games, their longest since 1934-35IOWA: Redshirt senior guard Jordan Bohannon led all scorers with 24 points against No. 16 North Carolina. Prior to Tuesday, senior center Luka Garza had led the team in scoring in 17 of the past 18 games

Why Iowa can cover

Fredrick has been red hot, averaging 11 points and 3.2 assists per game. He has hit 10 of 17 3-pointers (58 percent). Last year, he played in 25 games and set a freshman record at the school by making 46.1 percent of his 3-pointers. His 47 3-pointers made are tied for fourth-most in a season by an Iowa freshman. Fredrick scored a career-best 21 points three times last season and once this year, the last coming Tuesday against North Carolina.

Why Iowa State can cover

The Cyclones have won seven of the past 11 games against the in-state rival Hawkeyes. Leading Iowa State is senior guard Jalen Coleman-Lands, a graduate transfer from DePaul. Coleman-Lands has scored 1,101 career points and has 240 career made 3-pointers. He leads the Cyclones in scoring, averaging 14.5 points per game, hitting 46.2 percent of his field goals. He is also averaging 3.5 rebounds and 1.5 assists.

Redshirt senior forward Solomon Young has also had a hot hand to start the season. He is tied for second on the team in scoring, averaging 13 points and 2.5 rebounds per game. He is connecting on 60 percent of his field goals, second-best mark in the Big 12. It is the fifth season he has played for the Cyclones. On Dec. 2 against South Dakota State, he posted his fourth career 20-point game.

How to make Iowa vs. Iowa State picks

SportsLine’s model is leaning over on the total. In fact, it says Iowa’s Bohannon will score nearly two more points than his average, while Iowa State’s Rasir Bolton will better his average by nearly a point. It has also generated an against-the-spread pick that cashes in over 50 percent of simulations. You can only get the pick at SportsLine.

So who wins Iowa State vs. Iowa? And which side of the spread cashes over 50 percent of the time? Visit SportsLine now to see which side of the Iowa vs. Iowa State spread to jump on, all from the advanced model that is up almost $2,700 on its top-rated college basketball spread picks over the past four-plus years, and find out.