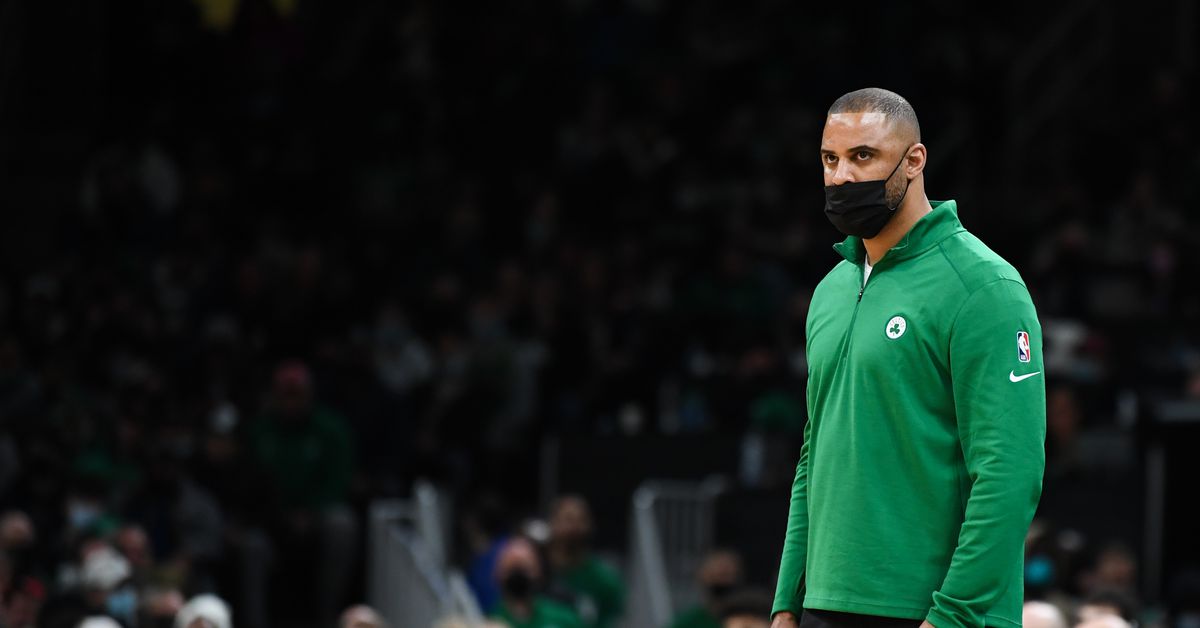 This Celtics’ season could be summed up in a single word. The one that Ime Udoka used last night to describe his locker room’s mood after yet another setback of a loss: Disappointment. Any time this team looks like it’s ready to officially turn the corner, it doubles back as though a boogeyman looms on the other side. It doesn’t matter what form that boogeyman comes in. Wide-open shots; lesser opponents; double-digit leads in the fourth quarter — they’re all threats that these Boston Celtics can’t seem to consistently overcome.

The latest example? A brutal, if not pathetic 109-105 home loss to the Portland Trail Blazers. The Celtics failed to score for more than six minutes as they watched their 11-point lead disintegrate into thin air. Boston led 100-89 with 7:19 left in the game, finishing out the final quarter 0-for-10 from the field and scoring just five points via free throws. Portland ended the game on a 20-5 run, punctuated by a corner three from Robert Covington to give the Blazers a 103-102 advantage that they wouldn’t relent. (He’s not exactly the Robert that comes to mind when you think of “Big Shot Bob,” but alas.) In a season of stomach-churning collapses, this may very well top the list.

“We had turned somewhat of a corner lately in some fourth quarters, made the proper plays defensively and offensively, and then they made timely shots as well,” Udoka said postgame. “So, felt like we took a little step back as far as that.

“It’s a little disappointing because we had been better in those situations execution-wise. And, at times, as simple as it sounds, it comes down to making some open shots. And they dared some guys to make it and took it out of [Tatum’s] hands, and we didn’t make them pay.”

No, they didn’t. The fourth quarter was a sour excuse for basketball, to say the least, and no one was exempt. When the Blazers forced the ball out of Jayson Tatum’s hands — he who went one-for-four in the final frame and has struggled mightily over the last month — the rest of the team struggled. Despite Payton Pritchard and Romeo Langford combining to go four-of-five from the field but struggling from an all-around perspective, the Celtics shot just 35 percent in the quarter, turned the ball over on four possessions, and fouled Portland seven times. There’s little to no excuse for these shortcomings, and yet they persist.

“The shooting is a part of it,” Udoka said. “We’ve seen it quite a bit this year. And the ball can’t just move around the perimeter. You have to attack. That’s the bottom line. They forced a lot of jump shots. That’s on me to get us in the situation to get the proper looks out of zone. We’ve seen quite a bit. Charlotte did some (zone) and we scored two, three times in a row and they jumped out of it. It’s a make-or-miss thing. If you can (make) wide-open zone shots, teams get out of it. But if you miss those, they’ll stay in it. Our execution wasn’t as sharp as it needs to be.”

Portland persisted with an aggressive zone defense that Boston couldn’t work around nor penetrate. Though the Celtics moved the ball at a rip-roaring rate, the Blazers never relented in their pressure. Led by Nassir Little, Robert Covington, and CJ McCollum, the visitors remained in attack mode for what felt like the game’s full 48 minutes. In response, the Celtics shot 37 threes, making just 11, good for one of their worst shooting performances of the year (29.7 percent).

“It hurts and it bothers you, as it should,” Tatum said of the poor offensive effort. “Can’t go back in time. Get back in the gym, watch some film, learn from your mistakes, and try to improve on them. That’s literally all you can do. We just gotta stay healthy and put a run together. We’ve had some bad losses but we’ve beat the best teams. We’ve just got to be more consistent and be better more often than we have.”

Now, Tatum’s not exactly wrong. The Celtics have indeed gone toe-to-toe with some of the league’s best teams. Just last Saturday, they came back to beat the Bulls by two in Boston; they convincingly whooped the Pacers by 19 in Indiana on Jan. 12, two in-Conference wins Udoka was quick to point toward last night; and yes, they’ve logged wins over contenders like Phoenix, Cleveland, and Milwaukee. But these convincing dubs are sporadic in comparison to consistent duds. Nothing has changed in order to make the latter less frequent, and the empty justifications keep on coming.

“We’ve been progressing the right way,” Udoka said, “so that’s why this one does sting more than the others… That’s one that hurts.”