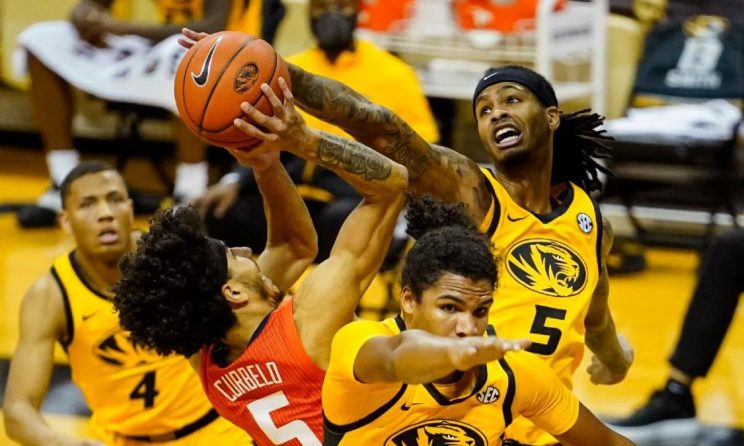 Missouri pulled off Saturday’s biggest upset by gutting out an 81-78 win over No. 6 Illinois and extended its winning streak to three in the Braggin’ Rights rivalry series. The Tigers did it in impressive fashion, too, leading for nearly 36 minutes of game action and for the entirety of the second half.

Equally impressive as the win was how Missouri, miraculously, withstood an offensive eruption of epic proportions from Illini guard Ayo Dosunmu. Dosunmu had a career-high 36 points on 13-of-20 shooting in the loss. He did his best to pull the Illini back back from a 13-point second-half deficit but came up just short. His 3-pointer just before the buzzer that could have potentially sent the game to overtime came up short.

It was the second defeat of the season for Illinois, who lost to No. 2 Baylor on Dec. 2

The win is Missouri’s most monumental on the season as it improves to 5-0 with two wins over AP Top 25 teams, and in terms of sheer significance, it’s the program’s biggest since at least the 2014-15 season, when it knocked off No. 5 Florida. Coming into the game the Tigers had lost three-straight home games against opponents ranked inside the top 10.

It’s also a potential arrival point for Cuonzo Martin and Mizzou, who, by and large, have been flying under the radar. Missouri improves to 5-0 with the win and its top wins thus far, over Oregon and now Illinois, should stand the test of time as it builds an NCAA Tournament-caliber resume.

Instrumental in the win was Xavier Pinson, Dru Smith and Mark Smith, the team’s three-leading scorers who all managed to string together big games in the biggest game of the season. Pinson and Dru Smith each had 17 points, while Mark Smith had 6 points and a pair of rebounds. Kobe Brown added 12 points and eight boards and off the bench, Javon Pickett added 14 points and five boards.

Illinois likely won’t have many games this season like the one it played against Mizzou: it got outrebounded 35-26, shot above 52% from the field, and still came away with the loss. But struggling to find consistency shooting 3-pointers was a problem against the Tigers — the team went 3-of-13 from deep — and it’s an issue from last season that thus far has no definitive answer. Freshman sharpshooter Adam Miller went 0-for-3 from beyond the arc and the trio of Dosunmu, Damonte Williams and Trent Frazier made a combined three outside shots.

The talent level combined between Dosunmu and his big man sidekick, Kofi Cockburn, should be enough to keep the Illini in contention for a Big Ten title this season and much more. But solving the question of who steps up beyond those two may be a nightly task for coach Brad Underwood, and the clock is ticking: Conference play begins Tuesday at home against an unbeaten Minnesota squad.