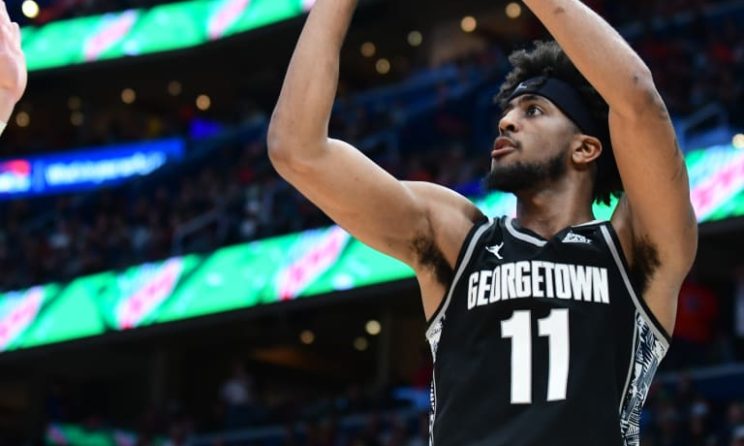 “The turnovers, we had 20, 21 of them i think” lamented acting head coach Louis Orr, in his second such game as such on The Hilltop. “They scored 29 points (off them). For any team but especially St. John’s, you’re putting yourself at a disadvantage”.

The biggest offenders were sophomore forward Collin Holloway with a game high six giveaways, followed by classmate/point guard Dante Harris and freshman guard Aminu Mohammed. Both of the latter were attributed with four turnovers each. The Johnnies were credited with 10 as a team.

Orr also thought SJU’s style made it harder for his team, as their full court pressure diminishes the time available for shots, further highlighting the importance of turnovers.

Graduate forward Kaiden Rice led the Hoyas with 19 points on 7-22 shooting overall, 5-14 from three point land. Orr lauded him for getting “on the ground a few times for loose balls” and that Rice “competed pretty hard. I think that’s a big deal for us with him. You just go gotta play both ends of the court. I thought he gave very good effort”.

Joining Rice in double figure scoring were Mohammed and Harris with 13 apiece.

Rebounding is one aspect the Hoyas won, pulling down 39 to 32. Mohammed paced the game with 12 caroms secured.

Alexander and Champagnie both pulled down six rebounds for St. John’s, who next takes the court 1.18.22, traveling to Creighton for a 7p EST tip off.