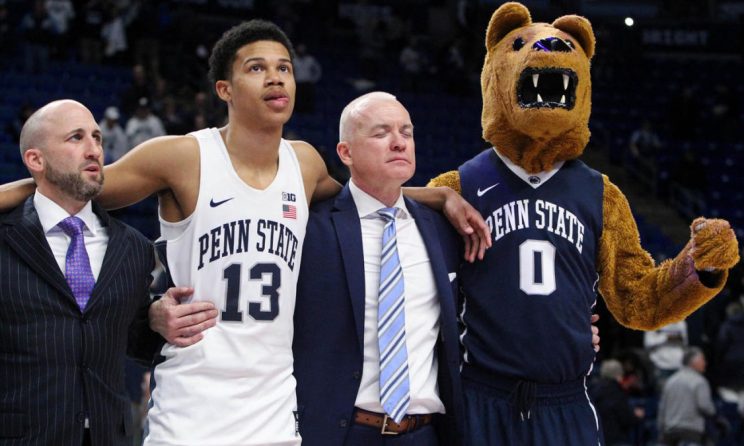 Just a little over eight months ago, Penn State basketball cracked the top 10 for the first time since 1996. The Nittany Lions were 20-5 and jockeying for a top spot in the Big Ten standings while ninth-year coach Pat Chambers received adulation for finally breaking through in a tough job.

It’s been all downhill since for Penn State as the Nittany Lions lost five of their final six games, fell out of the AP Top 25 and were robbed of the opportunity to play in their first NCAA Tournament since 2011. Chambers was accused of racial insensitivity by a former player a few months later and on Wednesday he resigned.

Jim Ferry, who spent the past three seasons as an assistant for Chambers, will take over as the interim coach for the 2020-21 season. But the Nittany Lions will be looking for a new head coach in the months to come. The good news is that they should have plenty of candidates to pick from. There was just one power conference opening following the 2019-20 season (Wake Forest), and Penn State will be first in line to get its pick on this go-around of the coaching carousel.

For this week’s edition of the dribble handoff, our experts weigh in on who Penn State should hire as its next basketball coach.

The Penn State job is a hard job — arguably one of the most difficult jobs in any Power Five conference. The school has only been to four NCAA Tournaments since 1965, only two since 1996. And when you combine that fact with the fact that Pat Chambers was reportedly making just $900,000, it’s reasonable to assume the candidate pool will be limited to assistants and mid-major coaches.

So where should Penn State look?

In my opinion, the goal should be to hire somebody who has already been a consistent winner at whatever level because, at a place like Penn State, you’re never going to have better players than most of the other programs in the Big Ten, which is why you better have somebody who can really, really coach. It’s an approach currently working at Rutgers, where Steve Pikiell was hired away from Stony Brook after finishing first or second in the America East four straight seasons. Like Penn State, Rutgers is a difficult job. But Pikiell, a proven winner and respected teacher, had the Scarlet Knights positioned to make the NCAA Tournament last season before the event was canceled, and he’ll enter this season with a team ranked 21st in the CBS Sports Top 25 And 1. So, if you’re Penn State, why not focus on the guy who has been running the America East since the moment Pikiell left — namely John Becker? At Vermont, Becker has gone 109-28 over the past four seasons, a record that includes a 59-5 league mark. He’s secured four straight America East regular-season titles resulting in four straight America East Coach of the Year awards. So Penn State could do a lot worse than to look to the same conference where Rutgers found somebody capable of winning at a hard job in a tough league in an attempt to replicate the Scarlet Knights’ recent success. — Gary Parrish

A rising star in the coaching profession, Jeff Boals has ample experience as an assistant and a burgeoning head coaching resume to buoy his candidacy here at a place like Penn State. Boals is entering his second season as the Ohio coach, where he’s off to a nice start. But he really showed his chops at his last stop, where he took the reins of Stony Brook from Steve Pikiell and had the Seawolves winning 24 games by his tenure’s end. Boals also has an impressive pedigree as an assistant, most notably at Ohio State, where from 2009-2016 he served on Thad Matta’s staff and helped recruit the likes of D’Angelo Russell and Jared Sullinger. He doesn’t quite have the credentials to make a significant jump to a top-tier gig — at least not yet — but he’s a winner at the mid-major level who may give serious consideration to a job like Penn State that has power conference standing and an opportunity to prove he belongs at the highest level in coaching. — Kyle Boone

David Cox is 39-24 in two years as Rhode Island’s coach after stints working under Jamie Dixon at Pittsburgh, John Thompson III at Georgetown and Dan Hurley at Rhode Island. He also worked under Mike Rice at Rutgers, which means the Nittany Lions would need to do a thorough bit of homework before going this route. But if everything checks out, Cox has the right combination of power conference experience, head coaching experience and the proper geographic background to succeed at Penn State.

What Cox does with Rhode Island this season will be particularly interesting to watch after the Rams lost a few key players to transfer. That could be cause for concern with a coaching candidate. But Cox has done a great job of bringing transfers in to replace those who have left. If he can blend them together with star guard Fatts Russell and keep Rhode Island on a winning trajectory this season, Cox could be a great option for Penn State. — David Cobb