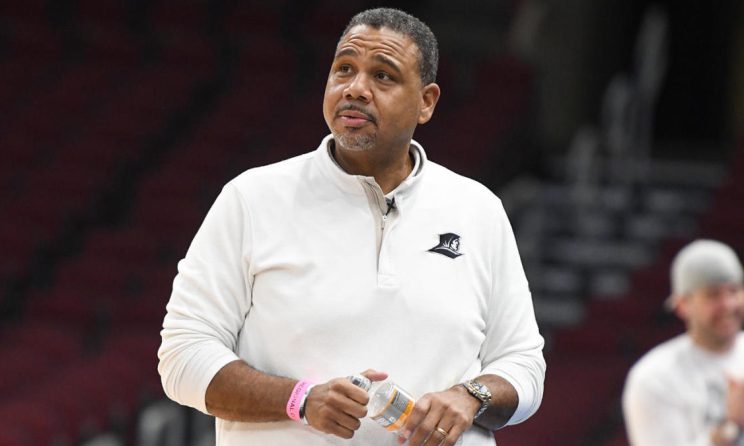 The parallels between college basketball and horse racing are minimal, but one trait both sports share is that their fanbases each love to bet on underdogs. It was less than two months ago when the nation began falling in love with Saint Peter’s as the No. 15 seed Peacocks made a miraculous run that began with an all-time-great upset of Kentucky in the first round of the NCAA Tournament.

Could a team with such long odds in this era of college basketball win the national title? While the NCAA Tournament regularly produces unexpected deep runs from poorly seeded teams, it’s usually a big name that ends up hoisting the trophy in the end. With the help of early national title odds from Caesars Sportsbook, our writers are looking ahead to the 2022-23 season and paying homage to Rich Strike by picking the team with odds of 80-1 or worse who they think could capture the national title trophy next season.

I obviously don’t believe any team with 80-1 odds (or worse) is winning a national title. It’s possible but improbable. That said, I’ll go with Dayton because the Flyers are the highest-ranked team in my Top 25 And 1 that meets this question’s criteria. They’re 100-1 to win the 2023 NCAA Tournament — but I like them better than that. Dayton is returning the top five scorers from a team that was literally the last to be cut from the 2022 NCAA Tournament. Four of those players — among them former top-100 high school prospect DaRon Holmes, who averaged a team-high 12.8 points and 6.1 rebounds — were freshmen who will be sophomores. If they develop and grow together properly, the Flyers should compete with Saint Louis at the top of the Atlantic 10. — Gary Parrish

It’s hard to envision anyone that’s +7000 or worse winning the 2023 title, but then: that’s the point of this post. Gimme Ed Cooley’s guys. The Friars are coming off their first regular-season Big East title in program history, a Sweet 16 run for the first time under Cooley and will bring back Jared Bynum. Louisville’s Noah Locke (9.6 ppg), South Carolina’s Devin Carter (9.0 ppg) and Kentucky’s Bryce Hopkins (a paltry 2.1 ppg) could easily transition to having big-time transfer seasons the way Al Durham and Noah Horchler did last season. The Big East will also be a bit more for the taking next season. Creighton is probably the favorite, but Villanova will be more of an unknown in ’22-23 than at any point in the past decade. Program momentum is there, and it’s not hard to see the Friars getting a 5-seed or better again. They’re my Rich Strike candidate. Speaking of that, there might not be a coach I’d rather see work the track than Cooley. — Matt Norlander

LSU fired Will Wade just before the 2022 NCAA Tournament and shrewdly snagged Matt McMahon from Murray State. Since his arrival, McMahon has effectively made LSU the Murray State of the South — but in the most endearing way possible — by grabbing transfer commitments from three of the Racers’ top four scorers last season on a team that went 31-3 and did not lose in Ohio Valley Conference play. LSU also has two top-100 incoming recruits and three other committed transfers in NC State’s Cam Hayes, Mississippi State’s Derek Fountain and Northwestern State’s Kendal Coleman. The Tigers are a total wild card — how Murray State’s talent transfers up is a question, and replacing effectively the entire roster is a major unknown — but McMahon is a revered tactician who appears to be starting with a clean slate in Baton Rouge. If the unknowns become knowns, and good knowns at that, then LSU could emerge out of nowhere from an interesting program on the come-up to a real contender next season. — Kyle Boone

If coach Jim Larranaga can foster some depth out of the youthful back half of his roster, his team could build off its 2022 success and be a dark horse national contender next season. The Hurricanes are losing a couple of studs from their Elite Eight team in Kam McGusty and Charlie Moore. But with the help of booster John Ruiz, they have landed two of the top-ranked transfers this offseason in former Kansas State guard Nijel Pack and ex-Arkansas State forward Norchad Omier.

Star guard Isaiah Wong is coming back after threatening to leave if his NIL compensation wasn’t increased. He’s expected to be joined by veteran contributors Anthony Walker and Jordan Miller. Those three, combined with the two big-time incoming transfers, give Miami a formidable and experienced starting five. Replacing the rim protection provided by graduated big man Sam Waardenburg will be among the hurdles. But if four-star freshman center Favour Aire can help out, this team can be in the hunt even with odds that currently sit at 150-1. — David Cobb