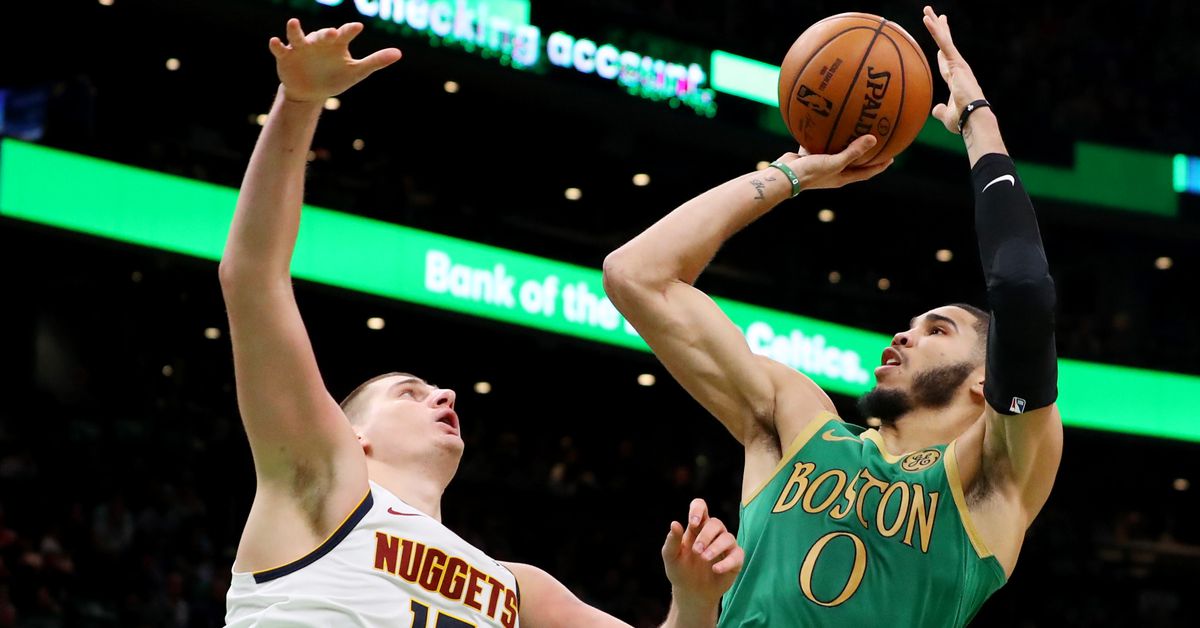 The Celtics were active at the trade deadline sending out Dennis Schroder, Romeo Langford, Josh Richardson, Enes Freedom, Bruno Fernando, Bol Bol, and PJ Dozier. They are bringing in Derrick White from the Spurs and former Celtic Daniel Theis from the Rockets. At this time there is no one on the injury list but also it isn’t known at this time if the trade will be finalized and if the new players will be in town and able to play. Celtics are also reportedly signing Sam Hauser and Luke Kornet to deals for the rest of the season.

The Nuggets did not make any trades at the deadline but are expected to sign DeMarcus Cousins to a 3rd 10 day contract. Monte Morris is out with a concussion and I’ve listed Bones Hyland as the starter but that’s just a guess. Vlatko Cancar is out after having foot surgery. Michael Porter, Jr is out after having back surgery. Jamal Murray is out after ACL surgery. Austin Rivers is probable with a hip injury.

Robert Williams III vs Nikola Jokic
Jokic is impossible to stop but the Celtics must try to slow him down. He is averaging 25.9 points, 13.7 rebounds and 7.9 assists. He is shooting 57.8% from the field and 37.5% from beyond the arc. He has had a triple double in 7 of his last 12 games. Robert Williams needs a big game defensively for the Celtics to have a chance in this one.

Jaylen Brown vs Will Barton
Barton is averaging 15.5 points, 4.9 rebounds, and 4.1 assists. He is shooting 44.4% from the field and 37.5% from beyond the arc. The Celtics will need Jaylen Brown to continue playing like an All-Star snub on both ends of the court.

Honorable Mention
Aaron Gordon vs Jayson Tatum
Gordon is averaging 14.6 points, 5.6 rebounds, and 2.6 assists. He is shooting 52.0% from the field and 33.7% from beyond the arc. The Celtics will need good Jayson Tatum for this game and hopefully he will be able to hit his shots.

Effort and Energy – The Celtics must be the more aggressive team. They have to fight for loose balls, defend aggressively, be aggressive in driving to the basket, and just play harder than the Nuggets for the entire game. The Celtics have been winning games with extra effort and high energy. They have to be the team that wants it more and play like it. They especially have to begin the game with energy and not allow the Nuggets to race out to a big lead.

Bench Play – In the Nuggets’ win over the Knicks on Tuesday, their bench scored 61 points. They didn’t make any moves at the deadline although they have several players out. The Celtics traded 3 key reserves in Dennis Schroder, Josh Richardson and Romeo Langford. We don’t know if Theis and White will be available so the Celtics bench will be short handed for this game. The reserves who are available to play will need to step up on both ends of the court.

X-Factors
Trade Factor – The Celtics will be missing several players that have had key roles for the Celtics. Dennis Schroder and Josh Richardson especially have been key in the Celtics recent wins. Romeo Langford has also played well in his minutes off the bench. The Celtics will be shorthanded and will have to re-figure their rotations and possibly get used to new players. Will that affect their chemistry?

Officiating – I know that I say this every game, but the officiating can always be an x-factor. Every crew calls the game differently whether they call every little ticky tack foul or they let a lot of contact go and let the teams play. The Celtics have got to adjust to the way the game is being called and not let the calls affect their focus or their play.