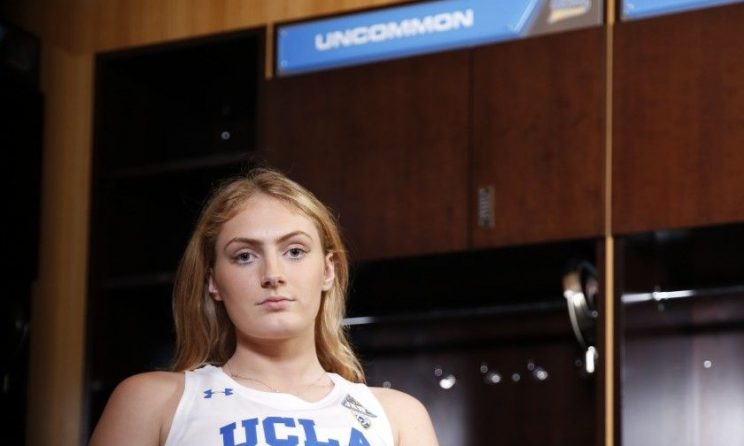 UCLA freshman forward Izzy Anstey is one of more than 16 international athletes at UCLA and Loyola Marymount who have been unable to play this season because of immigration policies regarding COVID-19. (Courtesy of Izzy Anstey)

When the UCLA women’s basketball team ran onto the court for its long-awaited season opener against Cal State Fullerton on Nov. 27, Izzy Anstey tuned in from her family’s home in Melbourne, Australia. She cheered as the Bruins scored a blowout win. She cried at the same time.

Anstey wished she could have been there.

Despite signing a national letter of intent to attend UCLA in November 2019, Anstey, a 6-foot-4 forward, is one of more than 16 international athletes at UCLA and Loyola Marymount unable to join their teams because of immigration policies regarding the novel coronavirus.

Because UCLA and Loyola Marymount are not offering many in-person classes during the COVID-19 pandemic, the international athletes had their certification forms deferred, even though they have approved student visas. The athletes are now united in a lawsuit against the Department of Homeland Security and Immigration and Customs Enforcement to gain entrance into the country with hopes of getting a hearing in the U.S. Court of Appeals as soon as Dec. 11.

The clock is ticking, especially for Anstey and UCLA guard Gemma Potter.

“That was always our hope throughout this whole lawsuit: just try to get there for the first game,” said Potter, a 6-foot guard from Australia. “Seeing that dream crushed in a certain way while sitting on my couch not being able to play was quite hard to watch.”

The lawsuit covers athletes from sports including rowing, golf, soccer, basketball and volleyball, and eight different countries, including Australia, New Zealand, Norway, Britain and Canada. The athletes are not named in the lawsuit, and 15 are signed with UCLA and one with Loyola Marymount.

UCLA has about 25 international freshmen signed across their 25 varsity sports. Kirk Pasich, the attorney representing the athletes, says more could join the effort after a district judge was unable to grant an injunction on Nov. 20, despite ruling that the athletes were being irreparably harmed by the policy. The lawsuit moved to the Ninth Circuit Court of Appeals.

The group filed a motion on Nov. 24 to expedite the hearing in appeals court, but the government opposed the effort on Dec. 1. If the court grants the motion to expedite, a decision could come this week. Without the expedited hearing, the court may still have a decision by the end of this month, but the case could drag on to mid-January and may not be finished until March or April. Basketball season could be over by then.

The delay is the latest setback for Anstey and Potter. They expected to join their team in the summer, but the date was pushed back from June to August. Then it was delayed until September.

Australian basketball players Gemma Potter and Izzy Anstey try to stay connected with their USC teammates, but Anstey feels they are “falling behind from a game perspective.” (Courtesy of Izzy Anstey)

“It’s really difficult mentally with trying not to get your hopes up,” the Australian youth national team player said. “But how do you not get your hopes up about starting a college career in another country where the basketball is the best in the world for your age level? You can’t not get excited, but every time we get excited, it’s another obstacle to get around.”

Reconciling past requirements that stated international students could not take more than one online class per term with the adjustments required during the pandemic created complicated policies this summer. In July, the government issued guidance requiring international students whose classes had transitioned to online-only instruction to leave the country.

Less than three weeks later, the government backtracked and split continuing students from new students. Returning students could re-enter the country, even if all classes were online, but first-year students couldn’t start their college careers. Australian junior Chantel Horvat rejoined the Bruins in September, but her freshman teammates coming from the same country stayed home.

“We can’t get into the country to pursue our goal and dream that we’ve wanted for so long,” Potter said. “We’ve been rejected by the country that we’ve signed our national letter of intent to.”

The lawsuit calls the designation between first-year and returning international students “arbitrary,” and treating them differently “would be capricious and not consistent with law.”

Every time coach Cori Close looks at her bench, she’s reminded of the impacts the months-long saga has had on her team. Her roster is reduced to eight scholarship players, but the situation is less about basketball than it is about integrity.

Anstey and Potter stay connected with the Bruins almost every day, speaking with coaches and teammates via Zoom or Facetime. They can take online classes and study game film to prepare for the day they finally play. Despite the 19-hour time difference, support is available “around the clock,” Anstey said.

The constant communication reminds the Australians why they have not entertained options to transfer to another school that provides in-person classes so they could enter the U.S.

Izzy Anstey, a freshman forward at UCLA from Australia, doesn’t know if she’ll be allowed to play for the Bruins this season. “It’s really difficult mentally with trying not to get your hopes up,” she says. (Courtesy of Izzy Anstey)

Living in neighboring cities in Victoria, Australia, and having played together since they were 14, Potter and Anstey lean on each other to navigate the life in limbo. With Australia easing lockdown restrictions, they can meet for short indoor workouts, when they spend practice time refining individual skills and lifting weights.

The work doesn’t compare to what they could accomplish if they were with the Bruins though, learning the team’s pressing defensive style and new motion offense. Anstey said she and Potter are “falling behind from a game perspective.”

UCLA is short-handed to start the season. Watching the Bruins beat Fullerton by 50 points in the season-opener, Potter was impressed with how they played, but recognized the need for bench reinforcements.

When they get to campus, the Australian freshmen will give UCLA versatile players with the skillsets ideally suited for an offense inspired by the position-less basketball popular in the international game. At night, Anstey has dreams of doing just that as she envisions herself playing in Pauley Pavilion.

Then she wakes up, still 7,000 miles away from her future.