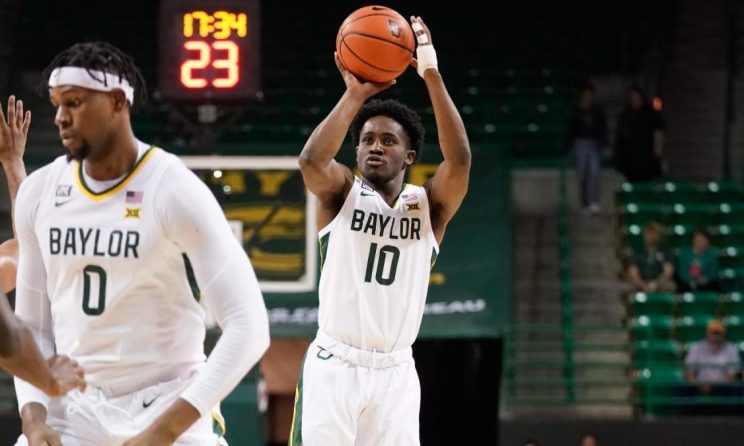 College basketball is ringing in 2022 with a nice slate of games on Saturday as conference play begins to ramp up. Though plenty of games will not be played as scheduled due to COVID-19 issues, there will still be plenty of action to unpack on a day that also shares the spotlight with college football bowl games. Among the highlights are three games on CBS, a showdown between No. 1 Baylor and No. 8 Iowa State and a hastily thrown together non conference matchup between No. 6 Kansas and George Mason.

In some ways, Saturday marks a fresh start even amid all the disruptions to the schedule. Some programs will look to put rough November and December stretches behind them as league play arrives, and others will look to prove that their excellent starts can carry over into conference play.

Iowa State certainly fits the latter category as the 12-0 Cyclones prepare to tangle with the 12-0 Bears. Few would have seen ISU’s perfect start coming after the program limped to a 2-22 record last season. But first-year coach T.J. Otzelberger is working wonders so far, and his program will have the sport’s center stage for a home showdown with the defending national champions.

Here are the expert picks for that game and for a few of the day’s other big tilts.

12 p.m. | CBS, CBSSports.com, CBS Sports App (Free) — Both teams are off to disappointing starts, and home court advantage hasn’t been a huge help to Wichita State, which has home losses against Kansas State and North Texas. With the Shockers playing their first game since Dec. 22, expect some rust. If Memphis gets a couple players back who missed the Tulane loss on Wednesday, the Tigers should look more like the team that beat No. 19 Alabama by 14 points than the one which lost to Tulane. Prediction: Memphis 81, Wichita State 77

2 p.m. | CBS, CBSSports.com, CBS Sports App (Free) — Villanova is incredibly reliant on 3-pointers, ranking 20th nationally with 28.7 long-range attempts per game. For a team that plays at a slow pace, the treys account for a staggering portion of its offense. It’s been a recipe for success in the past, but against Seton Hall it’s a risk. Opponents are shooting just 26.1% against the Pirates from deep this season, which means Seton Hall is No. 12 nationally in 3-point shooting defense. Look for the Pirates to stifle Villanova’s outside shooters and use their physicality on offense to get the Wildcats in foul trouble. Prediction: Seton Hall 72, Villanova 66

2 p.m. | ESPNU,  fuboTV (Try for free) — This massive Big 12 battle between two of the country’s four remaining unbeaten teams will be a duel of the defenses as No. 1 Baylor plays just its second true road game inside what should be a hostile Hilton Coliseum. Both rank among the top-10 nationally in points allowed with Baylor allowing just 56.8 per game and Iowa State allowing only 56.1. The difference is that Baylor has an elite offense as well, and that will be enough for the Bears to overcome the road environment. Prediction: Baylor 73, Iowa State 63

4 p.m. | CBS, CBSSports.com, CBS Sports App (Free) — It’s the first game since Dec. 22 for both teams, so don’t be surprised if tired legs lead to some erratic offense on both sides. The kicker here is San Diego State’s elite defense, which is holding opponents to just 58.5 points per game. The Aztecs should be able to fire the defense right back up and stifle UNLV’s offense. Prediction: San Diego State 65, UNLV 58

George Mason at No. 6 Kansas

5 p.m. | ESPN+ — This game is a late addition brought about after George Mason’s scheduled A-10 opponent for Sunday, Duquesne, couldn’t play due to COVID-19 issues. Similarly, Kansas was set for its Big 12 opener against TCU on Saturday until the Horned Frogs encountered COVID-19 issues. George Mason has wins at Maryland and at Georgia already under first-year coach Kim English, but the Jayhawks are a superior team and will have no trouble. Prediction: Kansas 84, George Mason 60