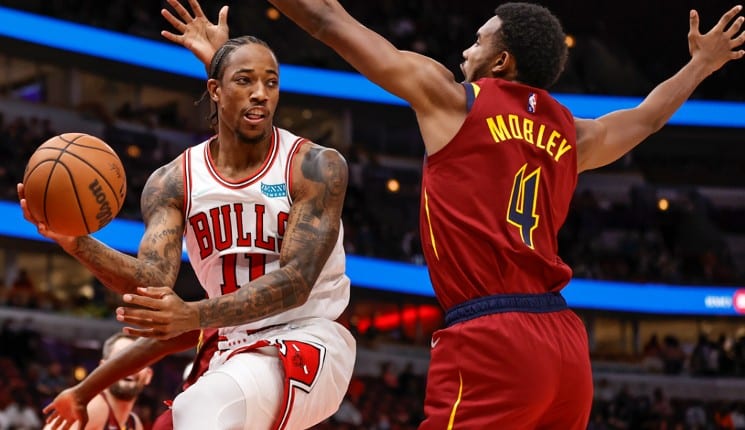 In tonight’s Eastern Conference contest, the Chicago Bulls (17-8) are playing the Cleveland Cavaliers (13-12) at Rocket Mortgage FieldHouse. Will Zach LaVine and the Bulls extend their win streak to five games?

Leading into Wednesday night’s Eastern Conference game, the Bulls are 17-8 against the spread in the 2021-22 NBA season, whereas the Cavaliers are 19-5-1 against the spread. This exciting matchup will air live at 7 p.m. ET through Bally Sports Ohio, NBA League Pass and NBC Sports Chicago. Pertaining to Land of Basketball’s database, based on 222 regular season head-to-head games played all-time, Chicago is 129-93 versus Cleveland. Nevertheless, in the previous three meetings, the Cavs are 2-1 against them.

On Apr. 21, 2021, the last time these teams played one another, Cleveland won 121-105. In other news, the Bulls are dealing with a COVID-19 outbreak. DeMar DeRozan, Coby White, Javonte Green and Matt Thomas are on the injury report because of the virus. Early Wednesday afternoon, the organization added Thomas to the list. Chicago can go without some players, but the team missing DeRozan is a bigger problem. The 13-year veteran is averaging 26.4 points, 5.3 rebounds and 4.1 assists per game this season.

Bulls have an outbreak https://t.co/ANjMbCdG4R

Additionally, on Monday, in the Bulls’ 109-97 home win over the Nuggets, forward Zach LaVine led his team in scoring, putting up 32 points in 39 minutes played. Nikola Vucevic and Lonzo Ball each added another double-double to their NBA career totals. Both players had 20 points and 10 rebounds in their performances. While the Nuggets outscored the Bulls 27 to 18 in the opening quarter, Chicago still scored 63 second-half points.

Meanwhile, in the Cavaliers’ 112-104 road loss against the Bucks on Monday, center Jarrett Allen led his team in points and rebounds, contributing a total of 25 points and 9.0 rebounds in 38 minutes of action. Forward Lauri Markkanen closed out his night with 20 points, 7.0 rebounds and 2.0 assists in 34 minutes played. In spite of the Cavs’ near-perfect shooting at the free throw line, they failed to sink several of their short-range jump shots.

For noteworthy betting trends, the Bulls are 5-1 ATS in their past six performances. The total has also gone over in seven of their last eight games. To add to that, Chicago is 5-1 straight up in the team’s previous six contests. Next, the Bulls are 4-1 ATS in their past five road games this season, and the total has gone over in seven of the team’s last eight matches played at Rocket Mortgage FieldHouse. Lastly, they are 4-1 SU in their previous five contests versus Eastern Conference opponents.

As for the Cavaliers, they are a flawless 8-0 ATS in their last eight games. Also, the Cavs are 1-5 SU in their past six home contests. And, the total has gone under in four of Cleveland’s preceding six games played on a Wednesday. Finally, they are 3-7 SU in their prior 10 matches versus Central Division opponents. Ergo, after reviewing these betting statistics and the injury report, the Cavs are the better option. Think about picking them to win and cover the spread.

Pick the Cavs to win, they will cover the spread and the total will go over 209.5. Cleveland is a three-point favorite with BetUS.