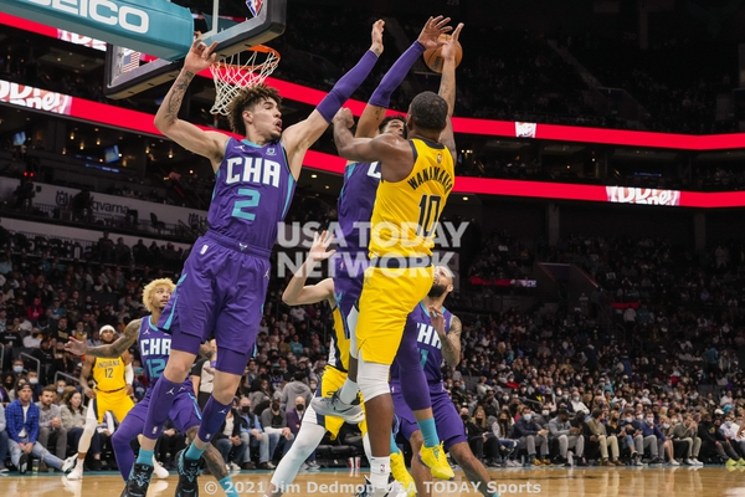 In Wednesday night’s Eastern Conference clash, the Charlotte Hornets (18-17) are playing the Indiana Pacers (14-20) at Gainbridge Fieldhouse. Will Malcolm Brogdon and the Pacers earn their first head-to-head win versus the Hornets since Feb. 25, 2020?

However, the Hornets are a flawless 4-0 against them in their past four head-to-head games. On Nov. 19, 2021, the second meeting this season, Charlotte won 121-118 at Spectrum Center. In other news, Hornets head coach James Borrego informed media reporters that small forward Jalen McDaniels could take over for Miles Bridges in tonight’s matchup versus the Pacers. This season, the third-year player is averaging 6.8 points, 3.7 rebounds and 1.1 assists per game. His field goal shooting percentage is also 52.2%.

James Borrego said Jalen McDaniels could start again in Miles Bridges’ place when the #Hornets play in Indiana tomorrow. He liked how McDaniels fit with the first group last night. Also said he could go smaller and force the bigger Pacers to match up with them.

Hornets will be without Miles Bridges, PJ Washington and Scottie Lewis Wednesday night in Indy. All three are in the health and safety protocols.

I expect for Brogdon and Lamb to be questionable. They’re day-to-day.

Furthermore, on Monday, in the Hornets’ 123-99 home win over the Rockets, guard Terry Rozier led his team in scoring, accumulating 27 points in 27 minutes played. Kelly Oubre Jr. closed out his performance with 18 points and 3.0 rebounds in 30 minutes spent on the court. Charlotte scored a total of 64 first-half points. The Rockets have several road losses, but this was still a terrific win for the Hornets.

According to ESPN’s Basketball Power Index, the Pacers have a 50.7% chance of winning.

As for the Pacers, in their 113-105 road loss versus the Bulls on Sunday, guard Caris LeVert scored a team-high 27 points in 39 minutes of action. Forward Myles Turner contributed 19 points, 5.0 rebounds and 2.0 assists in 36 minutes played as well. While Indiana did out-rebound Chicago 45 to 40 and generated 62 points in the key, the team’s defensive effort was not sufficient.

As for the Pacers, they are 1-4 ATS in their last five performances. Also, the total has gone over in 10 of their previous 15 contests. And, Indiana is 5-1 SU at home in the team’s past six games. Next, the Pacers are 0-4-1 ATS in their last five matches versus Southeast Division opponents. Considering these betting statistics, think about picking the Pacers to win and cover the spread. If you want to test your sports betting knowledge, check out our handicap betting guide.

Pick the Pacers to win, they will cover the spread and the total will go under 229. Indiana is a three-point favorite at home with BetOnline.