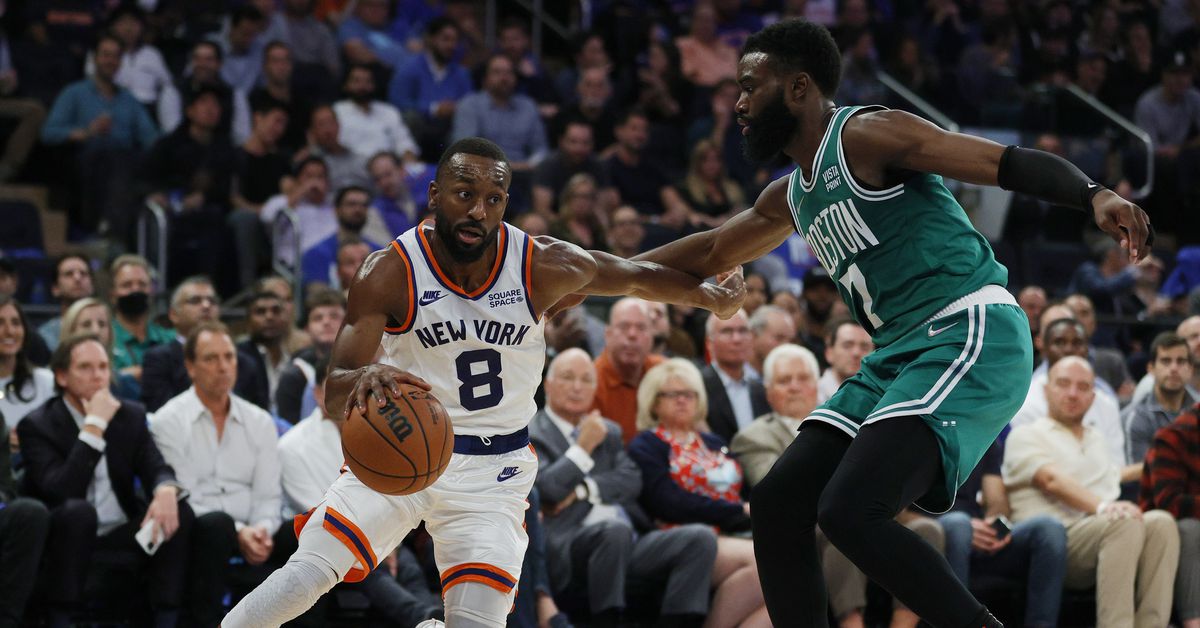 The Boston Celtics and the New York Knicks, two of the original franchises from when the NBA got its start 75 seasons ago, tipped off the 2021-22 season tonight. The show we got tonight definitely lived up to all the franchise history on display. Jaylen Brown (46 points, 9 rebounds and 6 assists) had transcendent first and fourth quarters, but it wasn’t enough to topple the Knicks in a 138-134 loss that went to double OT. Julius Randle gave the Celtics plenty of work himself, putting up a sensational 35 points, 8 rebounds and 9 assists in a losing effort.

Tonight was not Jayson Tatum’s night. He finished with 20 points and 11 rebounds, but that came on 7-30 shooting (23%). That’s why the Celtics have more than one Jay. Brown scored 14 points in the opening minutes of the game (and eventually 25 points in 12 minutes), showing no rust after missing the last 3 preseason games and a handful of practices after contracting COVID-19. Brown gave the Knicks inside buckets, outside, buckets, and-ones and freethrows. Any way they want it, he gave it to them.

Robert Williams played 45 minutes, and when he was on the court, he played exceptionally on both ends, starting and finishing impressive fastbreaks. He finished with 16 points, 10 rebounds and 6 blocks (and only 1 foul). Romeo Langford showed that his preseason and Summer League confidence was not a fluke, burying shot after shot off the Celtics’ bench.

Boston had a tough time containing Julius Randle. He was incredible, especially in the first half when he basically made up the advantage that Jaylen Brown created on his own. He led a 12-0 Knicks run that put New York back in the game after the Celtics pulled away. Randle’s scoring was a big emphasis, but after he got it going, he created a ton of offense for his teammates. Kemba Walker (10-8-3) never really got it going in his debut for the Knicks, but Evan Fournier proved why he was an early target for the Knicks, backing up Randle with 32 points.

The Celtics rode Brown’s early scoring to a big lead, but struggled from midway through the second quarter into the fourth quarter. The Knicks started percolating in the third, opening up a ton of opportunities in fastbreak situations. The young guys in New York – Obi Toppin and RJ Barrett – were a huge spark, putting in 14 and 19 points, respectively.

The Knicks got their largest lead of the night midway through the fourth, and the Celtics basically handed them that with sloppy turnovers. Marcus Smart, who was poised for most of the night, did some good things to jolt the offense before doing some very bad things to hurt the offense and the defense.

All seemed lost for the Celtics who were down 8 late in the game. Fast-forward to under 30 seconds left, Jaylen Brown hit a logo 3-pointer over Evan Fournier, followed by some ill-advised Knicks defense leading to Marcus Smart (15-8-6) draining a 3-pointer as time expired to send the game to OT.

Overtime was WILD, starting with a shootout that featured three Evan Fournier 3-pointers and a bunch of Celtics 3-pointers to match before Tatum came up short at the buzzer, sending the Celtics and the Knicks to double overtime.

Double overtime was a basically “our team is more tired than yours and here’s the proof.” A whole host of blown layup/dunks was the theme of the early going. Unfortunately, Fournier and Randle found their legs late while the Celtics didn’t, and Boston starts the season 0-1.

Boston will travel back home for the team’s home debut against the Toronto Raptors on Friday at 7:30 p.m. EST.