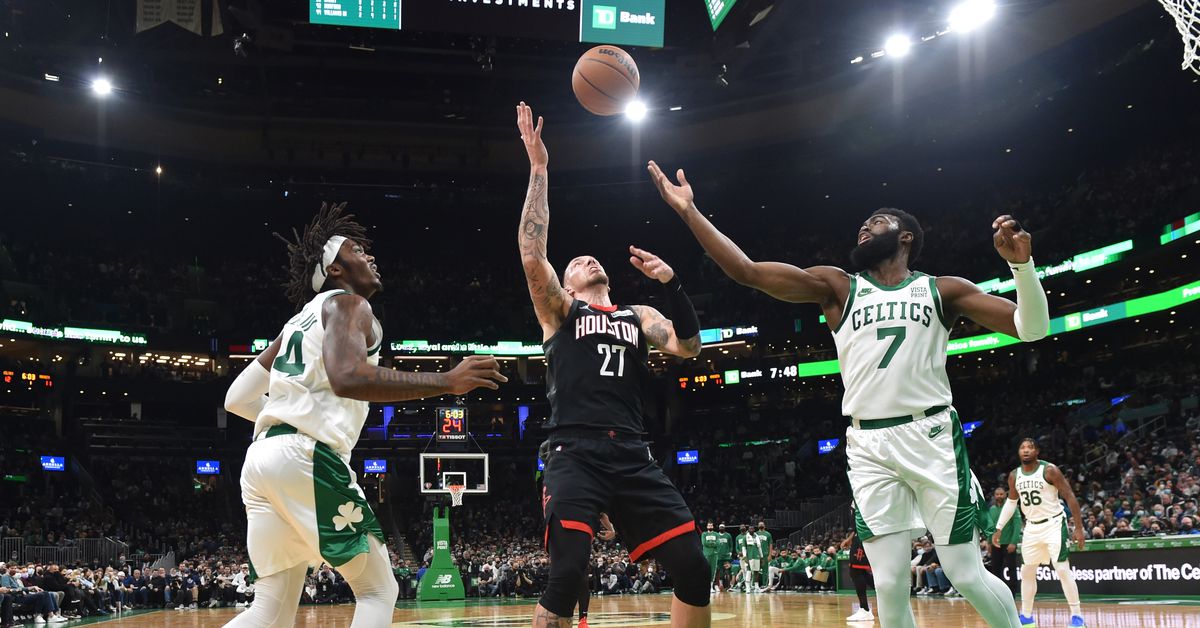 The Boston Celtics took care of business tonight against the Houston Rockets, winning 108-90 despite a sloppy start. Jayson Tatum was a major reason why, pacing the Celtics with 30 points to go with 6 rebounds and 3 assists. That’s his fourth game in a row with 30+ points. For the Rockets, none of the starters were especially notable, but Armoni Brooks (shoutout to RDCWorld1) put in 17 points off the bench.

Jayson Tatum was excellent of course, but while Jaylen Brown got off to a slow start in his first game back from a hamstring injury, he woke up in the third quarter to contribute to a huge run to start the period. Brown finished with 19 points in 22 mins. Al Horford chipped in 11 points, 11 rebounds and 4 assists. Robert Williams only put up 2 points in his return, but that came with 15 rebounds in 23 minutes. Dennis Schröder came back off the bench this game with Brown’s return, contributing 18 points. Romeo Langford had a solid night on both ends, finishing with 10 points.

No Rockets starter scored in double figures. No. 2 overall pick Jalen Green managed to put up 9 points after lighting up Boston for 8 3-pointers back in October as Boston was seeking its first win. Thankfully, we didn’t see a repeat performance tonight. Old friend Daniel Theis put in 7 points and 4 rebounds. No Rockets starter shot better than 37.5% from the field.

The first half was a little sloppy as Boston got used to being full health again. In the second quarter alone, the team threw the ball away 7 times. The defense was a little wonky, and the rotations were questionable at times from Ime Udoka. When the team came out of the lockroom after halftime, it was like a switch flipped. The Celtics opened the third quarter with a 24-3 run. The Cs ultimately won the third quarter 34-16.

Some sloppy play kinda let the Rockets back into it before the Celtics completely slammed the door shut instead of giving up another meltdown. Jayson Tatum and the bench put it away, and then Aaron Nesmith REALLY put it away with back-to-back 3-pointers in two possessions to put Boston up by 29.

The Celtics improve to 10-8. Up next, the Brooklyn Nets who are fresh off a win tonight against the Cleveland Cavaliers. They’ll match up at 7:30 p.m. EST on ESPN on Wednesday evening.

For more postgame coverage of the Celtics’ beatdown of the Rockets, tune into the the Garden Report Postgame Show LIVE on CLNS Media right after the game. Join A Sherrod Blakely, Bobby Manning, Josue Pavon, Jimmy Toscano and host John Zannis for a full breakdown. Plus, the guys will discuss Jaylen Brown’s return to the lineup.