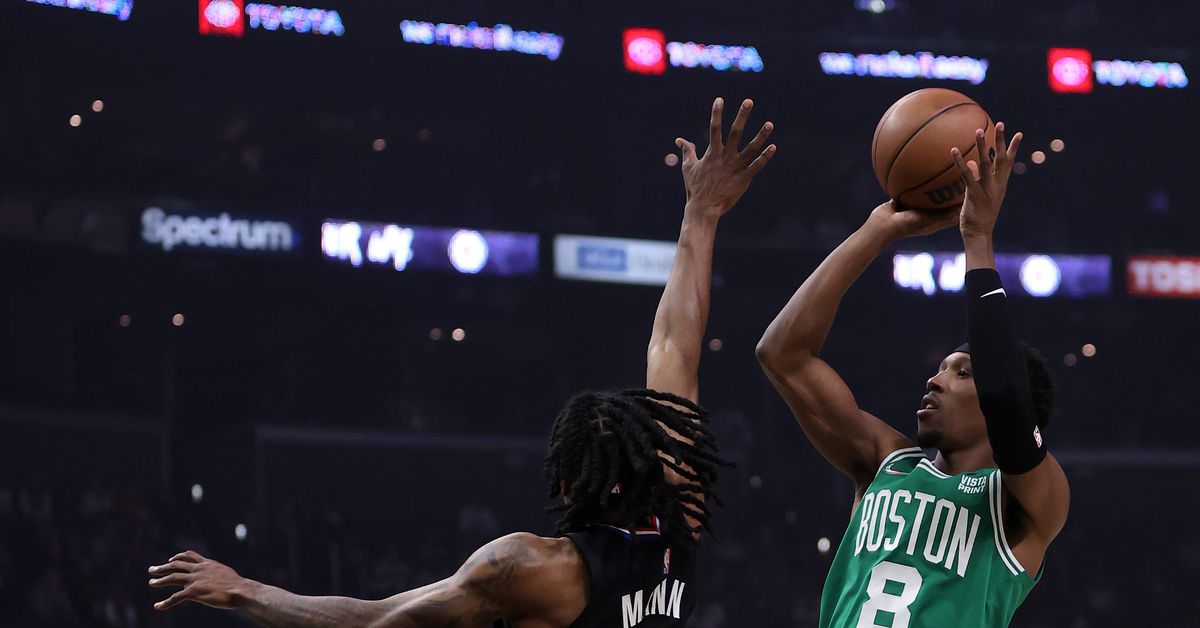 On the Boston Celtics’ second straight night in Los Angeles, the court was different, the opponent was different but, unfortunately, the result was not. After losing to the Lakers on Tuesday, Boston made it closer against the Los Angeles Clippers on Wednesday, but still fell short 114-111.

The Celtics shot well and had more rebounds and assists than the Clippers, but the game was determined by two things: 1. Boston turned the ball over 22 times, leading to 33 Clippers points and 2. a Clippers rookie played the game of his life.

Both teams entered the game with a record of 13-12. The Celtics were again without Jaylen Brown, while the Clippers were also shorthanded without late scratch Paul George (elbow contusion). Also, Kawhi Leonard has yet to play this season as he recovers from a torn ACL.

The Marcus Smart to Robert Williams lob has become an early-game staple:

The second quarter was a train wreck. LA stymied the Celtics’ offense with a zone defense and scored 15 points off 8 Boston turnovers. A 6-point Boston lead became a 10-point LA lead with 4 minutes until halftime.

The main force was Brandon Boston, Jr., a second-round pick who averages 4.5 PPG. He had what seemed like an out-of-body experience in the quarter, playing all 12 minutes, shooting 7-of-8 (4-of-5 from the arc) for 18 points, plus a pair of steals. Boston, Jr.’s highlights included overpowering Smart for a layup, stealing a Jayson Tatum pass and going all the way for a slam, picking up a technical for trash-talking the Celtics bench, and swishing a turnaround, desperation 30-footer to beat the halftime buzzer. Clippers 63, Boston 51.

Early third quarter was more of the same. The Celts continued to turn it over and the deficit grew to 76-55. But suddenly…

Grant Williams closed out on Boston, Jr. at the arc, and the rookie swung his arms and caught Grant in the chin with an elbow — a flagrant 1, and the momentum changed. The Celts began to make shots, the Clippers couldn’t buy a hoop, and a 20-3 run brought the C’s to within 79-75. Tatum, who’d done nothing to that point, came alive with 12 points in the quarter. LA regrouped a bit in the last two minutes and led 87-78 heading to the fourth.

An 8-0 run put LA back in control, then the Celtics countered with a 10-0 run. When Dennis Schroder made a pair of threes it was a 5-point game with 1:42 to go. When Tatum made a steal and a layup, it was 108-105 with a minute left. But Marcus Morris, Sr. swished a triple with Al Horford in his face for a 6-point lead.

Tatum made two free throws, then Smart stole the ball from Reggie Jackson and fed Tatum for a breakaway, 111-109. Celts fouled to stop the clock with 12.8 seconds left, and Jackson made just one of two.

The Celts tried to foul again but couldn’t do it until 1.6 seconds remained. Zubac made both to out the lead back to 3 points. With no timeouts, Tatum took a halfcourt heave that went wide.

Boston had five players in double-figures, led by Tatum with 29. For the Clips, Boston, Jr. finished with 27 and four steals.

The Celtics road trip will conclude on Friday night at 10 p.m. Eastern versus the Phoenix Suns, one of the league’s top teams at 20-4. The game will be televised on NBC Sports Boston and ESPN.