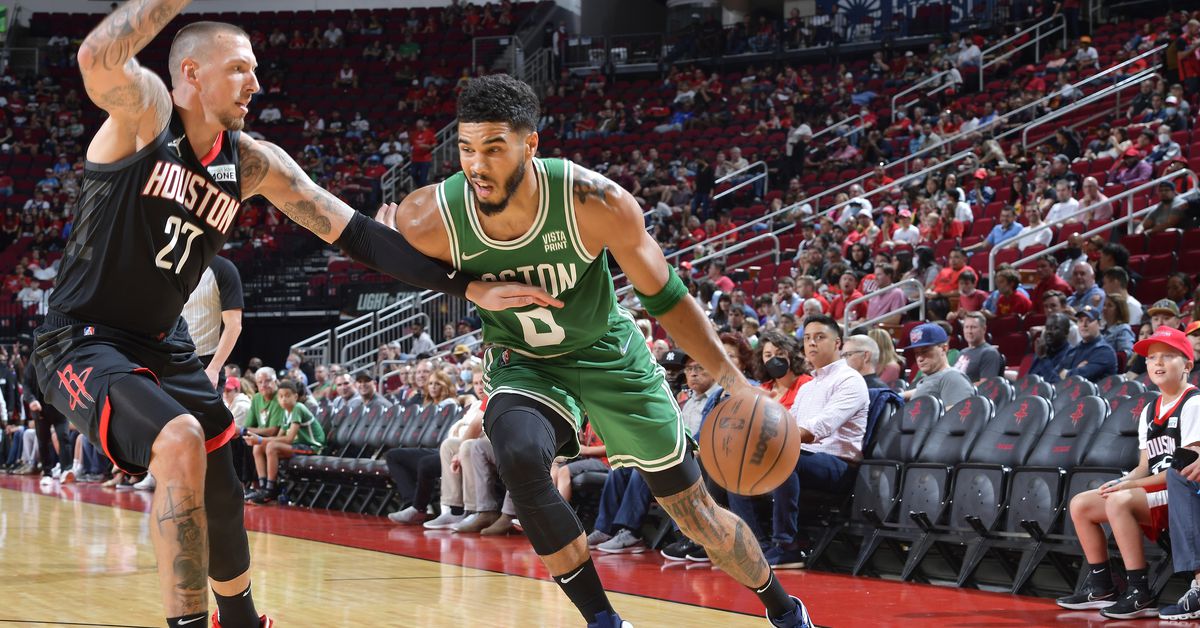 The Boston Celtics haven’t solved all of their problems, but they solved enough to get the 107-97 win tonight over the Houston Rockets behind Jayson Tatum’s offensive and defensive master class as he put up 31 points, 9 rebounds, 1 steal, and 1 block. For the Rockets, rookie Jalen Green backpacked his team in just his third pro game to reach 30 points.

Boston’s offense was horrific in the first quarter. Jaylen Brown sitting out due to knee tendinopathy certainly didn’t help, but it looks like the team still needs more time to gel (as we saw in the second half). In the first half, Marcus Smart’s offensive game continued to struggle as the starting point guard (though his defense was exceptional tonight), and Dennis Schröder didn’t jolt the offense much either. The first quarter was worrisome, but the team really caught its stride in the second quarter as the team’s best passers naturally created looks outside of established plays.

Fans expecting Jalen Green to break out after scoring 9 points in each of his first two games would have been wise to bet against the luck of the Celtics. Naturally, he went off in the first half, hitting six 3-pointers and finishing with with eight 3-pointers on 10 of those shots. Christian Wood (20 points, 9 rebounds) punished Boston’s interior, and Kevin Porter Jr. (15 points) actually had Houston’s offense looking better than Boston’s at times despite his 8 turnovers. Old friend Daniel Theis played a solid supporting role for Houston as well, finishing with 6 points and 5 rebounds.

Unrelated, but this was really cool and a sign that Boston started to loosen up on offense:

More natural passes and cuts like this would be a breath of fresh air for this team. And that’s what happened in the third quarter as the Celtics worked to extend the lead. Smart and Dennis Schröder (18 points, 5 rebounds, and 5 assists) got more comfortable on offense, and that opened up so many actions as Tatum continued his scoring dominance.

Another player who made his mark on the third period was Al Horford (17 points, 10 rebounds, 3 steals, and 3 blocks). He bullied Houston’s interior while also defending Boston’s interior to the point where we collectively said “he’s already 35?” Shoutout to the Oklahoma City Thunder for sending him home early last year. Boston outscored Houston 36-21 in the third period, and that’s really the story of the game despite a fourth quarter run from the Rockets.

That run was fun, though. Jalen Green put on a SHOW in the fourth, setting Rockets franchise history for most 3-pointers by a rookie. It’s his third game.

After 25 turnovers against the Toronto Raptors, the Celtics cleaned things up to give the ball back to the Rockets just 10 times tonight.

The Boston Celtics have a quick turnaround as they play the 3-0 Charlotte Hornets tomorrow night at 7 p.m. EST.