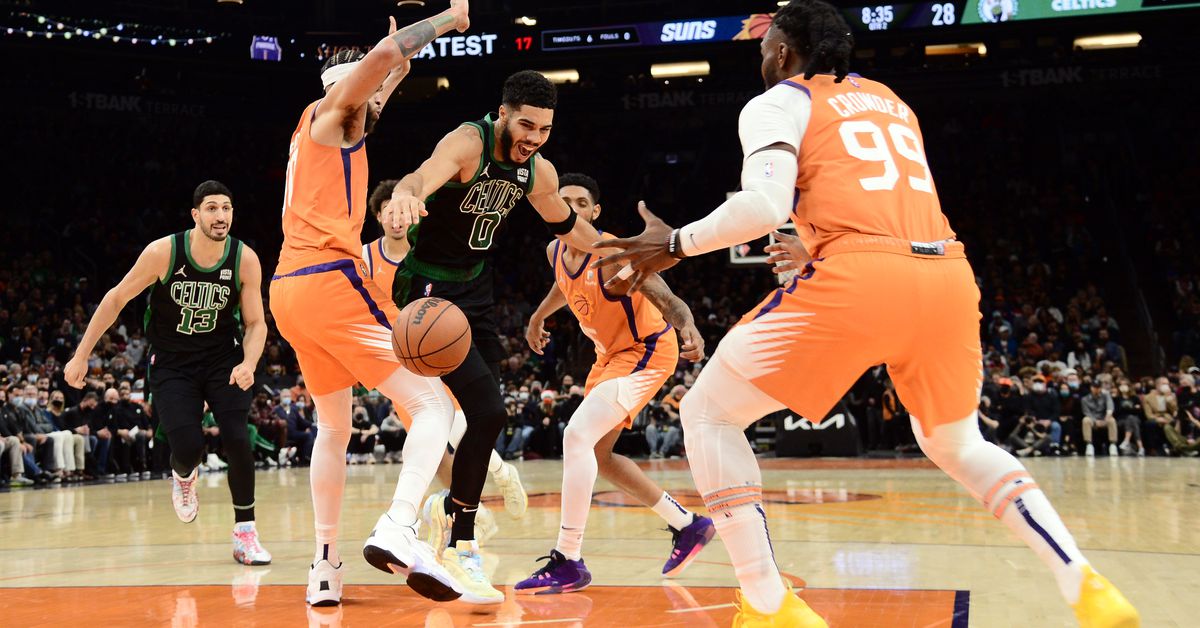 After two consecutive losses in Los Angeles, the Boston Celtics took on the Phoenix Suns tonight. Unfortunately, the Celtics’ issues from their loss to the LA Clippers carried over into this one. They ended up getting demolished, 90-111.

Jayson Tatum dominated the first quarter, tallying 12 points, and it was that domination that set the tone for the rest of the game… in the worst way possible. Tatum scored the majority of his points in isolation, and the rest of the team followed suit. The C’s didn’t move the ball well all night long and it showed up in the box score.

The Celtics finished the game with 13 assists on 35 total baskets. Meanwhile, Suns point guard Chris Paul had 12 dimes by himself. On a night where Phoenix was missing Devin Booker, DeAndre Ayton, Frank Kaminsky, and others, Paul had the Suns’ offense flowing beautifully. He kept the ball moving and everyone on the Suns was active off the ball.

Tatum ended the night with 24 points, Dennis Schroder scored 15, but the rest of the team combined for only 39 (not including garbage time). Marcus Smart, in particular, struggled mightily, shooting 1-for-13 on the game. He wasn’t just missing buckets, either, he was barely even hitting the rim. On the flip side, Phoenix had seven different players crack double-digit scoring numbers. One squad played as a team, and the other played for themselves.

This is exactly the sort of thing head coach Ime Udoka talked about after Boston’s loss to the San Antonio Spurs a couple of weeks ago:

“It’s habits that we need to break. Not trying to go isolation. We got Marcus, Jaylen, Jayson, and Dennis starting. They need to learn to play together, not try to just get baskets for themselves.”

The C’s fell right into that trap once again. Everyone was trying so hard to make something happen on their own, that they abandoned any sort of offensive game plan. However, their defense wasn’t there to save them as it has been in the past. After a 2-5 start, the Celtics went on a run thanks to their elite defense. They aren’t playing at the level anymore. Boston allowed at least 111 points in every game on their west coast road trip.

Players were helping when they shouldn’t be, slacking off of solid shooters, and missing rotations completely. Udoka was visibly frustrated on the sidelines with Boston’s defensive presence and effort. Phoenix rained down threes and got quality looks in the paint because of their great movement, but also because of the Celtics’ permeable defense.

Boston picked up the pace in the third quarter, but their lapses in the second quarter made their lives infinitely harder – the same story as the Clippers game. The big difference between the two games, though, is that the Suns are simply a better basketball team than LA. In addition to their

Phoenix scored 32 points in the second, while Boston only tallied 15 – their lowest-scoring second quarter of the season so far. That second quarter included an 0-for-9 performance from three for the C’s, as most of their attempts came by way of isolation basketball. Their inconsistencies shined through in a big way once again.

The C’s finish 1-4 on their current road trip and have fallen back down below .500 on the season (13-14). They now have a two-day break before returning home to take on the Milwaukee Bucks, who have only lost once this season when all three of their starters play. The C’s just barely took down Milwaukee earlier this season, but the team was without both Giannis Antetokounmpo and Khris Middleton. The game on Monday tips off at 7:30 pm and can be streamed on NBC Sports Boston.

For more postgame coverage of tonight’s loss in Phoenix, tune into the Garden Report Postgame Show LIVE on CLNS Media right after the final buzzer. Join A. Sherrod Blakely, Bobby Manning, Josue Pavon, Jimmy Toscano and host John Zannis for a full breakdown of the game, a review of Boston’s 1-4 road trip, and what next week could bring with home games against the Bucks, Warriors, and Knicks.