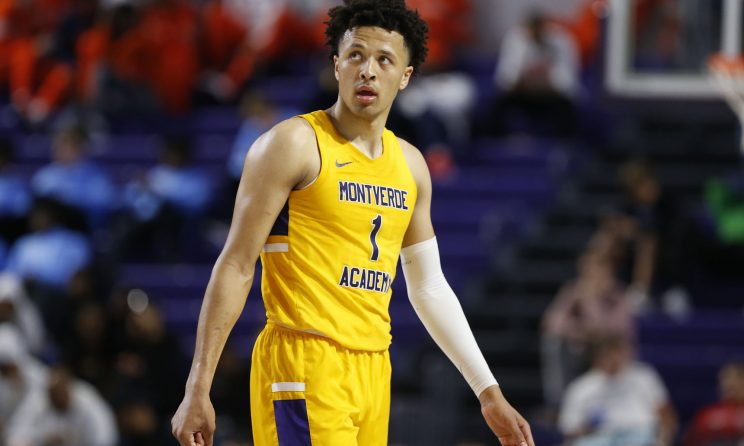 The 2021 draft class is one of the most talented and deepest in recent memory. There is a lot of potential star power at the top of the draft and plenty of long, playmaking guards projected to go in the first round. The McDonald’s All American game and Nike’s Hoop Summit were both canceled in 2020 so NBA scouts haven’t seen the top freshmen prospects in person yet. Due to the ongoing coronavirus pandemic, NBA teams also can’t attend college practices this year giving a slight advantage to the few players that joined the G League Ignite team. Despite all the restrictions, the three players at the top of this draft, Cade Cunningham, Jalen Green and Evan Mobley, have been on scout’s radar for a few years now and will hopefully have a full season to showcase their elite skill set.

Here is a way-too-early look at Yahoo Sports’ projected first round in the 2021 NBA draft.

Cunningham is a lethal guard with great size and a high basketball IQ. The 6-foot-8 point guard chose Oklahoma State over Kentucky, Florida and North Carolina. Cunningham can score at all three levels and is an elite passer in the open court. It could end up being a two-way race between Cunningham and Jalen Green for the top pick next year but as things stand now, Cunningham is edging out Green as the top prospect.

Green is a long, bouncy guard who was one of the first five-star prospects to join the inaugural G League team this season. Jonathan Kuminga, Daishen Nix and Isaiah Todd are also playing alongside Green in a team stacked with talent. Green is an ultra competitor who averaged 31.5 points, 7.5 rebounds and 5.0 assists per game as a senior at Prolific Prep.

Mobley is an elite shot-blocker who moves extremely well for a player his size. He is solid in the pick-and-pop option and a little bit of an anomaly due to his size and the way he can handle the ball. He has a 7-foot-5 wingspan and averaged 18.6 points, 10.9 rebounds and 2.7 blocks per game at Rancho Christian High School.

Williams played his senior year at Sierra Canyon high school alongside Bronny James and BJ Boston. He is a great playmaker who can also make tough shots in the lane. Williams can defend positions one through four on defense thanks to his size and athleticism. He chose Stanford over North Carolina, USC, UCLA, Oregon and Arizona.

Kuminga was the No. 1 junior in high school before reclassifying and signing a contract with the G League Ignite. He is one of the most athletic wings in this draft class who can score at all three levels and is dangerous in transition. It will be interesting to see how well Kuminga and Green play together being two ball-dominant players on the same team. Top high school prospects will be watching Kuminga and Green closely to determine if forgoing college benefits them in any way coming draft night.

Boston is one of two Kentucky guards that could be lottery picks next year. He is a pure scorer who has improved his handle since high school. Boston will let it fly from all over the court and recently made 1,000 shots at the Kentucky training facility gearing up for the upcoming season. Kentucky’s pro day was live on ESPN and Boston looked polished for a young freshman entering coach John Calipari’s system.

Suggs was a highly-ranked quarterback in high school as well as a five-star basketball recruit. He made the difficult decision to give up football and focus on his basketball career after his senior season. He will most likely play only one year for Hall of Fame coach Mark Few and Suggs will be the floor general leading a very talented Gonzaga team. Suggs is a true lead guard who always seems to make the right play and is one of the best point guards in this draft class.

Duke has reloaded, bringing in a very talented freshman class led by Johnson. He’s a skilled wing that shows glimpses of Jayson Tatum in his game. There’s no better coach than Mike Krzyzewski to help polish his game and prepare Johnson for the next level. He can play positions one through four and has a solid handle for his 6-foot-9 frame.

Shannon Jr. is a high flying lefty who is a must-watch player this year. He has a quick first step off the wing and good control in the lane. Defensively, he locks down players consistently and has the potential to be a great defender at the NBA level due to his size and footwork. Shannon Jr. needs to work on his outside shot and finishing with his right hand. He averaged 9.8 points and 4.1 rebounds during his freshman year at Texas Tech.

Barnes chose Florida State over Kentucky, Miami and Oregon. He played high school ball with Cade Cunningham at Montverde Academy as part of the most talented high school team in recent memory. Barnes does a little bit of everything on the court. He’s listed as a forward but is comfortable bringing the ball up and creating for others. Barnes has a 7-foot-2 wingspan and can guard multiple positions on the court. He plays with a lot of emotion and will be a fun player to watch this season at Florida State.

Coach Roy Williams is looking to rebound after his worst season ever last year. Luckily, North Carolina had the No. 1 recruiting class coming in led by Love. The aggressive, lead guard will be replacing Cole Anthony and has a lot of talent around him like Day’Ron Sharpe, RJ Davis and Walker Kessler. Love can break down defenses with his quick handle and finds different ways to finish in the lane.

Kentucky has a loaded class coming in with two potential lottery picks in Boston and Clarke. Clarke is a flashy player who already has an NBA frame at 6-foot-7. He’s a great athlete and showcases his impressive vertical in the open court. He is a strong ball-handler and needs to develop his 3-point shot this year at Kentucky to be a triple threat at the NBA level.

Johnson is a tough player who plays way bigger than his listed 6-foot-5 frame. He is super bouncy and a physical wing who rebounds well. He averaged 14 points, seven rebounds and shot 54% from the field last season. If he improves his outside jump shot, he could surprise a lot of people in next year’s draft.

Johnson was the breakout player at the USA Basketball training camp last year with multiple NBA scouts in attendance. He’s super quick and sneaky bouncy and a solid defender. Tennessee has a lot of talent in the backcourt this year and Johnson could help contribute to a lot of easy baskets with his quick hands. Johnson has a lot of upside as an NBA perimeter player.