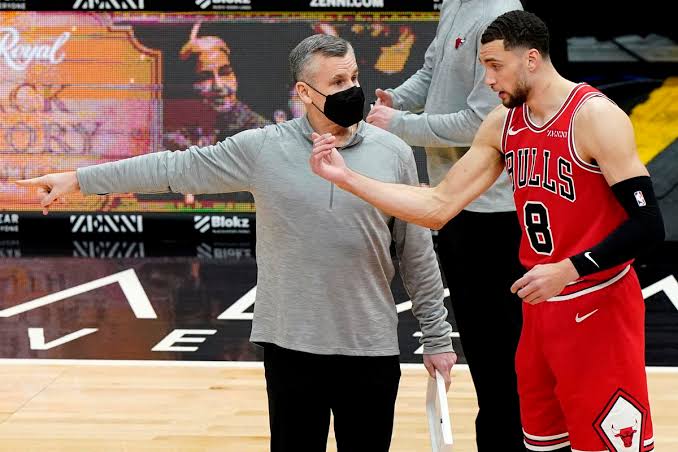 The Chicago Bulls are considered as the big-time winners of the last offseason. After an active pursuit of General Manager Mark Eversley and Executive Vice President of Basketball Operations Arturas Karnisovas, Chi-town managed to obtain multiple All-star DeMar DeRozan, solid floor general Lonzo Ball, and energizing guard Alex Caruso — attaining the utmost attention of the fans across the basketball land.

As such, exciting times await for all the loyal fans of Chicago after molding a formidable lineup. Yet, there’s one person in the group that may seem to be the most thrilled one to crash on the upcoming season.

That is Zach LaVine.

And his head coach, Billy Donovan, sees the warming interest in him to move forward in terms of leadership.

In an interview within the Advocate Center, Donovan stated that the high-flying star guard is establishing himself very well as an alpha of the team.

“This training camp, he’s been off the charts. He’s been absolutely incredible. And not from a playing standpoint, but what’s coming out of his mouth is really, really great.”

The 56-year-old mentor mentioned also the curiosity that boils around LaVine who has the best chance now to lead the franchise with a much reliable supporting cast.

“He’s seeing the game in a way that, I would say, are the things impacting winning and losing. I think sometimes when you’re a talented player, you can rely a lot of times on your own individual talent and scoring. He’s starting to realize, ‘Okay, how do I lead? How do I bring four guys with me? How do I stay locked in defensively?’”

The 26-year-old swingman also learned a lot from his recent Olympic stint, winning a prized gold medal alongside those great leaders in the likes of Kevin Durant, Damian Lillard, and Jrue Holiday.

“You can see a lot of growth in his messaging to the team in terms of what he’s trying to establish as it relates to habits and identity, and a commitment, and a focus,” Donovan told reporters. “He walks that every day and I admire him for that.”

Amongst the active players, LaVine will enter the 2020-2021 season with most games played (411) without any postseason experience. Now, having a legitimate shot with the revamped Windy City, he will try to end the drought that is associated in his name.