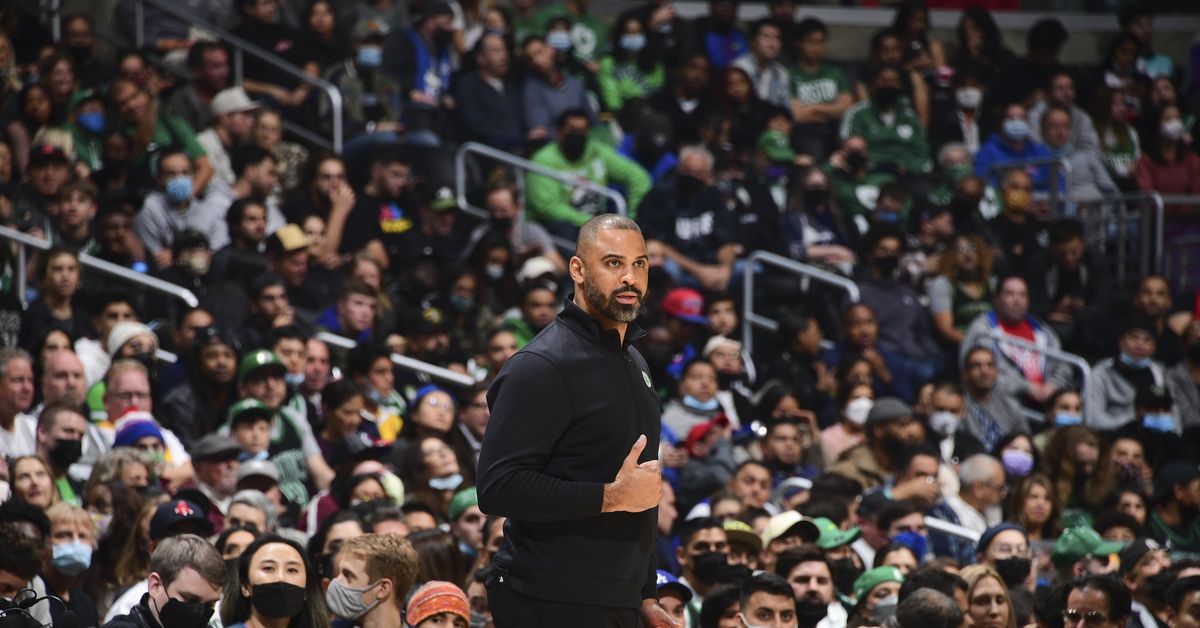 Glancing at a box score from last night’s 114-111 loss at the hands of the Los Angeles Clippers hardly does it any justice. It appears that the Celtics won three of four quarters, something that typically constitutes a victory, but last night merely showed how short Boston came up in that losing quarter. They won three periods (the first, third, and fourth) by a total of 13 points, but lost the second by 16, a collapse that felt much too early for this Celtics team, but simultaneously felt all too familiar. The Celtics went 0-2 in Los Angeles this week because they were unable to do the thing that has plagued them for consecutive seasons now: play consistent basketball.

“The effort and the inconsistency is frustrating at times,” head coach Ime Udoka said following last night’s game. “… But to play as well as we did in the first quarter, if you look at it, we won three quarters with the exception of that second quarter with that 39-23 margin. Like I said, it dug us a hole and a lot of it was self-inflicted with the turnovers.”

Let’s unpack that statement for a moment, starting with the turnovers. Udoka is right in saying many of the damage done was self-inflicted, and yes, that can start with being unable to take care of the ball. Entering last night’s tilt, Boston ranked ninth in the league, giving up 13.6 turnovers per game. But last night’s whopping 22 turnovers — sure, just the second time this season that they’ve had more than 20 in a game — dropped them to 13th, and bumped that average up to 13.9/game.

But the key point Udoka makes is that, despite playing well in the first quarter, and despite making a series of runs in the second half, his team’s energy and ability to be consistent floundered, thus resulting in an incomplete effort. “Playing the way we did in the second half and not muster up that energy in the first half, or really the second quarter, is a little frustrating,” Udoka continued.

A “little” is perhaps the understatement of the century, should you ask a fan’s opinion, or even a player’s. What not being able to conjure energy for a full game represents is a failure of identity, or at least an identity crisis. The Celtics may very well be going through one of those, one where they aren’t sure what team they are going to be when they line up for the tip.

“It’s frustrating but I think we should know how we are going to come out,” Jayson Tatum said. “I think sometimes, we dig ourselves in a hole and then, as you can see, halfway through the third and fourth quarter, we play a lot faster, we lock in defensively, we do what we need to do. I think that’s just a product of it being too easy in the first half. I think, more often than not, trying to put that last quarter and a half, trying to stretch that for longer stretches of the game will help us and be more beneficial throughout.”

The Celtics’ stretches aren’t ever long enough. Take their 18-2 third-quarter run last night, which Udoka noted as a time where the team “played with some effort, had some pride.” He said the team discussed their poor play in the second quarter and aimed to come out with an evident mission. And for a moment, they did… the moment just wasn’t long enough.

That run got them back into the game, but it never gave them full control. Jayson Tatum was really the only one to play consistently in the quarter — he scored 12 points on five-of-eight shooting, plus he threw in five rebounds and two assists. Marcus Smart added a helpful seven points, but no other player scored more than two. Their defense kept the Celtics within striking distance throughout the second half, particularly during that third-quarter run, but at no point did their offense come to play with the same fire. At least not at the consistent clip that is required; there’s that word again.

“I don’t know, you probably don’t know, and that’s why you’re asking me and I don’t know either,” Dennis Schröder said of Boston’s inconsistent play. “We’ve got to come out and do it for 48 minutes. It can’t happen that we just do it for two or three quarters.”

If the Celtics hit, the Clippers hit back. Los Angeles laid off for a moment as Boston carved its opponent up to make it a game at the start of the second half, but the second the Celtics appeared vulnerable, the Clippers — who played this game with Paul George sidelined, mind you — took advantage. Sure, Tatum made it close again in the waning minutes of the fourth, but without anyone else to dependably carry the playmaking burden, floundering was inevitable.

“I think everybody’s just got to take pride, especially the starters who started tonight, to make sure we come out and give everything we have,” Schröder said. “We just can’t get in the hole down 20 and try to play. So, we’ve got to figure that out for sure.”

At the moment, the Celtics find themselves at a middling 13-13 through 26 games. If that feels like deja vu, it’s because it’s a repeat result. Last season’s team had similar struggles through this many games. But last season’s team was exactly that: one from a different season, with a different group, and a different coach. There isn’t one person or one thing that can dictate why this is becoming a theme, but there also isn’t just one thing contributing to what lacks. They have talent on their side, a group that is capable of fixing this. What they don’t have on their side is time.