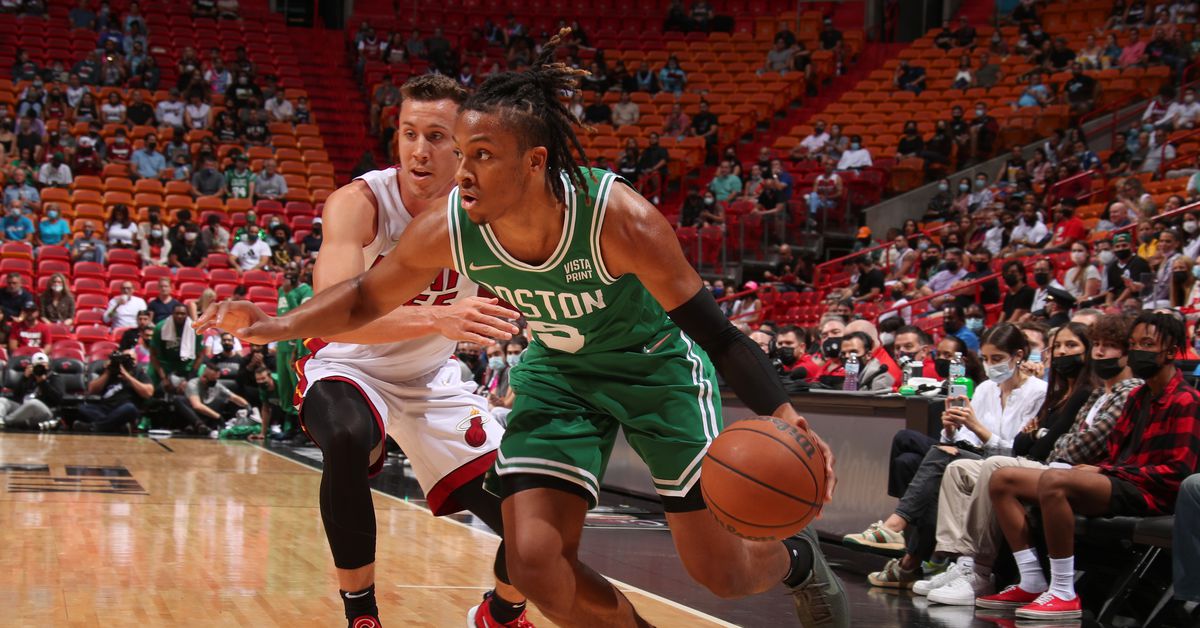 The end of the preseason is upon us, and the Boston Celtics concluded their last tune-up game with a trip to Miami to battle the Heat. While the game was tightly contested for much of the evening, the short-handed Celtics ran out of gas in the closing minutes, falling to Miami, 121-100. Jayson Tatum led the team in scoring, with 23 points on 8-of-19 shooting from the field and Romeo Langford tacked on an electric performance, with 18 on 7-of-9. But the Heat enjoyed 71 points from Jimmy Butler, Bam Adebayo and Tyler Herro and picked up the 21-point win.

The Celtics entered their final game of the postseason missing a significant portion of their regular season rotation. Jaylen Brown and Al Horford missed the contest as they remained in the NBA’s health and safety protocol, Robert Williams was a late scratch with a knee injury and Marcus Smart was suspended for missing a team flight earlier in the week. As a result, the Celtics played small, with Grant Williams checking in at center alongside Jabari Parker in the frontcourt and the team’s youngsters receiving another opportunity to shine before the games start to matter.

The result was a chippy, up-tempo effort from the Celtics to start the evening. They played fast and switched often, keeping the Miami offense out of their comfort zone, piling up steals and generally seeming to have the edge in terms of athleticism. Leading the way was an action-packed performance from Schröder, who offered highlights aplenty with a spectacular block of Kyle Lowry and a convincing Rajon Rondo impression on the other end with a ball fake into a teardrop layup.

Complementing him in the first half was a lively Romeo Langford, who hit his first four consecutive shots and entered the halftime break with nine points, while Tatum added 10 of his own on a tough night from the field (3-of-10 in the first half). Boston’s defense continued to turn Miami over — they recorded 8 steals in the half — but the Heat reclaimed the lead late in the first half as Boston’s momentum slowed. The teams hit halftime with Miami hanging onto a 59-54 lead.

If you weren’t already aware, you wouldn’t have thought this was a preseason game, at least not through three quarters. This was a physical, competitive game between two talented teams giving a lot of effort. The Celtics and Heat traded buckets for much of the third quarter, with Tatum finding his shooting stroke in a duel against Miami’s Butler, Adebayo and Herro. A big corner three from Max Strus gave the Heat a six-point lead entering the final quarter, 87-81.

The Heat threatened to build their lead further at the start of the fourth quarter, but Langford’s continued hot streak averted a potential Miami run. He hit a corner three (his fourth in five attempts) and Richardson nailed a midrange jumper to cut Miami’s lead back down to four. Instead of fully warding off the run, however, they merely delayed it. After a stretch of Boston misses, Caleb Martin connected on a three to give Miami their first double-digit lead of the night, and the Celtics never quite challenged again before their rotation players finally hit the bench.

And with that, the Boston Celtics have concluded their postseason. From here on out, the games count, and they’ll kick off their 2021-22 campaign in New York this coming Wednesday for a 7:30 EST matchup against the Knicks on ESPN.