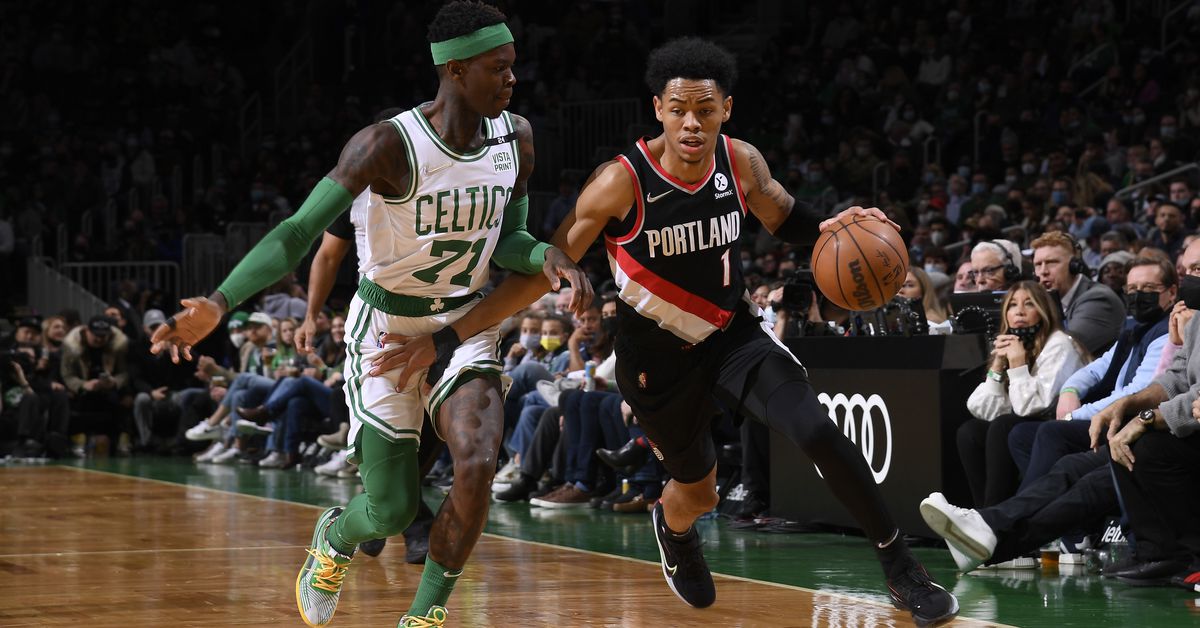 Another day, another disappointing fourth quarter. Boston failed to close out the game, and lost by five points to Portland.

When Celtics and Blazers met on December 4th, Boston had its best offensive performance of the season, scoring 145 points on 57 percent shooting. Portland was without superstar point guard Damian Lillard, and tonight marked his 10th straight missed game as he recovers from an abdominal injury.

The Blazers surprisingly went 5-4 in their last nine games without Lillard because 22-year-old Anfernee Simons has been playing like Allen Iverson crossed with Steph Curry. Over the past eight games, he’s averaging 26.3 points and 7.9 assists in 37 minutes, shooting 42.7 percent from three on 11 attempts. Early in the game, he hit a contested three against Jaylen then drilled an 18-foot step-back over Horford.

CJ McCollum – in his third game back after missing six weeks with a collapsed lung – hit two early threes, and the sharpshooting Ben McLemore added two threes of his own. Portland shot 75 percent from the field in the first quarter. They proceeded to open the second quarter on a 10-0 run. Their zone defense stifled Boston. That’s right, folks – in case you didn’t know, this team struggles against a zone.

But the Celtics clawed their way back and played outstanding basketball over the last eight minutes of the first half. After Tatum turned on the jets and finished an and-1 transition layup, he had thunderous offensive rebound dunk the next possession. Although Grant Williams got burned by Simons while defending him on a switch, he responded on the other end, hitting an impressive side-step 25-footer to cut the Blazers lead to three. Boston went on a 22-5 run after trailing by 13 with 8:26 to play.

The TD Garden crowd erupted after Rob Williams – back after a two game absence – had this offensive rebound put back.

Tatum and Grant played the entire second quarter and turned the game around with their infectious energy. Jaylen nailed a three just before halftime, and the Celtics led 58-54. An interesting stat: the Jays each had four first half assists, but that probably won’t shut up the “they don’t make their teammates better” crowd (which unfortunately got a new member today with Celtics legend Robert Parish).

The teams played evenly to start the second half. You’ll never guess what happened next: Portland went to a zone defense, Boston couldn’t break it, and Portland took a three-point lead at the 4:59 mark. Boston sorely missed Marcus Smart, as Simons was unstoppable, hitting contested shots and blowing by the defense at will.

Grant Williams assisted on two straight Celtics buckets. The first was a fast-break lob to Jaylen, and the next was a drive-and-dish to Schroder from beyond the arc. Tatum completed an old fashioned three point play on Boston’s final third quarter possession, and they trailed 83-82 going into the fourth quarter.

Romeo hit a corner three against Portland’s zone to open the fourth quarter. At that point in the game, he was an incredible +22 in 12 minutes of action. Tatum then hit two free throws, Horford blocked McCollum’s shot on the other end, and Pritchard drilled a three, giving the Celtics a 90-83 lead.

Jusuf Nurkic hit a stupid 28-footer to beat the shot clock with just over nine minutes remaining. On the next possession, as Jayson Tatum tried to break the zone, he asked himself, “wherefore art thou, Romeo,” then Langford received the pass and nailed another corner three. Celtics went ahead 100-89 following a three from Pritchard and a layup from Grant. Little did we know, that would be Boston’s final field goal.

We know these Celtics love making things interesting in the fourth quarter. They can’t help themselves. Portland went on an 11-0 run amidst a six minute Celtics scoring drought. It was broken after Jaylen hit two free throws with 41 seconds to play. Portland responded as McCollum found Robert Covington in the corner for an open three.

Boston called timeout after Portland went ahead 103-102. Tatum drew a quick foul and hit two free throws to put Boston up one. The Celtics got the initial defensive stop, but Nurkic snatched the offensive board and hit a 5-foot push shot. On the ensuing possession, Tatum missed a step back three. The Blazers made their free throws, and won the game, 109-105.

Jusuf Nurkic had a huge second half and finished with 29 points and 17 rebounds. McCollum added 24 and Simons 21.

This could have been a character building win punctuated by great performances by Pritchard, Grant, and Romeo. But the Celtics did what the Celtics do: relinquish double-digit fourth quarter leads. They’ll hope to get back to .500 this Sunday, as they travel to Washington to take on the Wizards in a 3:30 game.

For more postgame coverage of another Boston meltdown in the fourth quarter, tune into the Garden Report Postgame Show LIVE on CLNS Media right after the game. Join A Sherrod Blakely, Bobby Manning, Josue Pavon, Jimmy Toscano and host John Zannis for a full breakdown. Plus, the guys will discuss Jayson Tatum’s slump and Portland’s zone defense.