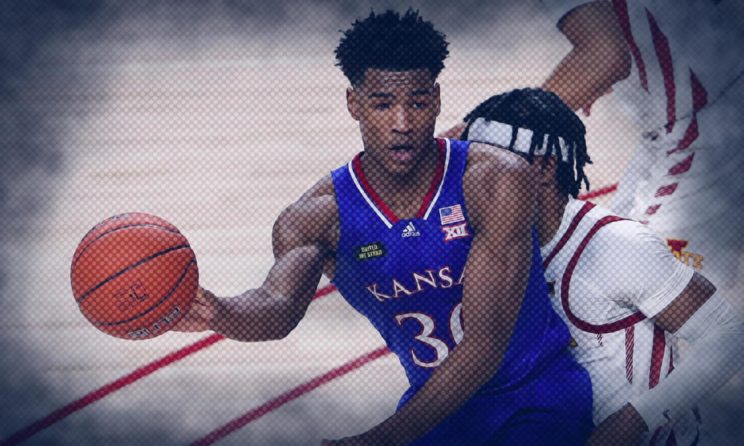 Kansas won at least a share of the Big 12 Conference 15 times under Bill Self from 2004-2019, including a stretch in which it secured 14-straight regular-season championships during a dominant run unparalleled in the modern era of men’s college basketball. Since then, it has alternated between finishing multiple games off the pace of first place and winning the league by multiple games. Our staff thinks that trend could hold steady in the 2021-22 college basketball season after finishing second in the league a year ago to Baylor by three games in the regular season.

In a 3-2 margin, our team voted Kansas as the top team in our Big 12 preseason poll, narrowly edging out Texas and first-year coach Chris Beard as he takes over after a successful stint at Texas Tech. Both teams were voted either first or second-place by our panel. Meanwhile, reigning Big 12 and national champion Baylor is a unanimous preseason No. 3 with Oklahoma State and Texas Tech rounding out the top half of our consensus ballot.

Kansas has the goods, too, because it is also represented by our preseason pick for the league’s player of the year. Arizona State transfer Remy Martin is our panel’s pick to take the award left behind by former Oklahoma State star Cade Cunningham. Martin is coming off a junior season at ASU in which he averaged 19.1 points and 3.7 assists, and he steps into a starting role on a loaded roster that returns four starters.

Below is the rest of how our team voted.

A year ago at this time, Martin was considered the frontrunner to win Pac-12 Player of the Year. Now, he’s the early favorite to win Big 12 Player of the Year. The super-senior averaged 19.1 points and 3.7 assists per game for the Sun Devils last season, and steps into a starring role in Lawrence, Kansas, with an already-established roster around him. With four returning starters by his side, his shot-making and creation ability from the lead guard spot should help catalyze this KU team that last season was in desperate need of a lead guard with his skill set.

Since becoming a head coach for the first time six seasons ago, Beard has averaged nearly 24 wins per season, won two regular-season championships, twice earned Big 12 Coach of the Year honors and, in the process, rose Texas Tech to new heights — first to a program-first Elite Eight appearance then to a national final game the following year. So, yeah, he was worth the Brinks truck Texas backed up to bring him to Austin, Texas. And even in the first year of a new venture with the Longhorns, he’s got a veteran squad loaded with transfers that looks a worthy challenger to Kansas on paper.

Baylor’s title-winning roster from a season ago is replacing four starters. So Brown, who was ranked No. 13 in the last recruiting cycle, is in a spot where he’s both talented enough to play early and where he’s likely to be called upon to contribute early. With a 6-foot-8 frame and the skill set of a slasher and connector, he should be a good fit next to established vets Matthew Mayer, Jonathan Tchamwa Tchatchoua and Adam Flagler.

Kansas is No. 1 in our Big 12 rankings and No. 3 in the AP Top 25, so I don’t have some wild misgivings about its potential this season. With most of its core returning, this team should be very good. I just need to see it in action to really believe it. The loss of Marcus Garrett is a significant one I don’t think we’re fully appreciating, and the addition of Remy Martin is one I think we may be over-appreciating. We’ll see. I still think Texas winds up as the class of the conference.

Chris Beard gets the majority of the credit for Texas Tech’s success in recent years, and rightfully so, but we should keep in mind here that the program’s best asset of late, its defense, has been credited largely to new coach Mark Adams. Now Adams takes the reins and inherits a star to build around in Terrence Shannon Jr. along with two Kevins in Obanor and McCullar. I trust this program will continue humming along at a nice pace even under a new coaching regime.