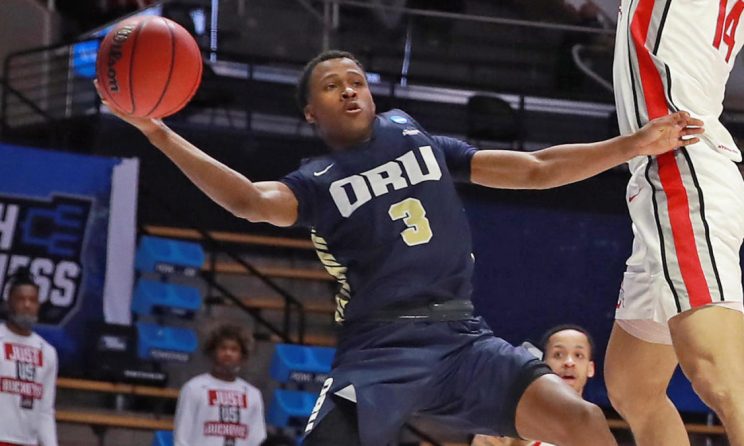 But, of course, there are very good teams housed outside those big-time leagues. So that’s what brings us here today for our final conference-adjacent preview. Time to share the sugar with many a team that will find its way into the field of 68 come March. Below you will discover a hearty list of elite mid-major players, coaches on the rise and a top 15 teams-to-know.

Although Gonzaga is a rent-paying member of the WCC, Gonzaga isn’t a mid-major program and does not recruit mid-major players. Given the Zags are the preseason No. 1 team in the AP Top 25, the CBS Sports Top 25 And 1, my 1-358 AND have the CBS Sports Preseason Player of the Year in Drew Timme, safe to say our coverage of GU is not lacking around these parts. We’ve omitted the Bulldogs from the proceedings; take it as a compliment, Gonzaga fans, because nothing about your program except for your conference affiliation is defined by the term “mid-major.”

The quick-shooting two-guard from the Summit League is a preseason CBS Sports Second Team All-America selection. Abmas guided the Eagles to their first NCAA Tournament appearance in 13 years, then pushed the No. 15 seed to the Sweet 16, giving a unique 2021 Big Dance one of its best stories. His sophomore season saw a spike — from 14.5 to 24.5 points per game — and he led the nation in scoring. How high can he go in 2021-22?

The Panthers will be part of an intriguing Horizon League, and no player will be more must-see in that conference than this potential 2022 lottery pick. At 6-foot-9, Baldwin is going to be a nightmare for opponents to face in that league. He’ll have a chance to put up the best statistical profile of any freshman in the nation. If you’re wondering why a five-star, top-10 prospect chose Milwaukee, perhaps his name rings a bell: his father is the coach.

The Cougars’ outstanding super-senior lead guard was (if you’re asking me!) ranked too low in our Top 100 And 1 player rankings (where he came in 85th). Personally, I’ve got Barcello as a top-60 guy in the country this season, registering as the best non-Gonzaga player in the WCC after he averaged a team-high 16.1 points, 4.7 rebounds and 4.3 assists a season ago. Barcello is a point guard in a shooter’s mold, as he really puts it all together for Mark Pope’s Cougars. Few players in the country are sharper when it comes to taking the right shot vs. making the right pass.

The Bulldogs have been a solid mid-major program in their recent history, averaging 22 wins across the past 12 seasons. But there’s not been an NCAA Tournament appearance in that time; the school hasn’t danced since 1991. If that is to change in 2022, it will be because of this fabulous sophomore. Lofton (12.2 ppg, 7.5 rpg, 56.7 FG%) is a vintage mid-major game-changer in that his size will wreck your scouting report. He was one of the best 20 freshmen a year ago. Do I dare say he can be a 20-and-10 guy?

College basketball is not lacking small-league ballers who can fill it up. Davis easily fits this description, and if you’re a college hoops diehard then you already know who he is. Davis (career average: 24.9 ppg) has a slight chance to set the Division I record for most consecutive games with at least 10 points (the record is 115 by La Salle’s Lionel Simmons. Davis is at 82). But let’s not pigeonhole the man into a shoot-only kind of player. He averaged a career-high 4.8 assists last season while playing for his father, Mike, who’s been at the helm of this program since 2018.

As valuable to his team as any other player you’ll see listed. Green is a high-major player who has a variety of scoring tricks in his bag — he just has to stay healthy. He lost much of last season because of a hip injury, but now he’s fully healthy and should at least keep steady with his career numbers: 17.4 ppg, 3.1 rpg, 2.6 apg, 88.5% FT and a 37.3% from 3. The Missouri Valley’s two best teams are Loyola Chicago and Drake. Its best player is Green.

My pick for 2021-22 Mountain West Player of the Year — and the highest-ranked player on my list who did not crack our Top 100 And 1 player rankings. Roddy is a do-it-all, 6-5, 250-pound forward who averaged 15.9 points, 9.4 rebounds and 2.6 assists on 59% 2-point shooting and had a 25.5 PER last season for the Rams. No one else on this list is tasked with as much as Roddy is for CSU, and even though his teammates will be even better this season, he’ll still be the Rams’ Swiss Army knife.

Behind senior Jacob Gilyard, Richmond aims to get back to the NCAAs for the first time since 2011.
USATSI

A shrewd veteran point guard and one of the best on-ball defenders in the college game, Gilyard’s steadily gotten better over the years thanks to so much playing time. The Spiders should make the 2022 NCAA Tournament because of their veteran leadership. Gilyard is the core of this, as he’s great at distributing, he doesn’t turn the ball over — and yet he is a thief. His 3.6 steals per game last season were No. 1 in the NCAA.

Bradley is only on this list because he decided to transfer. Truth be told, he’s a power-conference player. But after leaving a bad Cal team, he’s now stepping into a great spot at San Diego State. He averaged 18.0 points and 4.6 rebounds for the Golden Bears. The Aztecs need someone just like him to come in and be an alpha in order to keep SDSU in the chase to win the Mountain West.

The Bulls are fueled by the duo of Williams and Josh Mballa. Williams (17.6 ppg, 6.8 rpg) is a notch above for his reliability and both-ends-of-the-floor basketball IQ. He’s a lead-by-example guy. A get-shots-up-90-minutes-before-tip guy. Doesn’t tire, doesn’t make excuses. Williams plays a powerful style, though he stands 6-5. Doesn’t matter. He’ll overpower guys who have 3 or 4 inches on him. A joy to watch play because you get the same effort every night.

Hot coaches on the climb

Let’s highlight coaches from outside the Major Seven conferences who’ve done the most winning across the previous three years. Here are six with at least 70 victories to their name in that span.

No mid-major program has more wins since the beginning of the 2018-19 season than McKay’s (82). The ASUN again has Liberty as the preseason pick to be the top team. McKay, 56, has coached at five schools but never as long as he’s been here; this will be his ninth season leading the Flames.

This name shouldn’t surprise. The Bruins seamlessly have been able to remain among the best mid-majors in the post-Rick Byrd era, winning 81 games the past three years. Alexander will probably coach himself into an agonizing decision in 2022 or 2023, as he’s set to have Belmont be really good again, and even though the program’s going to the Missouri Valley, a bigger school is going to try to lure him away if one or two more 25-win seasons materialize.

I have a hard time selling that SDSU is a mid-major program (because, really it’s not), but in keeping with the theme of this piece, I need to include Dutcher. He’s overseen 74 victories across three seasons and done so with a significant change in his starting lineup each season. Dutcher was the coach-in-waiting for a long time behind Steve Fisher. The Aztecs’ succession plan has worked out wonderfully.

Of the six listed, here’s the only one in a new spot. Golding won 71 games the past three seasons at Abilene Christian, making the NCAAs in 2019 and 2021. UTEP smartly hired him after he led the 14th-seeded ACU squad over No. 3 Texas in the first round of the tournament. Now he’ll try to revive a mid-major with a rich history — in one of the more remote locations. Lest you forget, UTEP is on the very western edge of Texas.

Everyone knows Mark Few, Mick Cronin, Andy Enfield and the like. But who’s the mid-major coach out West that’s been quietly increasing his profile? It’s Turner, who’s won 70 games since 2018-19 and had the best program in the Big West for much of the past half-decade. The team is 43-9 vs. league opponents the past three years.

Last season gave Drake its most publicity and national relevance in a long time, but the truth is DeVries has been going strong since he got this job in 2018. The Bulldogs have 70 wins and set up as a top-two team again in the Valley this season. For more, keep on reading — I’ve got Drake as one of the top 15 mid-major teams for the season ahead.