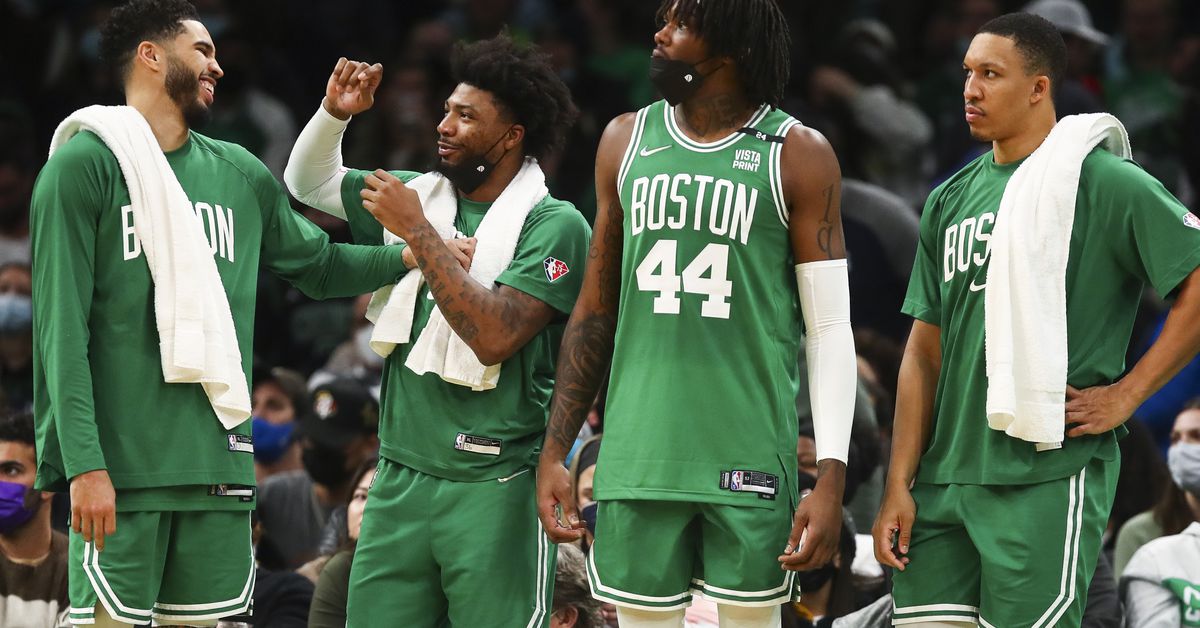 Even now, it might feel too early to say it, but here goes: are the Celtics starting to be fun again?

Believe me, I’m not one for drinking the green Kool-Aid, and this season as well as last season have been some of the most emotionally-draining basketball to watch and write about. But as of late, the Celtics have seemed to be figuring things out in real time. Whether it be Ime Udoka learning what lineups are clicking, the roster finally getting healthy, or Tatum and Brown heating up, Boston is starting to play as a cohesive unit.

A lot of the recent success has hinged on Jaylen Brown and Jayson Tatum getting more comfortable into their roles as leaders on the team. When asked about Brown and Tatum after the duo combined for 66 PTS against Sacramento, Ime Udoka said “Everybody kind of follows their lead. They’re buying in on both ends of the court. … They are the two pillars and leaders of the team.” After Sunday, both Brown and Tatum have notched 50 PT games this season, making them only the 2nd duo in Celtics history to have 50 PT performances in the same season. The other duo to commit such a feat? Larry Bird and Kevin McHale.

Regardless of what some may say, the duo of Brown and Tatum is working and both are getting their cut of scoring duties. In a particularly down shooting season for Jayson Tatum, it seems like the young star is finally breaking out of his slump and rediscovering his shooting stroke. Tatum had missed 20 straight attempts from deep before exploding against the Wizards with 51 PTS, 18-28 from the field and 9-14 from deep (a career high in threes made). He followed that up with 36 PTS on 14-23 shooting and 7-14 from deep in an absolute beatdown against the Kings.

In his postgame interview after the Kings game, Tatum said that the shooting struggles have been a “blessing in disguise” since he’s been forced to get to the rim more and finding other ways to initiate offense. Ime Udoka noted that in his practice interview on Wednesday that Tatum had notched 20 drives in their game against the Portland Trail Blazers, the 2nd most in a game during Tatum’s career. If this type of aggressive driving from Tatum becomes more frequent in his offensive game, it’s going to create a lot of openings on the perimeter for the Celtics to exploit.

Another indicator of positive changes are the adjustments and lineup tweaks being made by Udoka over the past month as he’s growing and learning as a coach. A big part of that is the team finally getting healthy, with the only players listed on the injury report being Bol Bol and PJ Dozier after being acquired from the Nuggets. Josh Richardson said it best in his postgame interview following the Kings game: “I would like to see the stats when our whole team is healthy. I think we’re taking steps.” Per NBA Stats, the starting five of Smart, Brown, Tatum, Horford, and Robert Williams has only had 174 minutes together this season. However, they have been one of the best lineups in the league (min. 150 minutes played) based on net rating (21.9) and boasting a league-best defensive rating 91.3.

When everyone is healthy, Udoka can actually start to tweak lineups and figure out what players fit best in their rotations as opposed to the “next man up” approach. He’s still learning, but some crucial adjustments are being made by Udoka that are starting to pay dividends for the Celtics. For example, Enes Freedom has barely touched the floor over the last four games, and when he has it’s either been briefly or in garbage time when the game is way out of hand. After playing 19 minutes in Boston’s loss to Charlotte, Freedom hasn’t cracked over 15 minutes in a game since; he notched 12 minutes while he played the entire 4th quarter of Boston’s 128-75 blowout over the Kings.

There’s the rotation tweak from Ime Udoka: Langford in earlier in the second half. Horford came back on for Rob. No Enes.

Udoka has instead opted to stagger Robert Williams and Al Horford, with Grant Williams put into the mix at the 4 to give Horford rest before he subs in for Rob at center. This adjustment not only relieves some of the minutes load off the 35 year old Horford, but gives Boston some spacing on the floor at the 4 and keeps their defense mobile.

We’re also seeing Udoka stagger Marcus Smart and Dennis Schroder as much as possible. Per NBA Stats, out of all Celtics lineups that have played 600 or more minutes, the two man lineup of Smart and Schroder has the worst assist ratio (16.4), the 2nd worse effective FG% (51.2 eFG%), and the 2nd worst true FG% (55.6 TS%). What Udoka is doing is trying to keep as much shooting on the floor at any given moment. As of now, the pairing of Schroder and Smart doesn’t work if you’re relegating Smart to being a shooting guard instead of a facilitator and playmaker. Udoka is doing what he can to optimize the Celtics rotations, and while he isn’t perfect, he’s a rookie coach who is gradually improving game by game.

Looking for rotation tweaks from Ime Udoka? He’s made some so far today with a full roster available.

-No Smart and Schroder minutes together

-Langford as the 9th man

Don’t take this article the wrong way, the Celtics have plenty more they can improve on and they’ve got a long way before even being considered anything more than a .500 team. There’s definitely some changes on this roster that can be made with the deadline approaching that could make the jobs of Brown, Tatum and Udoka a lot easier. But the Celtics are stringing together some solid games as they try to build consistency and cohesiveness. The team has faced a great deal of adversity, and with that adversity comes a lot of growth for players like Brown and Tatum. When they’re playing well and all of the pieces start to fall into place, there’s one word to describe the feeling of seeing them improving bit by bit: fun.