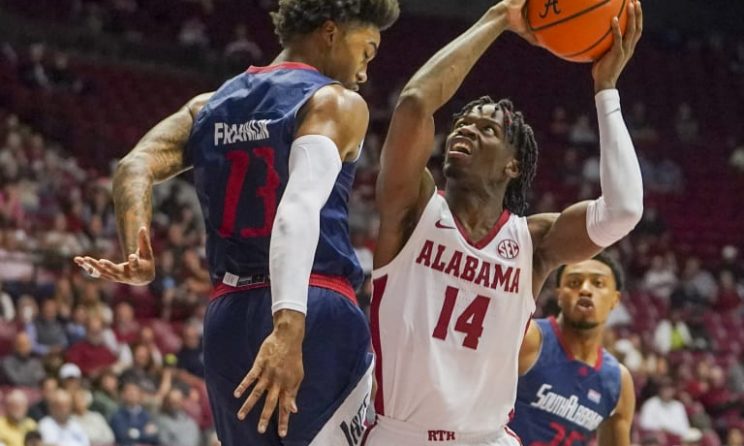 TUSCALOOSA, Ala. — There will be times later this season when No. 14 Alabama basketball will be punished for sloppy starts like this. Fortunately for the Crimson Tides, Tuesday night’s game against South Alabama proved more forgiving.

Alabama fumbled its way to 14 first-half turnovers, including nine over the first nine minutes. It lost the battle on the boards, struggled from beyond the arc and found itself trailing midway through the second half. Still, the Tide’s talented roster was able to snap out of its slump in time to secure an ugly 73-68 victory.

Alabama (3-0) was finally able to shake off its slow start in the second half as it used a 14-2 run to go up 59-51 with 8:14 remaining. The scoring spurt was spurred on by Keon Ellis and Darius Miles as the duo combined for 12 of the 14 points on the run.

South Alabama (1-2) stormed back to tie the game with roughly three minutes remaining. However, Alabama was able to hold off the visitors as JD Davison capped off an 8-2 run with a thunderous dunk to extend Alabama’s lead to 70-64 with 44 seconds remaining, ending any chance of an upset.

Alabama finished the game with a season-high 22 turnovers while South Alabama gave the ball away 21 times. Despite the Tide’s advantage in talent, it was hard to separate the two sides as South Alabama won the rebounding battle 40-39 while Alabama had a 12-10 advantage in second-chance points.

Jaden Shackelford recorded his first double-double of the season, scoring 18 points to go with 10 rebounds. The lefty was the Tide’s only consistent option from deep, hitting 4 of his 10 shots from beyond the arc while the rest of the team went 3 of 17 from 3.

Ellis continued his strong start to the season, recording 18 points and six rebounds. Miles netted 10 points on 4 of 7 shooting while leading the team with a plus-10 contribution margin. Charles Bediako won the team’s Hard Hat Award, recording 8 points and five rebounds to go with a team-high five blocks.

South Alabama was led by LSU transfer Charles Manning, who scored a game-high 23 points. Auburn transfer Javon Franklin also had a big night for the Jaguars, recording a double-double with 11 points and 11 rebounds.

Alabama will look to continue its perfect season Friday night when it hosts Oakland at 7 p.m. CT inside of Coleman Coliseum.

This story will be updated. 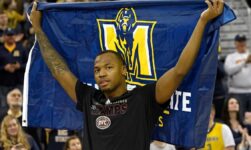