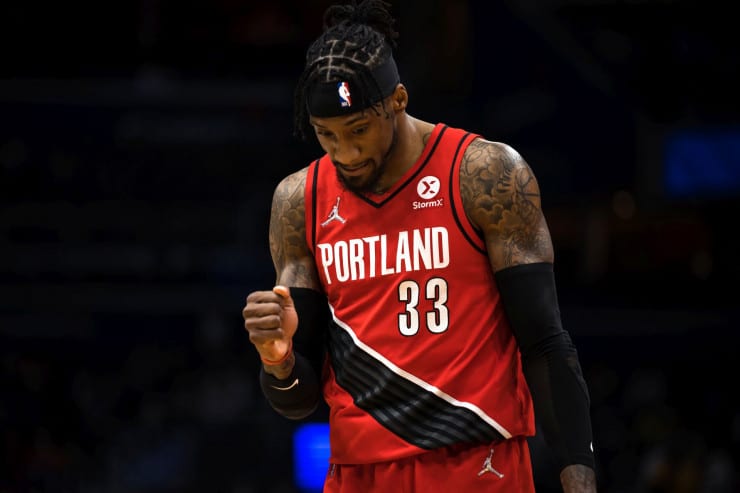 The NBA trade deadline is less than two weeks away, and while there has not been much movement as of today, that will likely change as organizations run out of time to improve their rosters.

There are a few factors that have contributed to the lack of deals, most notably the simple fact that there are not as many sellers this season. With so many teams having a legitimate shot at the postseason, they are less inclined to wave the white flag on the 2021-22 campaign.

One of the teams that have been difficult to get a read on is Portland. It has been a dismal season for the Trail Blazers even before opening night. With superstar Damian Lillard wanting to see some improvement to the roster, many questioned whether or not he would be in a Blazers uniform to start the season.

Lillard stayed loyal to the franchise but had a rough start to the year before finally opting to have abdominal surgery, which has him out until at least after the All-Star break. The team has dealt with a myriad of things, including hiring a rookie head coach, firing the GM, and leaving the fate of their future in the hands of the interim GM.

The Blazers recently began playing much better, and with CJ McCollum returning to the floor, they have somewhat turned the tide on this season. With a healthy Lillard returning in the next month or so, this team could be a legitimate playoff threat. How does that affect their current roster and what potential deals they may make before the February 10 deadline? One player that seems likely to be on the move is Robert Covington.

Known as one of those “three-and-D” players, Covington has been neither during his time in Portland. Although his previous stops went much better, the 31-year old has had a difficult time fitting in with this team. His three-point shooting has dropped off to 35 percent this season and he is shooting just 39 percent overall. He is much more effective as a help defender, not necessarily a player that can lock down his opponent 1-on-1 on the perimeter.

If Portland doesn’t plan to re-sign Covington after this season, it would make sense to move him before the deadline, especially if they can get some draft picks and young players in return. They could also finally get back under the luxury tax line, which will make ownership happy. Covington is able to get two years, $27.9 million added through extend-and-trades. Should that be the route that the Blazers take, here are a few landing spots for the veteran forward.

As great as the Bulls have been this season, they can’t seem to stay healthy for very long. Just five games into the season, they lost Patrick Williams for the year. Lonzo Ball, Alex Caruso, and Derrick Jones Jr are all still out with injuries and many other guys on the roster have missed time here and there. Through it all, Chicago is still one of the top teams in the Eastern Conference and could be a serious title contender led by DeMar DeRozan, Zach LaVine, and Nikola Vucevic.

“6-8 weeks” is the new tagline for this Bulls season. Insanely bad injury luck.

The biggest issue for the Bulls in the postseason will be matching up with the other top teams in the East. With Williams out of the picture, they don’t have anyone to guard some of the league’s most talented stars in Giannis Antetokounmpo, Kevin Durant, and LeBron James. They will likely match up with either Milwaukee or Brooklyn at some point in the playoffs, and having someone on the roster to throw at Antetokounmpo and Durant will be critical.

Someone like Jerami Grant would be an ideal fit for Chicago but nearly every team will be throwing their best offers at Detroit, and Chicago just doesn’t have the assets to compete there. If they can get someone like Covington, he may not be able to stop those guys but he can certainly slow them down. His added defense would be welcomed, and his perimeter shooting would fit right in as the Bulls are the league’s top three-point shooting team as of today.

Utah is also a top-five team in terms of three-point shooting, but their perimeter defense is clearly their biggest issue right now. They rank just 24th in steals as a team and also lack some size at the forward position. Joe Ingles is having a down year and Bojan Bogdanovic got off to a slow start as well. Despite that, the Jazz currently has the best offense in the league and there would be no pressure for Covington to be a major contributor in that area.

Much like Chicago, the Jazz would love to get their hands on Grant but they could also be after guys like Covington, Harrison Barnes, and Marcus Morris. Utah is trying to get over the hump and into the Western Conference Finals after getting into the second round of the playoffs in three of the past five seasons. With Donovan Mitchell and Rudy Gobert anchoring this team, they need to find some solid role players to be able to contend with the Warriors and Suns.

An “East scout” saying the Utah Jazz are a first-round playoff exit away from Donovan Mitchell demanding a trade to New York sounds an awful lot like idle speculation with zero substantive information behind it to me. But what do I know?

In terms of trade assets, Utah is limited to trading a conditional first-round pick in 2026 and their 2028 first-round selection. The team could use Ingles and Jordan Clarkson in a potential deal but that might not be enough to entice Portland. If the Jazz can find a way to add Covington to their roster, it would greatly help them in the areas where they struggle and could get them back into the Western Conference Finals for the first time since the 2006-07 season.

While his individual defense is not elite, Covington did make First Team All-Defense during the 2017-18 season in Philadelphia. That being said, he can still provide his former team with exactly what they need, which is defensive help on the perimeter. He is more efficient as a shooter when he is off the ball in space, and with Joel Embiid attracting double teams inside, he would have plenty of opportunities to knock those shots down.

The 76ers rank ninth in steals as a team this season, an area where Covington would help anymore with his 1.5 per game. Philly is tenth in defensive rating and 12th in three-point percentage. Covington is making $12.9 million on an expiring contract and could be a nice piece for a team that doesn’t seem likely to pull the trigger on any deal for Ben Simmons. Embiid is having an MVP-caliber season and the team can’t afford to sit back and watch a prime year of his career be wasted. They need to make some minor tweaks, and bringing Covington back could be equally beneficial for both parties.