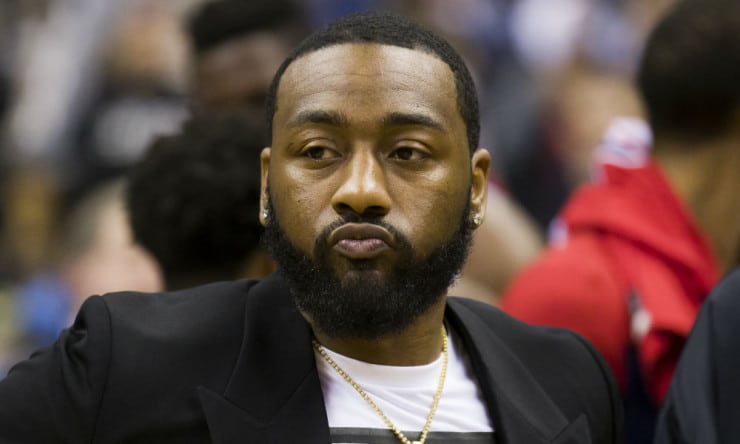 Besides the Ben Simmons fiasco in Philly, there isn’t a situation that NBA spheres want resolved more than the standoff between John Wall and Houston. It was clear from almost the very get-go that this marriage was doomed from the start. On a rebuilding team like Houston, there really is no place on the team for a 31-year-old, five-time all-star. The catch-22 is that no one’s lining up to sacrifice their long-term flexibility for someone who’s being paid $40+ million for multiple years. Especially when trading for that contract comes with a 15 percent trade kicker.

The one saving grace now is, that contract only lasts for a season and a half more before it expires. It’s still certainly a tough deal to swallow, but at least it’s a little more palatable now than it was back when Houston first acquired Wall in 2020. The odds of Wall ever being traded while still under that max contract are still pretty slim, but there are teams out there that could conceivably convince themselves that Wall is worth taking a flyer on albeit for different reasons.

The Knickerbockers haven’t exactly fared well since their surprise run last season. They haven’t necessarily been bad as a whole, but they expected better of themselves after what they had added coming into the season. The results are nonetheless a step-up from where they’ve usually been in the last two decades.

However, going from being a lottery team to a possible play-in team sounds far from encouraging as far as long-term prospects go. Being in no man’s land is still as unpreferable as it always has been and will be. So why would acquiring Wall help them? Because his deal potentially gets them out of it.

With longer deals like Evan Fournier and Alec Burks to dangle – whose contracts are much more tradeable than Wall’s – among others, the Knicks could get rid of long-term money to open up cap room in 2023. With RJ Barrett’s and newly acquired Cam Reddish’s potential extensions looming, that could come quite in handy by saving on luxury tax. If Zion Williamson accepts his qualifying offer like many believe he will next summer, such a cap clearing move would help the Knicks’ potential pursuit of him too.

For the record, the Knicks have done something like this before. Back in mid-season 2010, they traded for the previously iconic Tracy McGrady. T-Mac, in spite of being only 30 years old at the time, was nowhere close to the superstar he once was. Luckily his steep decline meant next to nothing to the Knicks. They traded for him because his contract was about to expire.

His contract coming off their books that very summer opened up cap space to bring in superstar free agents, like LeBron James. Granted, they came up short (and splurged on that ill-fated Amar’e Stoudemire contract), but that cap-saving trade threw their hat in the ring. Even though it didn’t work out, it was a brilliant move to give themselves that chance.

Fast forward to now. Getting a huge deal with Wall’s off your books instead of waiting an extra year for deals like Fournier’s and Burks’ would potentially give New York the flexibility to add Zion. In New York’s case, it’s better to have that one shot to be great, no matter how stacked the odds are against you, than to stay mediocre like the Knicks are now.

Psst – It’s also for that same reason that they should consider a Russell Westbrook trade. Just sayin’.

The idea of John Wall would be perfect for the Clippers. Kawhi Leonard and Paul George have made it work well enough to get the Clippers further than they’ve ever been as a franchise. But, anyone who’s paid close attention could see that something has always felt missing. What everyone always pinpoints it to is that they haven’t had that reliable playmaker to strike a balance between the two of them. They’ve tried their hand at improving their point guard position – extending Reggie Jackson and trading for Eric Bledsoe – but those two haven’t shown enough to instill confidence that they’re enough for a title run.

If the Clippers believed that, even with all the injuries/setbacks Wall has suffered, he was still a major difference-maker, he would provide the elite playmaking they’ve sufficiently lacked. Wall has proven to be a premier floor general when he’s at the top of his game, so if that player still remains mostly intact, that’d serve a team like the Clippers well. Having that elite playmaker could take such a burden off of their dynamic duo’s shoulders. In turn, the dynamic duo would take the scoring load off that Wall has previously been accustomed to. Sadly, this is all only in the hypothetical. Considering the window they have, the trade for John Wall hypothesis just might be worth testing.

Contract-wise, a trade would require Bledsoe, Luke Kennard, and one of Serge Ibaka or Reggie Jackson to match Wall’s mammoth deal. That is far from a King’s Ransom, but they’d be giving up several rotation players for someone who hasn’t been a pivotal player for a good basketball team since 2017. The risk isn’t too minimal, but the reward is very much unknown.

Again, John Wall’s current capabilities basketball-wise remain firmly in the abstract until he takes the court again. Wall definitely showed last year that he has some good basketball left in him, but, knowing the transition Houston was going through, you have to take his performance with a grain of salt the size of Texas.

This would also all depend on the Clippers’ health situation. It was awesome to hear that Kawhi Leonard may very well return before the season ends. Given that the West has been uncharacteristically much weaker than in years past, the Clippers would be quite the Cinderella story if a fully healthy Kawhi came back in time for when they need him the most. Unfortunately, that excitement got leveled out when there was speculation that Paul George’s recent elbow injury may prematurely end his season.

So, if the Clippers know they’ll be healthy when the postseason comes around, taking that chance on Wall just might be what they’ve needed. Kawhi has to remember that he had future Hall of Famers Tony Parker and Kyle Lowry running the point when he won his two titles. Even if Wall is damaged goods, he’s much closer to those two than Bledsoe or Jackson are.

This has been thrown around a bit in NBA chats for good reason in recent weeks. It’s no secret that the Lakers’ season has not gone nearly as well as hoped. Russell Westbrook has become the scapegoat for their struggles overall because his warts on the court stand out now more than ever. While he’s far from blameless, he’s more of a symptom of their issues. Even worse, it’s hard not to point them out because they are as easy as ever to spot.

At 23-23 and having the third-toughest remaining schedule from here on out, the Lakers are running out of time to turn their fortunes around. The more they stay mediocre, the more desperate they become. So, with Westbrook’s gargantuan contract on their payroll, and the limited assets they have left, it was only a matter of time before Wall’s name came up.

Forget the situational irony of seeing the two most untradeable contracts be traded for each other a second time. This all really starts with the elephant in the room. Let’s face it. Russ not fitting in with LeBron James and the Lakers is something that even the blind could see coming. No matter what you think of the results, it was worth a shot. Since that shot missed and missed badly, Wall is, at the very least, an intriguing (and realistic) option. Trading for Wall wouldn’t be the preferred outcome for the Lakers, but given where they’re at now, it would suffice as a defensible hail mary.

Again, no one knows for sure what Wall has left, but it wouldn’t be hard to hypothesize the benefits Wall could bring compared to Westbrook should the former resemble most of the player he previously was. The difference between him and Russ is that Wall would (on paper) not overstep his bounds. Above all else, in spite of his reputation for being one of the league’s fastest players, Wall does not play out of control and he doesn’t take shots out of his comfort zone. That would be a nice change of pace from the overzealous Westbrook.

He wouldn’t be the Lakers’ point guard of their dreams, but he would potentially be an “upgrade.” Based on his career shooting numbers, Wall isn’t that much better than Westbrook, but his shot selection is infinitely more digestible than Westbrook’s. In other words, you’ll never hear anyone say “Why on earth did Wall shoot that?!” On the other end, there was a point in time when Wall was an elite defender – 2nd-team All-Defense 2015 – so maybe he can return to that player with a lesser load offensively.

Acquiring Wall is not a foolproof plan for the Lakers, but it at least throws in a dash of hope to what has been a downright miserably mediocre manifestation by the letdown Lakeshow. This wouldn’t be the worst trade for the Lakers as long as the following were to occur:
-Acquiring Wall doesn’t come with any sort of catch.
-LA’s front office believes this is as good as it gets with Westbrook.
-If Wall can still produce at a level close to the one he was at before the world collapsed beneath him.

In all likelihood, unless he relents on his steadfast refusal to take a buyout, Wall will remain a Rocket until the last dime of his max deal is paid. But, we’ve seen teams demonstrate their desperation when they’re out of options. In times like those, nothing can be ruled out. In all honesty, what everyone wants is to see Wall playing basketball again.

So, let’s see a John Wall trade sooner rather than later.