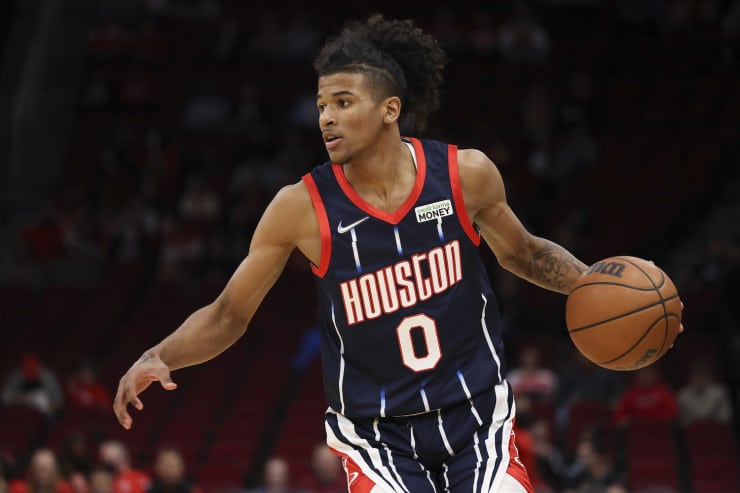 It is a packed February for NBA fans. Right now, the focus is on the trade market, as the NBA Trade Deadline is on Thursday, February 10th. After that, the focus will shift to the 2022 NBA All-Star Weekend, which will run from February 18th to the 20th. There’s no doubt that the main event of the weekend is the NBA Slam Dunk Contest. The 2022 NBA Slam Dunk Contest participants have recently been announced, and BetOnline Sportsbook has odds for the event.

We have four participants in the 2022 NBA Slam Dunk Contest this season. Houston Rockets rookie Jalen Green highlights the bunch, and for good reason. He has been a highlight reel all season long, giving fans at least one reason to watch Houston basketball. New York Knicks’ second-year player Obi Toppin is back in the contest after losing in the final round last season. Golden State Warriors forward Juan Toscano-Anderson and Orlando Magic guard Cole Anthony will both be making their dunk contest debuts as well.

While this isn’t the star-studded NBA Slam Dunk Contest fans have been demanding for well over a decade, this young group could surprise some people.

Last season, the aforementioned Toppin took on Anfernee Simons in the final round of the 2021 NBA Slam Dunk Contest. Cassius Stanley was eliminated prior to that.

So, Simons took home the award, and you may have noticed he was not on the list above. He will not be defending his title this year, so Toppin will be the only returner from last year’s contest.

Despite Toppin being the only player with NBA Slam Dunk Contest experience, he is not the betting odds favorite to win the contest. Instead, that luxury goes to the rookie, Jalen Green. Of course, it’s tough to argue. Just take a look at how quickly the Rocket can take off.

Ridiculous dunk by a cutting Jalen Green. The guy does not need much room to takeoff.
pic.twitter.com/YC9tiogSNr

Green has +175 odds to win the 2022 NBA Slam Dunk Contest, according to BetOnline Sportsbook. Toppin’s odds come in at +225 to win it all. Here’s how the odds look for the full group.

One bookie who you should take advantage of for the 2022 NBA All-Star Weekend is BetOnline. New users will be given a risk-free bet up to $50 when placed on their smartphone or tablet. If your bet wins, congrats you are already scoring a profit from mobile betting. If your bet loses, they’ll reimburse your bet with up to a $50 free play.

With these great 2022 NBA Slam Dunk Contest odds, it’s worth using your free bet on one of these players.

New members only. $55 min deposit. Receive a risk-free bet up to $50 on their first-ever mobile bet, meaning it was placed on a smartphone or tablet.  Please see BetOnline’s General Rules for additional terms and conditions regarding bonuses. Bet Responsibly. BeGambleAware.org. 18+.