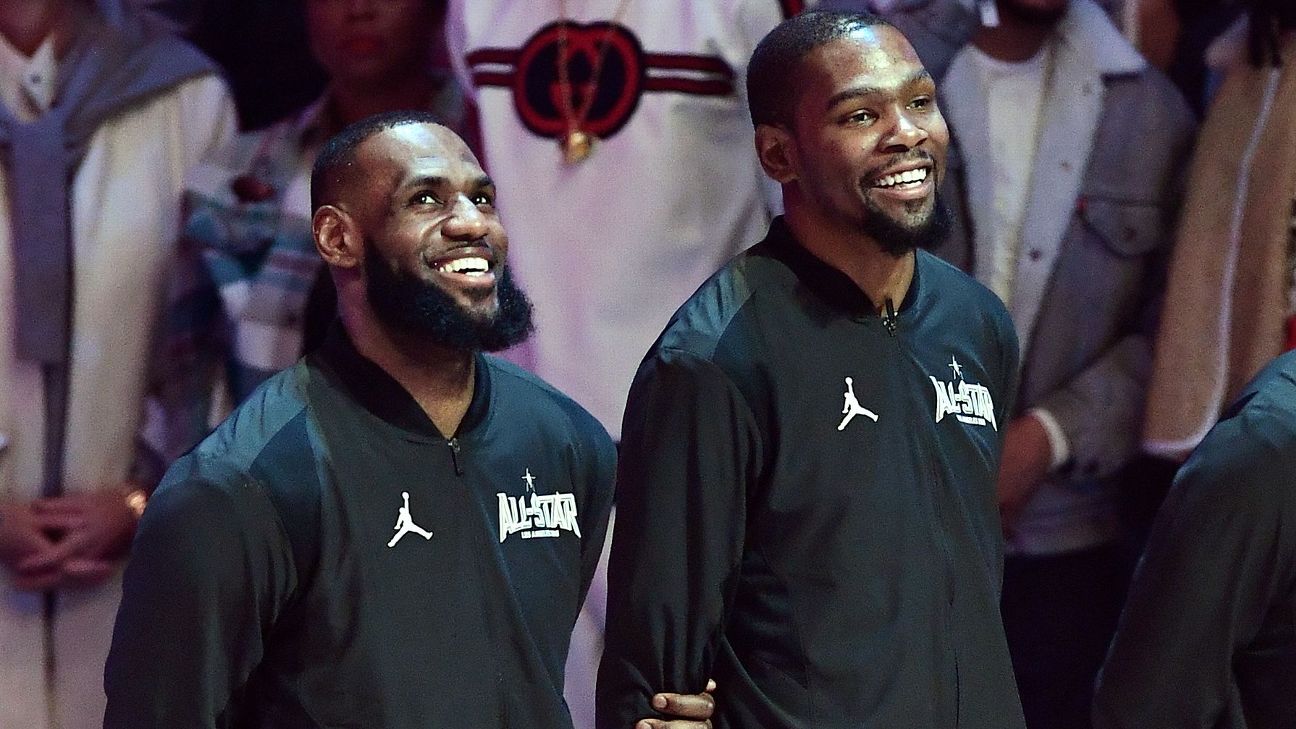 The NBA season is coming towards the closing stages and the NBA playoffs will soon be upon us. As ever, we look to have a handful of teams who have a genuine shot at winning the championship. Will one of these teams come good and bring the trophy home, or will we see one of the bigger priced teams cause an upset and lift the trophy?

For many years, the NBA has attracted fans to bet on the league. Some people bet individually on each game they watch, others place long term wagers on who will win the championship, there are many options for betting. Those looking to learn more how to make betting can find a wealth of knowledge and reading online to help out with that, especially if you are looking to get involved with the current NBA season.

Here is a look at the top teams as we head towards the end of the NBA season, one of these 10 teams will likely have their name on the trophy when we reach the summer.

James Harden, Kevin Durrant and Kyrie Irving are known as the big three in Brooklyn and because of these three players, they are the favourites to win the NBA title. We’ve not seen too much on the court from them so far, but if they can get healthy and playing together, this is a formidable force and one that will take a lot of stopping.

Injuries are always a concern for any team in the league, but even if Brooklyn has two of the three available, this is still a team that should be able to go deep into the NBA playoffs this season.

The Lakers have found their feet without LeBron and Anthony Davis on the court, which has been a pleasant surprise for their fans. Assuming those two are back in May, get ready for this team to take off and really challenge for the NBA title.

The supporting cast has stepped forward and delivered in the absence of two stars, but they need to keep that going when they come back if this team is to win. Reverting to being supporting players may not be enough to see them over the line.

It’s fair to say that the Clippers would be nowhere near where they are now without Kawhi Leonard. He is supposed to work in tandem with Paul George, though George has had injury concerns to deal with, much of his workload has been added to the already large workload of Leonard.

The biggest question for the Clippers is simply how long can Leonard keep going like this? He’s playing huge minutes, leading the team and that will eventually wear him down. The longer he goes, the more chance the Clippers have of winning anything.

The Jazz plays a very fast and expansive style of basketball, one that has served them well so far in the regular season. They’ve exploded at times, winning multiple games by double-figure margins to impress us all.

However, when we get into the playoffs, games slow down and tactics become even more important, as well as being fine-tuned. Can their style still work when that happens? That is the big question hanging over them.

For the past two seasons, we have been disappointed by the Bucks in the postseason, and they could well do that again to us. On their day, this team is electric, but again they have an outstanding record against the lower teams in the NBA this season and struggle when playing teams with a winning record.

Until that changes and the culture in this team shifts, they are going to struggle in the playoffs.

The 76ers when healthy have two very important components to making a playoff run. They have a legitimate claim to be one of the best defensive teams in the league, if not the best. They also have a ton of veteran leadership.

Put those two together and that alone will take this team into the playoffs where some others couldn’t go, add in some scoring and they could be dark horses.

The Suns are a young team that has been thriving in the regular season, showing us that they are good enough to match up against most in the league. The question comes when they hit the playoffs, can they continue this and step up another gear as those around them are likely to do the same.

The simple answer is that we don’t know, and it is going to be exciting watching to find out.

The reason Denver are not amongst the favourites for the NBA title is because of the injury to Jamal Murray. Put him on the court with Nikola Jokic and the Nuggets can beat anyone on their day, as we saw in the playoffs last season.

The Murray injury has taken away a lot from this team, but with Jokic on the team and likely heading towards being the league MVP, they may go further than we think.

The Heat, in a similar fashion to the Bucks, really struggle when they come up against the better teams in this league. They seem to find a push but then struggle to follow it up when the going gets tough.

With every team in the playoffs classed as a good team and one that wins, you have to wonder how the Heat are going to cope in there against the bigger teams.

Jayson Tatum continues to be a ray of shining light for the Boston Celtics to work around but a lack of consistency and a lack of leadership on the team is preventing them from really making strides.

Until these two issues are addressed properly, it will be a while before we are seeing the Celtics contend again.