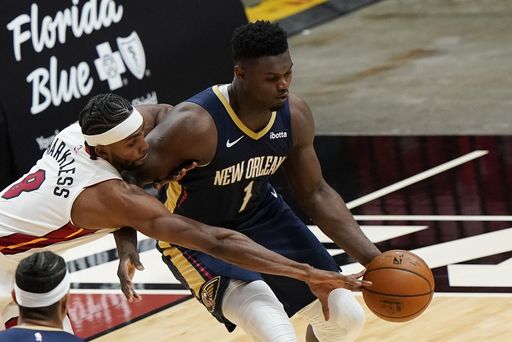 Zion Williamson got to work for his new coach. Chris Paul got started with a new set of teammates.

And on Tuesday, James Harden is expected to do what feels like a little of both.

With a preseason that’s shorter than usual before the NBA season opens on Dec. 22, teams don’t have much time to ready themselves gradually. Some teams are playing just two exhibition games before things count.

That’s probably why Williamson was still on the floor attacking the basket in the fourth quarter in Miami. New Orleans led the Heat comfortably in its debut under Stan Van Gundy, but the veteran coach had his young starters on the floor for more than 30 minutes.

Williamson, whose rookie season got off to a late start because of a knee injury, finished with 26 points and 11 rebounds. Brandon Ingram, last season’s Most Improved Player, had 22 points, six rebounds and six assists.

Paul sat out Phoenix’s preseason opener but was in the starting lineup for its game at Utah. The veteran point guard is yet another reason for optimism around the Suns after they went undefeated in the Walt Disney World bubble.

There were six games on the schedule Monday, though the biggest news might have been at a practice. Harden took the floor for the Rockets after joining the team late amid reports he wants to be traded.

Coach Stephen Silas said Harden is expected to play Tuesday against San Antonio. The NBA’s leading scorer hasn’t spoken to reporters yet, so there is curiosity all around the league about whether he wants out of a Houston organization that has a new coach and a new backcourt mate for him after swapping Russell Westbrook for John Wall among its numerous changes.

”That part of our business is going to be what it is. There’s no control that we have as players to at least manage what’s being said in terms of rumor mills and what’s being reported. So let’s just leave it at that,” said Kyrie Irving of Brooklyn, one of the teams linked to Harden if there is a trade.

”James is a great player and we wish him well. And I just want him to be happy, be secure in who he is as a man first and then as a basketball player. Whatever happens between those conversations are between them.”

Lonzo Ball had 12 points and six assists for the Pelicans at Miami, where they will play on Christmas Day. Josh Hart added 11 points.

The Heat rested Jimmy Butler in their first game since losing to the Lakers in the NBA Finals. Tyler Herro scored 17 points for Miami, and Duncan Robinson added 14.

Bam Adebayo finished with nine points and eight assists for the Heat.

At Charlotte, Fred VanVleet scored 23 points as Toronto completed its two-game sweep of the Hornets.

Terry Rozier scored 15 points for the Hornets, and Gordon Hayward had 14.

Rookie LaMelo Ball, the No. 3 pick in the draft, had 12 points and two assists in a reserve role. He had been scoreless on 0-for-5 shooting in Toronto’s victory on Saturday.

At Cleveland, Dante Exum scored 23 points as the Cavaliers improved their preseason record to 2-0.

Domantas Sabonis had 18 points and nine rebounds for the Pacers (0-2). Aaron Holiday added 16 points but Victor Oladipo had only nine on 2-for-11 shooting.