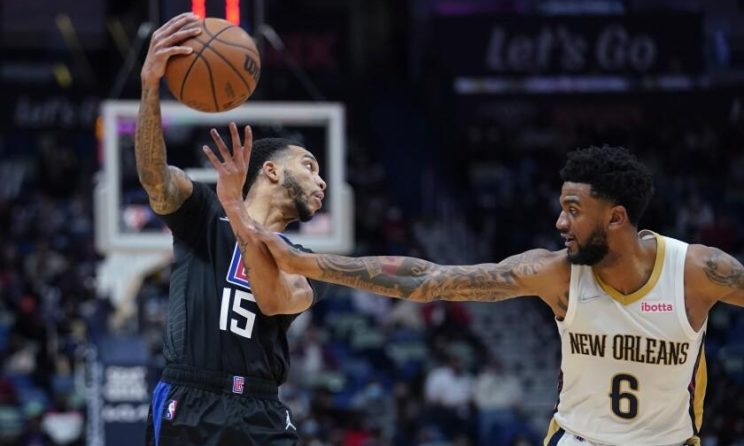 A few days after the Clippers’ season ended last month, Xavier Moon was preparing for a flight home to Alabama. Between gathering his things and the quick turnaround, he didn’t have much time to process the previous nine months.

There would be plenty to unpack later.

During a season when the Clippers’ rotations at times looked like a revolving door because of numerous absences related either to injuries or COVID, Moon became the most familiar of the new faces.

Initially signed to play in Italy this season, Moon bought out his contract last summer after receiving interest from G League teams, and the point guard landed on the Clippers’ affiliate in Ontario before roster attrition with the Clippers led him to make his NBA debut on Dec. 27, six days before his 27th birthday. He played out three 10-day contracts and in March signed a two-way contract that expires after this season.

Moon’s first, partial NBA season ended with 10 appearances, 137 minutes, 58 points, a four-to-one assist-to-turnover ratio and a front seat to January’s 25-point comeback against Denver and 24-point comeback in Philadelphia. He grew close with point guard Reggie Jackson, who called Moon a “Clipper for real,” and credited Moon with helping keep him energized during the winter at a time when the Clippers’ depth was at its thinnest.

In an interview with The Times, Moon expressed confidence that he will play in the Las Vegas Summer League in July, though he was unclear whether it would be with the Clippers.

Moon’s ultimate goal, which he expressed at times throughout his first taste of the NBA, has always been clear — to make a 15-man NBA roster.

This interview has been condensed and edited for clarity.

Would playing again in Canada’s Elite Basketball League this summer be something you at all would do? [Moon is a three-time CEBL most valuable player and won two league championships.] Or if you are trying to get into a training camp, is that something you don’t want to do?

I’m not going back this year. They obviously know what I’m trying to do here, what I’ve done here. So this is my main focus right now. So I’m going to take the summer to really focus on myself, but obviously I’ll be keeping a watch on it, seeing what they do.

In March when you signed your two-way contract, you mentioned that it was just one goal you hope to check off, but you have others, like earning a roster spot. How do you go about using this offseason to accomplish that, beyond just playing well at summer league?

Just probably getting feedback from the coaches on the coaching staff. Before I even signed my two-way here I had a conversation with the organization from Phoenix. So they were giving me some feedback on things that they thought I could work on, things that I’ve done well, so I feel like getting feedback from coaches that have seen me play will obviously help me elevate my game. So just getting that feedback from the coaches here, and then attacking the offseason, like I always do, whether it be in the gym or on the court as you watch film, it’s pretty much going to be the same thing but a little bit more wrapped up getting closer to summer league.

You heard from the Suns’ coaching staff?

When I was in the G, I asked for some feedback because [my agent] was talking with them at the time before I signed my two-way, so they were giving me some feedback on the things that they’ve seen when I was playing with Agua Caliente.

So from what you’ve heard about yourself from around the league, what do you feel are the things you want to focus on most in the offseason?

Just my body. Improving my body, getting stronger, obviously add a little weight and that will help with every aspect of my game and other than that just being a student of the game, just learning to be an NBA point guard, facilitating and knowing when and where to score.

I spoke this season with Clippers assistant Larry Drew about playing the position of point guard at the level required in the NBA, and he mentioned how many things you have to weigh when playing that role, such as not taking yourself out of the game while getting others involved, too.

Sometimes you’re running a play for a specific player, but let’s just say the play breaks down. Now you have to figure out the next option or Option 2 or Option 3 within 24 seconds. It’s not as easy as people think it is, and being a rookie is probably like the hardest thing to do. You have to be able to read body language, you have to be able to read all of that. If somebody not touching the ball, obviously, you haven’t touched the ball in three or four plays, that next possession that you touch the ball, more than likely you’re going to shoot it because you haven’t had the ball. I think that’s like the biggest thing probably to adjust to, just learning how to read the room. I actually had a conversation with Larry Drew and he was like, “Man, you’re probably the most instinctive point guard I’ve ever seen.” I’ve been playing my whole life so it comes natural, but at the same time it’s still stuff that I have to learn as a point guard.

What were examples of what he meant by that?

Mainly when I get off the ball, coming off ball screens or making passes at the right time, knowing when and where to score, knowing time and score, a lot of that stuff matters, and I feel like that’s what he meant when he said “instinctive.” You don’t have to teach me a lot of stuff because I already know how to set guys up, I know how to set up their cuts, I know when to pass them the ball and where they want it, so I feel like that’s what he meant.

To give people a sense of what it’s like to be on the team, what’s it like to be coached by Tyronn Lue?

Gives you a different level of confidence. Obviously he played, so he’s a player’s coach, but the first conversation I had with him when he told me I was actually going to get some playing time, he called me that night and was like, “We’re going to play you tomorrow, I don’t want you to walk on eggshells. Play free, run the team.” He was like, “You know the plays, you know what to do, makes and misses we doing this, and other than that just have fun with it.” He was like, “Play how you play in the G League.” So, I think any coach that gives their players that level of confidence is easy to play for.

Players described how strong the locker room was this season, and that it was a factor in keeping the season afloat despite the injuries and absences. Who were the driving forces behind how the locker room stayed together?

It was a crazy season and even when I got there you would think that the energy would be a lot different than what it was, I just feel like it was everybody. Whether we won or lost a game obviously we knew we were down players but we approached every game the same way and most of the time it was led by the vets — Marcus [Morris], Reg, Luke [Kennard], all those guys. The locker room never changed whether we won a game or lost a game, whether we had the whole roster or we had seven or eight dudes, we always approached it the same way, and I think that gave everybody else in the locker room confidence just to know that everybody believed in each other. That was from the time I signed my first 10-day. And then obviously when Paul [George] came back that was a lot different because it was the same with him. Everybody — it’s going to be somebody’s night every other night. Just having that support from your teammates man, makes it easy to play for everybody in the locker room.

What was it like to be around Paul George and Kawhi Leonard? What did you see from either that impressed or struck you about them?

What drew you to Reggie Jackson, or you to him, because you two seemed to click.

It’s different because I can’t really pinpoint one thing that drew us to each other. I just know when I signed my first 10-day he was out with COVID and so I think it was the Toronto game where he came back and he walked in the locker room and was loud and dapping everybody up. I thought just by looking at him he was a quiet person, and when he dapped me up, we was talking and I was like, “I thought you was a quiet person.” He was like, “Nope, this me right here, all the time.” I think from that day on that’s just how we were. And me, I’ve always been high energy, playing or not. I feel like I helped him because of the energy that I had when I was playing or not and I’m always telling him like just have fun, like don’t worry about the outcome or nothing, just go out there and have fun and I think that’s where the whole little smile thing [a celebration where Moon and Jackson exaggerated a smile at each other entering timeouts] came from. Once I got those minutes in Brooklyn, that was probably the first time that we started doing that. He was like, “Hey, man, just have fun.” He was like, “Shoot your shots and the rest is history.” That’s just how we were from the time I signed in December until the last game.

You’ve played all around the world, and maybe it’s as simple as getting a roster spot in the NBA, but what do you still want to accomplish?