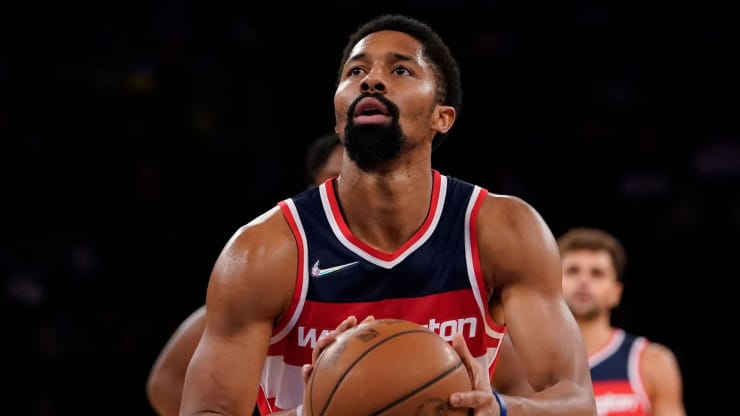 Spencer Dinwiddie spent five seasons with the Brooklyn Nets but did not exit the way that he wanted to. Tomorrow night he returns to Barclays Center as a visitor, trying to get the Washington Wizards to a 3-0 record to start the season.

The former second-round pick spent two years in Detroit before his career took off with the Nets. His scoring average increased by four points every season, reaching a career-high 20.6 mark during the 2019-20 season. Dinwiddie appeared in 274 games with the Nets before a sign-and-trade deal sent him to Washington.

Although his final season in Brooklyn lasted just three games, Dinwiddie’s time in Brooklyn was clearly coming to an end. With the Nets being deep into the luxury tax, and with Kyrie Irving and James Harden in the backcourt, keeping the former Colorado guard was never a realistic option. Instead, he arrives in the Nation’s capital to replace former MVP, Russell Westbrook.

Part of the allure of acquiring Dinwiddie was to convince Bradley Beal to stay in Washington long term. The All-Star shooting guard is eligible to sign a contract extension later this year and can become a free agent in the summer. The Wizards have completely revamped their roster, including head coach Wes Unseld Jr, who replaces Scott Brooks.

* Turned that rough Wall contract/scenario into:

The Wizards drafted Corey Kispert out of Gonzaga with the 15th pick in the draft. Washington also acquired Montrezl Harrell, Kyle Kuzma, and Kentavious Caldwell-Pope in the Westbrook trade with the Lakers. The depth of this team will only get better once Rui Hachimura and Thomas Bryant return from injury. Dinwiddie’s ability to penetrate and kick out to open shooters will provide dividends for guys like Davis Bertans and Deni Avdija.

On the flip side, Brooklyn clearly has some wrinkles to iron out after dropping their season-opener in Milwaukee. The elephant in the room is Irving, who is not playing due to his vaccination status. The team decided that he will not be a part-time player this season, and his future remains a mystery. Brooklyn has plenty of other quality guards on their roster to fill the void, but their status as the championship favorites has been put on hold until this situation is resolved.

Dinwiddie may not have the accolades or the flashy plays that Irving possesses, but his skill set and professionalism are exactly what the Nets are missing at the guard position.

In the Wizards’ season-opening win against the Raptors on Wednesday, Dinwiddie had an okay debut as he begins to shake off the rust. The 28-year old finished with 13 points on 4-10 shooting, with 4 rebounds and 4 assists. His second game went much better on Friday night against the Pacers, when he carried the load with Beal ruled out of the contest.

In Washington’s home opener on Friday Dinwiddie erupted for 34 points, 6 rebounds, and 9 assists on 13-24 shooting. He shot 6-9 from three-point range, was perfect at the free throw line, and had just one turnover in 35 minutes of action. More importantly, the Wizards got the win in overtime, and are 2-0 to start the season. Dinwiddie made several clutch shots late in the game and spoke to the Washington Post afterward about what he brings to the table.

“Look, I get it, I’m not the sexiest name, nor do I pretend to be Dame or Steph or none of those guys,” Dinwiddie said. “But those things happen; the proof is in the pudding. Like, game-winning shots, we can go on YouTube and look at mine. And if Brad’s out, I probably will be the one taking those most times. So you just understand what’s the best shot for our team, but ain’t no fear in those moments. Like, in my opinion, I’m one of if not the best in the league at it.”

It should go without saying that for Washington to be successful this season, their backcourt needs to produce at a high level. More importantly, they need to have good chemistry. That will take some time, but Beal is already high on his new running mate.

“I like his size, his athletic ability, his ability to score—which takes a lot of pressure off me in having to create new things—and his love for the game,” Beal said in an interview with NBC Sports Washington. “I’ve competed against him in Brooklyn. We always usually guard each other, so I know what he’s about. He’s about winning, he’s about competing. I know I can go to war with him.”

Spencer Dinwiddie ( @SDinwiddie_25 ) was going off scoring on all three levels 🔥 34 points 9 assists 6 rebounds less than a year off of an acl tear 🤯 pic.twitter.com/MXKnTEYiZu

Chris Paul and Devin Booker. Damian Lillard and CJ McCollum. There are a lot of great backcourt duos in the league. Beal and Dinwiddie may not be the shooters that Stephen Curry and Klay Thompson are. They might not have the highlight plays seen from Lonzo Ball and Zach LaVine. What they do have is one of the best guard combinations on the floor every night, which is more than what Brooklyn has.

After signing a four-year, $137 million contract in the summer of 2019, Irving is in his third season with the Nets. The problem is that the veteran guard has played in just 74 total games for the team. That number doesn’t appear to be increasing anytime soon.

After failing to make the postseason in two consecutive years, the Wizards returned to the playoffs last season. They were bounced by the 76ers in the first round but are a more complete team today. That doesn’t necessarily equate to another playoff appearance, as the East is absolutely loaded from top to bottom. That being said, this Wizards team is certainly capable of a return if completely healthy.

To the casual fan, the Wizards simply lost their star point guard from last season. Truth be told, Washington actually upgraded that particular position, while also improving the rest of their roster. Dinwiddie may not be a household name to some fans, but that will likely change as the season plays out.