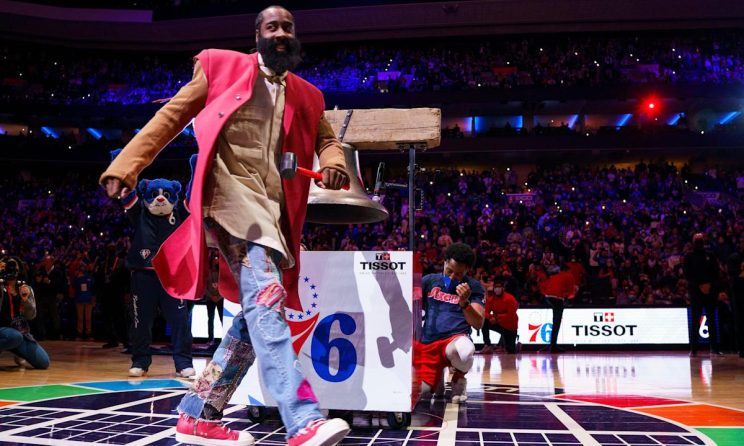 Harden has been with two more teams in the past 13 months. He went from Houston to the Brooklyn Nets, where he remained for a little over a season before being dealt to the 76ers in a blockbuster swap at last Thursday’s trade deadline.

While he said his first choice was to go to Philadelphia from Houston 13 months ago, Harden forced his way out of Houston and Brooklyn – Houston because the Rockets were rebuilding and he wouldn’t get into the specifics of why he wanted to leave Brooklyn during Tuesday’s introductory news conference at the team’s training facility.

“I mean, it wasn’t planned like this,” Harden said. “Uh, 14 months ago I didn’t see myself on three different teams. I had to go to Brooklyn. We all know that could’ve been something special – whatever reason it is for that (not happening). … The last year’s been a lot of ups and downs, a lot of stress. Whatever. That’s in the past. I’m excited, I’m happy and it’s the opportunity of a lifetime.”

Harden said he plans to pick up the $47.4 million player option for the 2022-23 season and raved about the Sixers’ coaching staff, the Philly faithful (“probably the best fans in the league”), numerous new teammates, the title chances and just about everything associated with his new organization.

Perhaps the 32-year-old Harden, a three-time scoring champion and the 2017-18 league MVP, will agree to a massive contract extension of four years and $223 million with the Sixers after picking up his option and then end up having a lengthy stay in Philadelphia.

Here are some other takeaways from the news conference:

♦ It was a collaborative decision for Harden to sit out the Sixers’ final two games before the all-star break with a strained left hamstring with the idea that he’ll be as close to 100% as possible when he plays.

Harden said the hamstring feels good and he’s been able to do a lot of running and strength work to upgrade his conditioning, which he referred to as “great.”

“But it’s nothing like basketball conditioning – playing 5-on-5, pick-and-rolls and getting hit, things like that,” he said.

♦ The Sixers are watching the buyout market to see if a center that can help them is waived by the March 1 deadline, which would make him eligible for the playoffs.

Since trading backup big man Andre Drummond to the Nets in the Ben Simmons/Harden deal, Doc Rivers has used second-year pro Paul Reed as the primary sub for star center Joel Embiid. Rookie Charles Bassey and veteran Paul Millsap, who made his Sixers debut in Tuesday’s 135-87 blowout loss to the Celtics after being included in the trade, are the other options right now. The 34-23 Sixers begin a weeklong break after visiting the Bucks on Thursday night.

Since it was a 3-for-2 swap, the Sixers have a roster spot available if they find somebody they like.

♦ President of basketball operations Daryl Morey realized that being a legitimate championship contender required having at least two great players at the top of your roster. He waited so long to deal the embattled Simmons, who first wanted to be traded in late June, because he was determined to land someone of Harden’s ilk to pair with Embiid.

“We knew from the moment Ben asked out if we were going to do a trade, it had to be for one we thought could allow us to compete at a high level,” said Morey in his first remarks to the Philadelphia media since Sept. 27.

While he’s optimistic about the Sixers’ postseason possibilities in April, May and possibly June, Morey also gets it’s all talk at this point.

“All the hard work happens from here,” he said. “We haven’t accomplished anything yet.”

♦ Rivers likes to call the NBA champions “the winner” because that’s the only team to win the final game of the playoffs.

“Being the winner is hard,” Rivers said. “And that’s what we want to become. That’s why we make trades like this. We want the opportunity to be the winner and we believe this trade does that.”

♦ Harden thinks power forward Tobias Harris should continue to be a consistent scorer even when Harden joins Joel Embiid, Maxey, Harris and Matisse Thybulle in the starting lineup. Harris is averaging 18.6 points this season.

“Tobias is a guy that can get you 20 a night,” Harden said. “I feel like it’s my job to get that out of him. He’s very versatile as well. We all know how good of a talent Tobias is.”

This article originally appeared on Bucks County Courier Times: Can James Harden make a new home in Philly and deliver an NBA title?