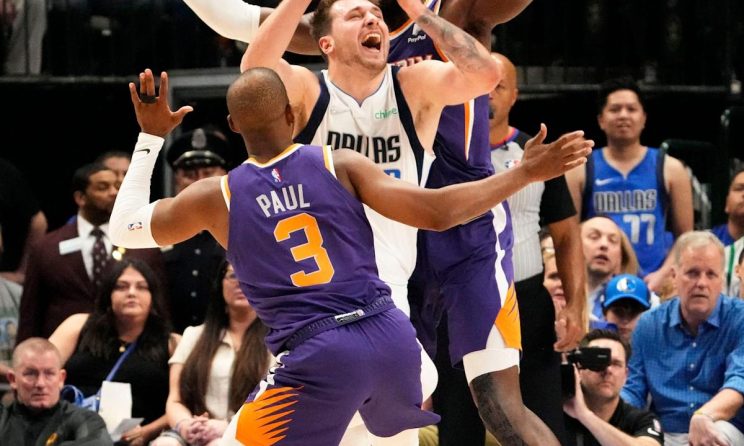 DALLAS — As usual, a member of the Suns media relations staff distributed copies of the official scorer’s report to the post-game press conference Friday night, including leaving a couple at the table in front for coach Monty Williams and players.

For them, it must have been like a teacher returning an assignment, only not with a big “F” on it, but a big “?”

As in, what was that we all just witnessed?

The 103-94 loss to Dallas in Game 3 of the Western Conference semifinals produced a lot of questions, so let’s get to them.

How does a good team look that bad?

A loss was not unexpected. Maybe the Suns were due for one. They had won four consecutive playoff games, including the first two in this series against the Mavericks. Those were in Phoenix, and the Mavericks were back home, trying to avoid a sweep in the best-of-seven series.

Losing was understandable. But not like how the Suns lost Friday. It was one of their worst performances all season.

The 94 points were a season low. They committed 17 turnovers and gave up eight offensive rebounds. Those two categories led to 38 points by the Mavericks, Williams said.

The Suns took just 76 shots and made only 44.7 percent of them. About 20 of those misses came around the basket, Williams said. It’s the first time the Suns shot under 50 percent in this postseason.

“We just couldn’t put it together tonight,” he said. “We played in sections, it felt like.”

It looked that way, too. Very small sections.

Just how bad did the offense look?

At one point, I wrote in my notes: “If Jae Crowder goes cold, where will the Suns find their offense?”

Guess we know now that Chris Paul is human, huh?

Yes, we do. His best move of the night was was arriving at the game wearing black leather pants with large pockets on the sides. Not many men can pull that off on their 37th birthday. Most of them would just be happy that cargo pants were making a comeback.

Otherwise, Paul turned in one of the worst playoff performances of his career. He committed seven turnovers, all in the first half, one shy of his career playoff high.

“If I don’t turn the ball over like that, it’s a different game.”

As they usually do, Paul’s teammates followed his lead. Devin Booker had five turnovers. Together, Booker and Paul took just 22 shots, committed 12 turnovers and scored 30 points.

Don’t we have to give the Mavs some credit?

No, but we should. Their coach, Jason Kidd, did a masterful job preparing his team for Game 3, but not necessarily by adjusting his scheme or changing his rotation of players.

After games one and two, he challenged players other than guard Luka Doncic to contribute offensively.

The Mavericks were successful in both areas. Guard Jalen Brunson, who scored 22 points in the first two games, had 28 Friday night. Forward Reggie Bullock scored 15 and Maxi Kleber came off the bench to score 14.

And Doncic participated on defense while also scoring 26 points and finishing with 13 rebounds and nine assists.

Can you say anything good about the Suns performance?

Sure, at least they played together. Everyone was bad. Well, except for Crowder. He had 19 points, seven rebounds and five assists.

How did the Suns handle playing their worst game in some time?

Everyone who met with reporters — Williams, Paul, Booker and Crowder — credited the Mavericks, who couldn’t afford to fall behind 3-0 in this series.

By “people,” we’re assuming Booker meant the NBA and its referees.

That’s a problem, because the Suns players spent far too much time complaining to the refs in Game 3. Forward Mikal Bridges and Paul were given technical fouls. Booker griped throughout the game.

The Suns’ preoccupation with the officials was a distraction, and there were already enough of those on the road against a desperate opponent.

Phoenix Suns forward Jae Crowder reacts during their loss to the Dallas Mavericks in Game 3.

Should Suns fans be worried?

After summing up the Suns problems with rebounding, offensive execution, shooting and defensive communication, Williams said: “All of those categories will be better on Sunday.”

A cynic would observe that’s not such a bold prediction because those categories couldn’t have been worse than they were in Game 3.

But the Suns bounced back from the occasional dreadful performance in the regular season, and they did it after their two losses in the first-round to the Pelicans.

In the big picture, all Friday’s loss only means the Suns are going to play some additional basketball, as Booker said, such as a Game 5 in Phoenix on Tuesday.

That’s not a terrible thing, unless they play it as poorly as they did on Friday. And that can’t possibly happen again, can it?