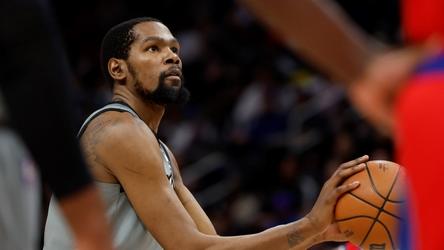 It was a special night in Detroit as the Nets not only defeated the Pistons, 116-104, but Kevin Durant dropped 51 points, the most he’s had in a Nets jersey.

But what is interesting is that the Nets needed all of Durant’s 50-point onslaught to take out a now 4-22 Pistons team. For a team with championship aspirations, games like Sunday night could have been a letdown.

Brooklyn was playing the last of their four-game road trip, just two days after a hard-fought win against the Atlanta Hawks, and James Harden was given the night off. The team could have easily allowed the Pistons to build on their 91-86 fourth-quarter lead and prepare for the trip back to New York.

But KD wouldn’t allow it. Durant had already scored 38 points when the final frame got under way, but he dropped seven more points during the Nets’ 11-0 run to start the fourth to take a lead the team wouldn’t relinquish.

“Kevin was incredible,” Nets coach Steve Nash said after the game. “Not an easy night. [Detroit] played extremely hard, tons of energy, and we were playing different lineups…. So there were challenges there for us. And for him to be able to score 51 points….unbelievable.”

When asked if he felt the need to put the offense on his back on Sunday with Harden out, the two-time MVP brushed it off.

“Nah. I felt we got enough scoring. Defensively we come out, stick to the game plan, play physical and the offense will take care of itself,” Durant explained. “We went cold there for a second so I figured I should be more aggressive.”

Durant’s scoring output was even more unbelievable when you take into account how he accrued his fifth foul with 8:46 left to play, but stayed on the floor as he and the Nets continued to expand on their lead.

”I saw the look in his eyes and knew he didn’t want to come out,” Nash said. ”He was just incredible tonight. Not only does he score 51, but he had nine assists and seven rebounds. He even had a couple blocks and played incredible defense in the fourth quarter.”

“I want to do everything, not just focus on offense,” Durant said.

That work ethic is why Durant has become one of the best players of his generation and a multi-time champion. However, while his scoring prowess may look like it comes naturally to him, there’s a lot of work that goes into it that those outside of the organization don’t see.