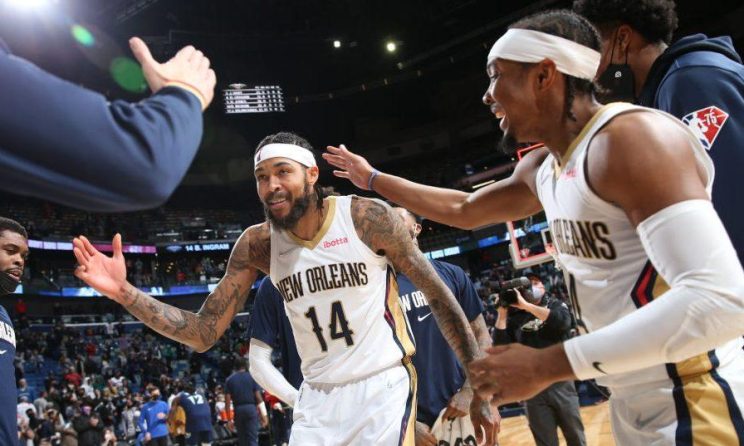 NEW ORLEANS (AP) — Brandon Ingram threw both arms above his head, extending three fingers on each hand and smiling triumphantly as his Pelicans teammates and fans celebrated wildly.

New Orleans’ leading scorer could have extended all 10 fingers had he wanted to display his point total during a sublime 1:13 span at the end of regulation.

Ingram capped a 33-point, nine-assist performance by hitting three late 3-pointers – the first while being fouled for a four-point play and the last with less than a second left – as New Orleans edged the Minnesota Timberwolves 128-125 on Tuesday night.

“I wasn’t necessarily looking to shoot the basketball every single time down the floor,” Ingram said. “But I felt good. I felt in rhythm and my teammates found me.”

Ingram went 6 for 7 from 3-point territory and his most pivotal shots came in a long-range exchange with Minnesota’s Anthony Edwards, whose fifth 3 of the game cut New Orleans’ lead to 117-115 before Ingram hit from the right wing while being fouled. After Edwards came right back with a left-wing 3, Ingram hit another from deep to make it 124-118 with 50.5 seconds left.

Malik Beasley‘s sixth 3 of the game cut it to 124-123 with 12.9 seconds left, and the Wolves fouled Devonte’ Graham, who made one of two free throws with 9.2 seconds to go. Minnesota tied it at 125 on D’Angelo Russell‘s driving scoop with 3.6 seconds left, only to see Ingram’s rainbow 3 from more than 26 feet swish through for the win.

“When he released it, I just knew it was going in,” Graham said. “I just held my hands up because I already knew it was cash.”

Josh Hart had 21 points and nine rebounds, and Jonas Valanciunas added 13 points and 12 rebounds for New Orleans, which shot 55.3% (42 of 76), including 16 of 33 (48.5%) from deep. The Pelicans made the last nine 3-pointers they attempted, starting with two by Ingram late in the third quarter, then one from Garrett Temple, two by Nickeil Alexander-Walker and one by Graham.

Hart said Ingram set the stage for his crunch-time flourish by playing unselfishly.

“During the whole game, he’s trusting us to make the right play,” Hart said. “So, it keeps the defense honest, especially at the end of games, and he’s someone who can get to his shot.”

Edwards scored 28 points and Karl-Anthony Towns had 26 for Minnesota, which saw its four-game winning streak snapped in an emotional, highlight-filled, up-tempo affair that included 19 lead changes and 14 ties.

“We acted like we were just going to walk in, get a win, and it’s going to be sweet,” Towns said. “I don’t know if we thought, like, we’re the Warriors all of a sudden.

“We tried to flip a switch, the switch wasn’t flipping, and then finally we got some shots to go in. It’s not the way to win a basketball game,” Towns added. “I felt like we played hoping they would give us the game.”

Russell finished with 18 points and 10 rebounds for the Wolves, hitting four of his first five 3s before missing his last five. Beasley added 18 points, hitting six of eight 3s.

New Orleans opened the third quarter with a 10-3 run, during which Valanciunas scored five points for the Pelicans’ largest lead at 75-62.

Minnesota chipped away and pulled back in front when Edwards’ short floater capped a 7-0 run that began with Towns’ straight-on 3, giving the T-Wolves a 112-111 lead with 3:32 left and setting up the riveting finish.

Check out more on the Pelicans