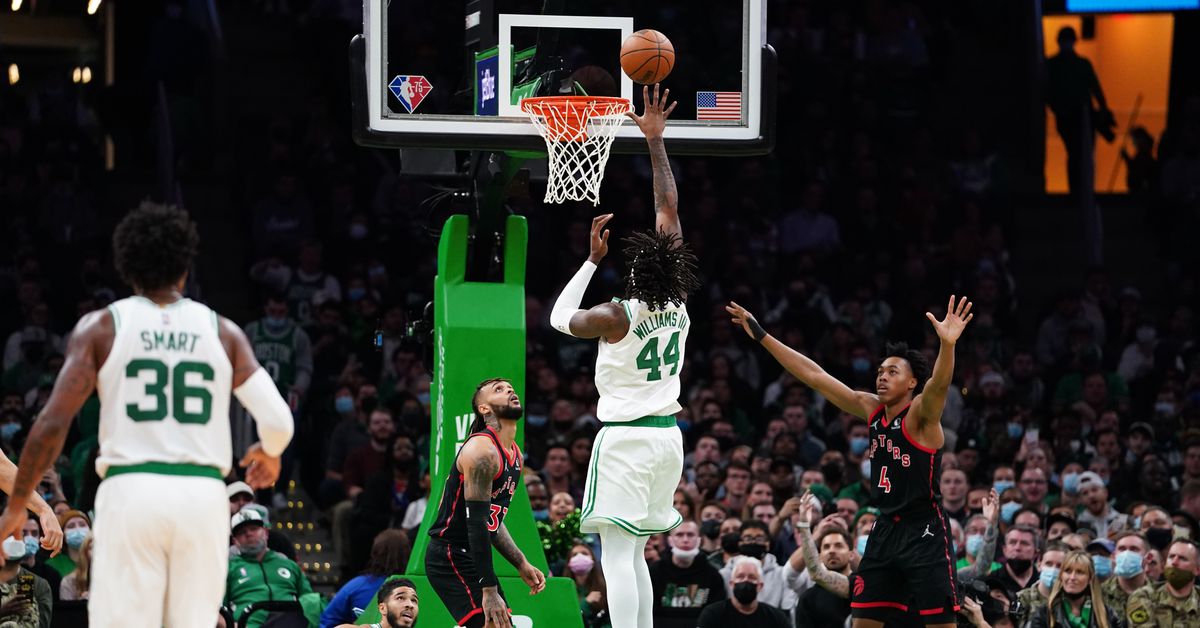 1. When the Boston Celtics lost to the Toronto Raptors in their home opener it was ugly. That game led to Celtics players questioning their effort and focus, while Ime Udoka said the Raptors “punked” his team.

Boston made a concerted effort to get into the paint. When a shot went up, Williams was regularly there to collect a miss:

Williams has more alley-oop finishes than 25 NBA teams do. Boston can steal easy offense on plays like this on a somewhat regular basis:

2. In the first clip, the Celtics played through Al Horford in the post. He missed that one, but Horford opened the scoring with a bucket in the paint:

It was the rare opportunity for Boston to be the bully and to take advantage of a size mismatch. That bucket by Horford gave the Celtics a lead they would never relinquish, as they led wire-to-wire.

3. Jayson Tatum still can’t get his shot to fall consistently, as he finished just 8-of-24 in this one. Tatum still got his shots off, but he also made a bunch of plays as a passer. If his teammates had hit a few more shots, Tatum would have easily had a triple-double.

Tatum’s patience, combined with Robert Williams’ gravity as a roller, helped open up Dennis Schroder for the three-pointer:

This is a nice little set. As Tatum breaks down the defense, Marcus Smart moves into position to screen Romeo Langford’s man from getting back out to the corner:

This play is just great basketball. Williams blocks Pascal Siakam’s pullup jumper and leaks out. Tatum corrals the rebound and drops the pretty left-handed pass on Williams for the runout dunk:

This play came during a stretch where Boston amped up their ball-pressure to put the game away. Tatum comes up with the steal and instead of pushing it himself, he unselfishly bounces it ahead to Schroder for the layup:

4. Turnovers were a major issue in the first matchup, as Toronto pressured Boston into coughing it up 25 times. The tables turned in this one, as the Celtics aggressive defense forced 18 turnovers, while nabbing 10 steals.

For their own ballhandling, the Celtics were actually fine, minus Dennis Schroder. Schroder was a little “schloppy” as he threw it away eight times himself. For a period in the third quarter, Schroder was trying to do much. Ime Udoka quickly took a timeout and could be seen telling Schroder to settle down. Things got better after that, and Boston quickly regained control of the game.

5. Josh Richardson said postgame that this is the most comfortable he’s felt since joining the Celtics. This was the second game in a row where Richardson has shown up on both ends. This block is all effort:

After Richardson shot too early during the end-of-quarter situation to close the third period, the Raptors got a bucket the other way. Richardson made up for it, by beating the buzzer to close the quarter:

6. Aaron Nesmith saw only a handful of minutes and didn’t make much of an impact. But this play stood out as the game slowing down for Nesmith somewhat. There is pretty good ball movement. Normally, Nesmith is going to let it fly off the swing pass from Dennis Schroder. Instead, Nesmith does a nice job of driving the closeout and finding Al Horford open at the arc:

It’s a miss, but the process here is great. Baby steps for the second-year wing.

7. This was one of those good Marcus Smart games. He was a menace on defense all night. He was composed offensively and let the game come to him. And this play is pure Smartness:

8. Jayson Tatum’s confidence never wavers as a shooter. He was having a rough night, and Boston was scuffling a bit early in the fourth quarter. Tatum stepped up and buried this pullup against a great contest to lengthen the lead:

9. Good teams play great defense throughout the entire game. The Celtics brought it for 48 minutes in this one. This clip starts with a solid double along the baseline. As the ball moves, so does the defense, ending with Robert Williams contesting a three from Gary Trent Jr.:

That play was with about three minutes to go in the game. That shows Boston was bringing it for the full game.

10. Following the game, Ime Udoka, Robert Williams, Josh Richardson and Marcus Smart all said the Celtics are starting to gel and find their identity. Udoka said the coaching staff has tweaked some of their defensive coverages to put players in the best spots to succeed. That’s seen Boston climb to 10th overall in defensive rating.

The defensive improvement also has the Celtics within a win of getting to .500 on the young season. Boston has a home game against the banged-up Milwaukee Bucks on Friday. That will be a good test to see just how improved the defense is, especially at the rim.