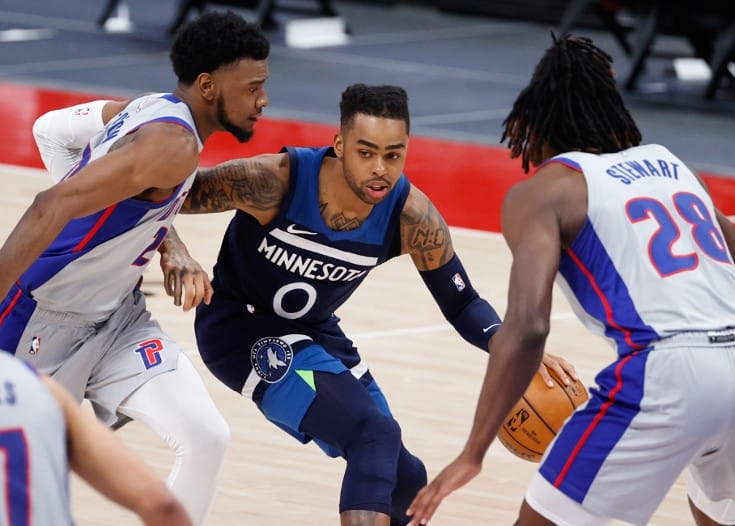 In Thursday night’s rare interconference encounter, the Minnesota Timberwolves (26-25, 26-25 ATS) are aiming to defeat the Detroit Pistons (12-38, 25-25 ATS); NBA picks are posted here. Will Karl-Anthony Towns and the Timberwolves earn their fourth consecutive win against the Pistons? In addition to the starting lineups, our top NBA picks and betting trends are available below.

All Timberwolves vs Pistons betting odds can be found at BetOnline

Additionally, on Tuesday, in the Timberwolves’ 130-115 home win over the Nuggets, center Karl-Anthony Towns added one more double-double to his career total, amassing 24 points, 10 rebounds and 7.0 assists in 28 minutes of action. Taurean Prince ended his night with 23 points, 9.0 rebounds and 2.0 assists in 24 minutes played as well. Minnesota has won six of its past 10 contests. Including this victory, they are 15-10 at home, 11-15 and 13-13 ATS on the road this season.

On the other side, in the Pistons’ 111-101 home loss versus the Pelicans on Tuesday, guard Cory Joseph led his team in scoring. He accumulated 18 points in 30 minutes on the court. Forward Jerami Grant contributed 17 points in 29 minutes played, too. Detroit has won juts three of its last 10 games. Their latest win on Sunday over the Cavaliers ended their four-game skid. The Pistons are 8-16 at home, 4-22 away and 13-11 ATS at home.

Per ESPN’s Basketball Power Index, the Timberwolves have a 67.2% probability of winning.

Prior to placing bets, be sure to consider other head-to-head matchups. In the previous three meetings, the Timberwolves are a perfect 3-0 against the Pistons. On May 11, 2021, the last time these teams faced off during the regular season, Minnesota won 119-100 at Little Caesars Arena. The Pistons have not defeated them since Mar. 6, 2019, when they won 131-114 at home.

On another subject,  rookie guard McKinley Wright IV is back in the NBA G League. In three games played with the Timberwolves, he averaged 1.7 points per game. On Aug. 5, 2021, he signed a two-way contract with the organization. One week ago, Wright IV made it clear that he enjoys having Alex Rodriquez as part of the team’s ownership group.

Heading into this interconference contest, Minnesota is a seven-point favorite. Not only have the Timberwolves won their last three consecutive matchups versus the Pistons, they are on a two-game winning streak. They have the advantage. In summary, the Timberwolves are the better choice to win and cover the spread. Also, the total will go under 228.5. If you need sports betting assistance, skim through our handicap betting guide. Other NBA Picks are on the main page.