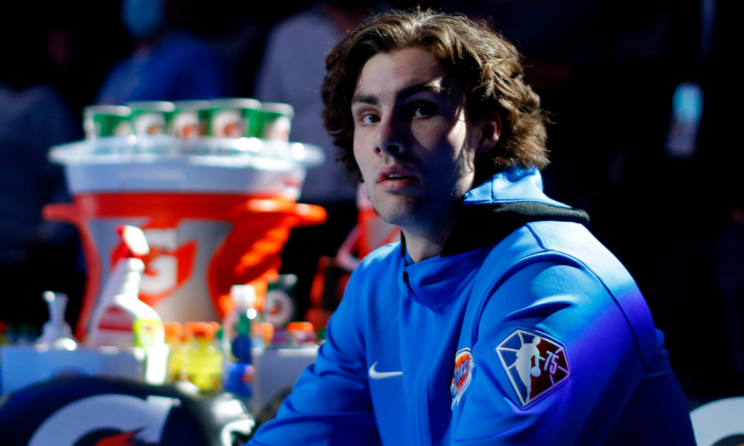 The Oklahoma City Thunder entered Monday night’s matchup with the Portland Trail Blazers on a seven-game losing streak, were playing without Shai Gilgeous-Alexander and trailed by as much as 18 points in the first half. Things could have gotten ugly at that point, but instead the Thunder turned things around and dominated the second half to secure a 98-81 win.

One of the Thunder’s most impressive wins this season came thanks in large part to one of the most impressive rookies of this year’s class: Josh Giddey. The 19-year-old Australian, who has turned heads this season with his playmaking, finished with 14 points, 12 rebounds and four assists.

In the process, he made a bit of history. Along with setting the Thunder’s rookie record for double-doubles in a season (11), Giddey became the youngest player since LeBron James to have 500 points, 200 rebounds and 200 assists through their first 45 games. He’s also just the fourth teenager ever to reach those benchmarks in 45 games. The others are Luka Doncic and LaMelo Ball.

These kinds of notes are always a bit arbitrary with the cut-offs for stats and games played. If Giddey only had 497 points through 45 games would he somehow be less remarkable? Still, it’s never bad when you’re the youngest player to do something since LeBron and are also joining a list with two other future superstars.

At the very least, it’s confirmation of what we’ve seen on the court so far this season: Giddey is special. His 6.1 assists per game lead all rookies, and early in January, he became the youngest player in NBA history to record a triple-double when he recorded 17 points, 13 rebounds and a career-high 14 assists against the Dallas Mavericks. He still has room for improvement, of course, especially in the scoring department, but if he continues on like this it won’t be long until he’s a nightly triple-double threat.

The Thunder have the fourth-worst record in the league at 15-34, but Giddey’s progress is one of the major reasons why this season hasn’t been a total loss. With Giddey, Gilgeous-Alexander and another top-five pick on the way, the future could be quite bright in OKC.