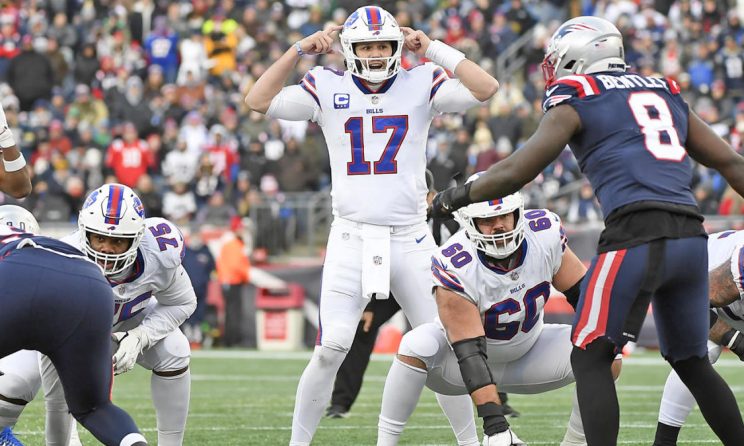 Hey everyone! It’s Zach Pereles back after holiday vacation. It was great to have some time off, but I’m glad to be back to my normal Sunday schedule: Gluing myself to the couch for 10 hours and bringing you all the NFL (and other sports) news the following morning.

Good morning to everyone but especially to…

A whopping 525 passing yards (the fourth-most ever in NFL history). Four passing touchdowns. Zero interceptions. Those were Joe Burrow’s stats Sunday as the Bengals romped to a resounding 41-21 win over the short-handed Ravens. Cincinnati did an excellent job ensuring there would be no letdown against a Baltimore team that started Josh Johnson — signed a week-and-a-half ago — at quarterback and entered the day on a three-game losing streak.

This one was personal, writes NFL insider Jason La Canfora:

La Canfora: “Maybe it was because Joe Burrow was an odd Pro Bowl snub, despite an excellent season coming off an ACL tear last November, and lost out to Ravens struggling and injured quarterback Lamar Jackson. Maybe it was just to show a longtime AFC North bully they could punch back. Maybe it was an indication they were sick of hearing about being the Bungles and squandering opportunities to secure a spot among the AFC’s elite. Maybe it was just because. Whatever the reasons for the Bengals’ unrelenting beatdown of the battered and tattered Ravens on Sunday, this was a butt kicking that never let up.“

Burrow totaled 941 passing yards in two contests against the Ravens this season, an NFL record for most passing yards against a single opponent in a single regular season. Cincinnati is in control of the AFC North at 9-6  — a game ahead of the Ravens — and with sweeps of both Baltimore and Pittsburgh already in hand.

That’s the theme of today’s “good morning” section: teams taking the lead in their division.

Joining the Bengals in this category are the Bills and Rams.

The Bills went into Foxborough and earned a statement 33-21 win over the Patriots. Josh Allen was outstanding with 314 passing yards, three passing touchdowns and 64 rushing yards. When Buffalo needed its signal caller at his best, he delivered, writes NFL expert Tyler Sullivan:

Sullivan: “As a whole, the Bills totaled 428 yards of total offense, spearheaded by the elite play of Josh Allen. Whenever Buffalo needed a clutch throw or run, the fourth-year quarterback was able to make it. He extended plays with his legs and had 20 passes that resulted in a first down.”

While the Bills took control of their division because of their quarterback, the Rams did it despite their quarterback. Matthew Stafford threw three interceptions, but Sony Michel ran for 131 yards and a score and Brandon Powell returned a punt for a touchdown in a 30-23 win over the Vikings.

It was far from perfect, but no one will ever complain about a road win that clinched a playoff berth and put Los Angeles in the driver’s seat in the NFC West following Arizona’s loss Saturday night.

And not such a good morning for…

Every season, there are good wins and bad losses. And then there are inexplicable losses.

That’s what the Chargers had on Sunday: A disastrous 41-29 defeat to the Texans.

Justin Herbert threw two interceptions, including a game-sealing pick-six to Tavierre Thomas.Houston racked up a season-high 189 rushing yards, including a career-high 149 from Rex Burkhead.Keep in mind that entering this week, Houston was averaging 77.4 rushing yards per game this season — last in the NFL.Davis Mills threw for 254 yards and two touchdowns, had no interceptions and took just one sack.

The Chargers had extra time to recover from a heartbreaking loss to the Chiefs last Thursday, and even without Austin Ekeler, Mike Williams and Joey Bosa, this result against this type of competition at this point in the season is awful.

The Chargers fell from sixth to eighth in the AFC playoff standings, too. While the Rams are celebrating a playoff berth, LA’s other team is suddenly on the outside looking in.

Not so honorable mentions:

On Sunday afternoon, the Cowboys clinched the NFC East. On Sunday night, they showed they have much bigger plans.

Thanks to a ferocious defense and a reinvigorated offense, Dallas jumped out to a 21-0 lead over Washington, had a franchise record-tying 42 points by halftime and finished off a 56-14 walloping with ease. It was the largest win by either team in the history of the rivalry.

How dominant was this performance? The Cowboys’ eight touchdowns were scored by seven different players, and they scored in all three phases of the game:

But the best sign for Dallas was a guy not listed above: Dak Prescott broke out of a months-long slump of uneven play. If he can carry momentum into the postseason, it elevates Dallas to a completely new level, writes our Cowboys expert Patrik Walker:

Walker: “If this is the version of the Cowboys that enter the playoffs, watch out … Prescott set the stadium on fire with 320 passing yards, four touchdowns, no interceptions, a 142.6 passer rating and 21 rushing yards on four attempts in the first half alone.”

The only fight Washington showed all night was the one defensive linemen Daron Payne and Jonathan Allen got into on the sideline. It was the franchise’s second-largest loss in the last 60 seasons. That is … bad.

LeBron James made history on Christmas, but the Lakers look lost 🏀

No Kevin Durant (or Kyrie Irving, or Joe Harris, etc.), no problem for the Nets. But lots of problems for the Lakers.

Brooklyn went into the newly christened Crypto.com Arena and topped the Lakers 122-115 on Christmas Day. The Lakers have lost five straight and look lost on both ends, but especially defensively, writes NBA scribe Colin Ward-Henninger.

Ward-Henninger: “The furious late comeback was great and all, but it doesn’t disguise the fact that the Lakers were absolutely dreadful defensively — again …  [L]ack of attention to detail (and sometimes lack of effort) … has led to the Lakers’ poor defense during their losing streak.”

If there was any consolation prize, LeBron James became the NBA’s all-time leading Christmas Day scorer.

He wasn’t the only star who shined bright. Giannis Antetokounmpo returned from health and safety protocols with a monster performance to lead the Bucks to a 19-point comeback win over the Celtics. Meanwhile, Stephen Curry set a Christmas Day career-high with 33 points as the Warriors picked up an impressive win at the Suns.