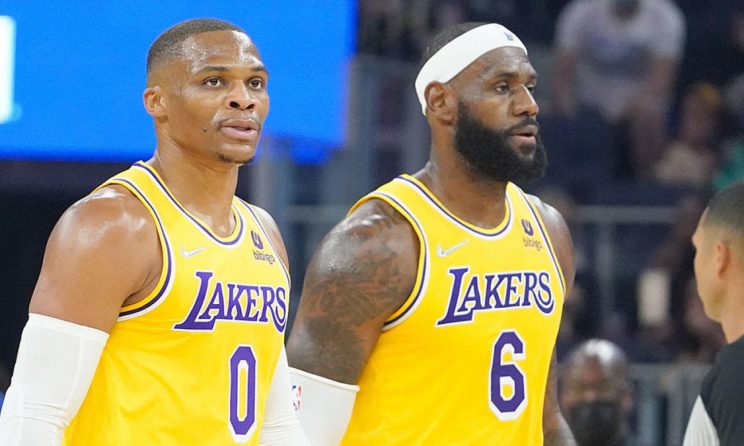 For all of the consternation surrounding the Los Angeles Lakers on offense over the past few seasons, their crunch-time approach has been as simple as it is lethal. No matter how rocky things looked for the majority of the game, they could always fall back on their finishing move: the LeBron James-Anthony Davis pick-and-roll. It was, for the better part of two seasons, the NBA’s most unstoppable play.

Switch it and LeBron cooks your big man on the perimeter. Blitz and Davis goes downhill for an easy dunk. Bring a third defender to the party and someone gets an open 3. James is among the NBA’s greatest pick-and-roll decision-makers. Davis is history’s greatest lob catcher and a three-level play-finisher. When properly spaced, it’s impossible to defend. Sadly, spacing isn’t exactly this team’s forte.

Memphis Grizzlies’ Desmond Bane sticks with James as he drives to the basket. Steven Adams hangs back on Davis. With the right surrounding personnel, these are enormous victories. Memphis’ center is out of the way as LeBron drives on a 6-5 guard, but he’s met at the rim by a far sturdier Jaren Jackson Jr. Jackson, operating as the low man in this pick-and-roll coverage, opened the play guarding Austin Reaves. He’s too dangerous a shooter for Jackson to leave … but Russell Westbrook isn’t. So Jackson rotates to the basket while Kyle Anderson switches onto Reaves. That leaves Westbrook wide open and James contested at the rim. He misses.

Calling the stop predictable wouldn’t do justice to the word. This is exactly what the overwhelming majority of the basketball world expected to happen when the Lakers went to their favorite play. It’s probably what Frank Vogel himself expected would happen considering his entire defensive game plan in his 2020 series against the Houston Rockets revolved around ignoring Westbrook when James Harden was trying to create. Off-ball Westbrook’s functionality in typical half-court offense is debatable and will probably evolve over the course of the season. Off-ball Westbrook, in this specific play, is essentially worthless. His one job is to be a threatening enough shooter to keep defenders off James and Davis. Thus far this season, he is making just over nine percent of his 3-pointers. That’s not going to cut it. Neither is his 30.5 percent career mark.

There are two simple solutions here, and neither is perfect. The Lakers could turn Westbrook into their primary late-game ball-handler. No defender would dare abandon James off the ball, but they’d probably be thrilled to be guarding him there in the first place. Does it ever really make sense to take the ball out of the hands of LeBron James?

The more extreme alternative would be benching Westbrook for crunch time. The primary value of a secondary ball-handler for the Lakers is limiting wear and tear on LeBron, but if he’s going to run the entire crunch-time offense himself anyway, having a non-shooting point guard on the floor in those specific minutes serves little purpose. Suggesting this on paper is all well and good. Enacting it within the political reality of a locker room is another matter entirely. Westbrook is an MVP. The Lakers invested almost all of their assets into acquiring him. James and Davis supported that acquisition. Even if it’s the right approach, it’s not the realistic one. For better or worse, the Lakers are going to have to figure out how to integrate Westbrook into their crunch-time offense.

So they experimented with a middle ground Lakers fans have been waiting for. For three consecutive late-game possessions on Sunday, the Lakers used James as their pick-and-roll initiator, but replaced Davis as the screener with Westbrook, whom they could then unleash as a short-roll playmaker. The result of the first play was, essentially, the idealized vision of what the James-Davis-Westbrook trio can be.

Westbrook makes the initial screen and ducks down into the paint before realizing James doesn’t have a passing angle. Undeterred, he waltzes back up to the ball and tries again. This time, James goes right and both his man and Westbrook’s go with him. James takes advantage of the double to hit Westbrook at the nail.

This is where Westbrook goes from a half-court liability to a lethal weapon. Suddenly, a former scoring and assist champion has a 4-on-3 and some runway to attack the basket. Adams plays the drive, and that leaves Davis free to make the backdoor cut for the easy dunk. The collective athleticism and basketball IQ of the Lakers’ star trio all worked in harmony to create one of the easiest looks of the night, and it would have no matter how the defense had approached it. Had Adams played the pass, Westbrook could’ve tried his luck with Jackson at the basket or passed out to an open Kent Bazemore for 3. All three options generate good shots. The Lakers got one on their next possession as well even if it didn’t go in.

Westbrook’s screen manages to free James up a bit more this time, so he steps inside the arc. With two defenders devoted to James, Adams plays the Westbrook short roll because it’s how the Lakers just scored one possession earlier. Instead, LeBron fires the pass out to Davis for a wide-open 3. It missed, but the Lakers will live with that look. Of course, they’d prefer more attempts like his dunk from the previous play. They almost got another one on the next attempt.

The play is fairly similar to the first one. The defense commits to James. He makes the pocket pass to Westbrook. Adams plays him as a driver. Davis cuts to the basket, though from the wing rather than the corner. He just doesn’t catch the ball. If he had, it would have been two more points. The alternatives were identical as well. If Adams sticks with Davis on the wing, Westbrook either gets a free walk to the rim, or Jackson has to rotate over, which gives Bazemore an open look from 3.

Westbrook lives for these split-second decisions because he’s so much faster and so much more aggressive than the defenders trying to stop him. That isn’t just physical. It’s mental. Making these calls in real time is difficult against an average ball-handler. Defending Westbrook with space in front of him is utter chaos, and in such tight quarters, it’s nearly impossible to process everything he’s seeing. Watch those two passes to Davis again. By the time Adams even realizes that Davis is cutting, it’s already too late.

Defenses will experiment with adjustments. Devoting both defenders to James created these 4-on-3s. A logical alternative would be to switch the screen, but doing so is similarly perilous. A small guard is probably defending Westbrook most of the time. Do you want to leave that player alone on an island with LeBron? Is James just going to attack the switch before it’s been fully executed? Pulling off the switch is probably the trickiest part, but once it’s done, there’s presumably a bigger defender that can sag off Westbrook and help against James drives.

The look is hardly new to James or the Lakers. They ran variations of it with Dennis Schroder last year. It was a staple of LeBron’s when he played with Kyrie Irving in Cleveland. In both looks, James frequently worked as the screener, and that’s a wrinkle the Lakers are sure to install in the coming weeks and months. For now, they’re still fine-tuning their approach to this version.

There will be teams that duck under the screen as well. As much as James has improved as a pull-up shooter, defenses still prefer him attacking from beyond the arc than inside of it. Depending on who closes games alongside this Lakers trio, opponents might dare teammates like Bazemore to hit the open 3s more aggressive coverages might generate.

Cracking these codes is going to be a season-long endeavor for the Lakers. It’s a play they’re installing slowly. Westbrook didn’t set a single ball screen on opening night. He’s been such a ball-dominant player for his entire career that he’s practically never needed to. But some version of this play is going to have to be a late-game staple for the Lakers if they plan to keep Westbrook on the floor in the final minutes. It’s one of the few ways they can take advantage of him and LeBron at the same time. It wasn’t quite as unstoppable as the James-Davis pick-and-roll that obliterated the league for the past two seasons. It probably won’t ever be. But for three possessions on Sunday, some of the Lakers’ vision for successfully integrating Westbrook into their offense shined through. The result was the first of what should be many wins this season.