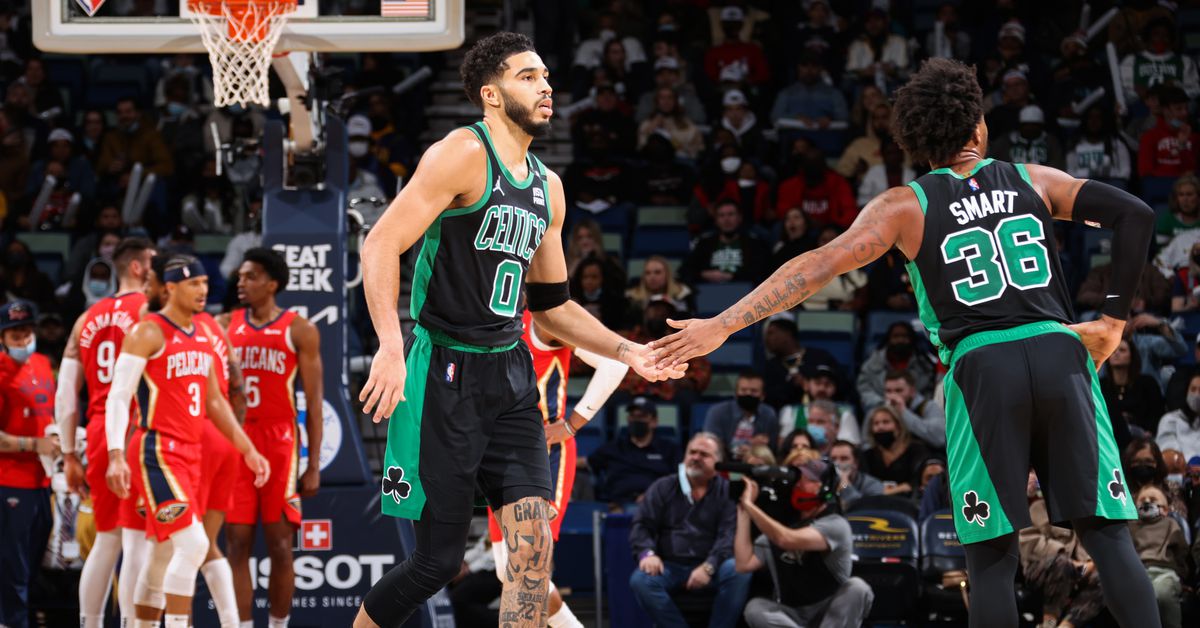 1. Jayson Tatum went 13-for-13 on two-point shots for the Boston Celtics against the New Orleans Pelicans. That made Tatum just the 15th player in NBA history to hit that many shots without a miss from inside the arc. He got started early by breaking down the Pels defense with ease:

This play starts with an outstanding block by Grant Williams, followed by a great outlet pass from Al Horford. Tatum makes sure no one is challenging this shot by hammering it through:

This is a good example of Tatum working off-ball. He makes a great cut to get the pass. To finish, Tatum does something we don’t see him do often enough: He uses his size and strength to go up and over a smaller opponent. No finesse here, just strength:

2. The Celtics ball movement was outstanding all night. They had 31 assists on 43 baskets. Marcus Smart keyed that with 12 assists (more on his passing in a minute), but all five starters had at least three assists.

Here, Jayson Tatum does a good job drawing the defense to him in the mid-post area. After a kickout pass, Josh Richardson makes the quick swing to Jaylen Brown for the open triple:

This play starts with Tatum slipping a terrific pass into Marcus Smart at the nail. As Smart turns, he could have shot, but he saw Robert Williams lurking at the rim for the easy finish:

3. Jaylen Brown is going to show up in these clips quite a bit, because he scored 31 points. It was a fairly efficient night for Brown, as he scored at all levels. There weren’t a lot of highlight plays, but that’s ok. Killing an opponent softly with efficiency is still killing an opponent.

4. Following the game, Marcus Smart was spotted rubbing and flexing his right hand. When asked if his hand was sore, Smart revealed he still has glass in his hand from punching a picture frame in 2018. Smart also said at times he has trouble finding feeling in the hand because of the glass. That makes his 12-assist night even that much more remarkable.

This is a great pass from Smart to Al Horford. Notice how he throws it Horford’s outside shoulder, which leads him right into the shot where the defender can’t challenge him:

In transition, Smart’s in full control. He holds this ball up to allow some traffic to clear. That leads to Jaylen Brown making a cut for the and-1:

This is classic point guard play from Smart. He comes off the screen and could have pulled up for three or even taken a two-pointer. By keeping the ball for one extra beat, and keeping his eyes up, Smart holds the defense which opens up Brown for a three:

Terrific set here to open the second half scoring. Smart delivers an outstanding pass to get Rob Williams the easy layup:

5. Because Smart was in full control of the offense, when he sat things got really rough. Dennis Schroder struggled to keep the team flowing with the same pace and movement that Smart had working. Boston was a +28 in Smart’s 30 minutes. In the 18 minutes he sat, the team was -18.

Single game plus/minus isn’t a perfect stat. In this case it tells the story of the game perfectly. Tatum and Brown carried the scoring, but Smart directed the show. And he did it really, really well.

6. After the Pelicans made a big run in the third quarter to make the game close, Smart came back in and got thing back under control for the Celtics.

Jose Alvarado played a really good game for New Orleans, but Smart had enough and went to work on the young, smaller guard. To open the fourth quarter Smart drew a couple of free throws. Then he bullied Alvarado for this layup:

And then Smart closed out the game with this steal. This is a play no other Celtics player makes and Smart does it at least once a game:

7. Robert Williams is closing in on the first 5×5 game of his career. That’s at least five points, rebounds, assists, steals and blocks in the same game. It’s coming and it’s coming soon. After the game, Ime Udoka, Marcus Smart and Jayson Tatum all called out Williams’ progression as a key to where the Celtics hope to be going this season and beyond.

There aren’t many centers who can do what Williams does on this play. First, Williams contests at the arc, forcing a pass. Then he recovers immediately to block a floater:

Part of making the 5×5 possible is Williams is a very good passer for a center. This is a good cut/delayed-roll and Williams knows exactly where he wants to go with the ball. If the defense doesn’t cheat to help on him in the lane, he’ll just go up for the dunk/layup. But the defense does cheat and Williams kicks to Schroder in the corner:

8. You are what your record says you are. The Celtics are 26-25. But they have a league-high discrepancy between actual and expected record, as Boston’s expected record is 30-21. That’s why there’s still so much hope that this team might eventually figure it out.

Driving most of that hope is the Celtics are an elite defense. They are fourth in the NBA in Defensive Rating. That’s driven a Net Rating of +3.0, which is fourth-best in the Eastern Conference.

That defense, combined with Jayson Tatum shaking off his season-long shooting slump, Jaylen Brown doing his thing, Marcus Smart controlling the offense and Rob Williams blossoming, along with better health, give the team hope heading into the playoff push.

9. Ime Udoka has had his share of issues this season as he’s learned on the job. He’s probably leaned on his veteran players a bit too much. But, with the roster healthy, Udoka has tweaked his rotation significantly. Enes Freedom is completely out of the rotation now, with Rob Williams, Al Horford and Grant Williams splitting the big minutes. Marcus Smart and Dennis Schroder aren’t playing together very often (minus an odd pairing late in the Atlanta game). And Udoka is pulling players quicker than ever if they aren’t effective.

Growth is something we look for in young players all the time. It’s fair to look for it in first-time head coaches too. Ime Udoka is showing it with a healthy roster.

10. The Celtics head back home to close out January with a game against the Eastern Conference-leading Miami Heat. We said January had a chance to be a good month, and it has been. Boston is 9-6 in the month with one game to go.

The Celtics have one of the easiest remaining schedules in the Eastern Conference. Almost all of the teams in front of them have a harder to much-harder schedule.

We’ve been here before. It’s been a “win one, lose one” season so far. But as Marcus Smart said postgame, “We don’t make any excuses. We own it. We just have to keep coming. Keep working. Eventually, we’re going to go on a run here. But we have to hone in on those things we haven’t done well. But no excuses.”

Getting a win over the Heat on Monday would go a long way towards turning that corner and getting that run started.