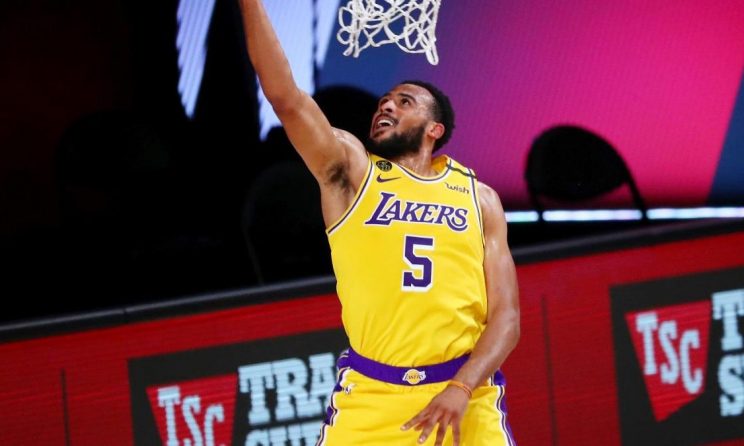 Let’s talk about first-world problems. The 2019-20 Los Angeles Lakers had one glaring weakness: they struggled to score whenever LeBron James left the game. This of course comes with the notable caveat that only teams that are lucky enough to have LeBron James in the first place are burdened with this issue, but it at least gave opponents a glimmer of hope. For somewhere between 10 and 15 minutes per night, the unstoppable Lakers were mortal. When James left the floor before the bubble, the Laker offense dipped from 113.3 points per 100 possessions (equivalent to the No. 2 offense in basketball) to 105.2 (equivalent to the No. 29 offense in basketball).

The Lakers spent the offseason correcting the issue with a slew of big-name additions. Sixth Man of the Year Montrezl Harrell brought his 18.6 points per game across the Staples Center hallway, and runner-up Dennis Schroder, acquired in an offseason trade, topped that with an average of 18.9. Problem solved. The Lakers went from a bad bench offense to a good one in the span of a single offseason. They’ve now gone from a good one to a potentially great one in the span of a single preseason, one that hasn’t even concluded yet.

That leap comes courtesy of an internal addition. Talen Horton-Tucker spent his rookie season plastered to the bench, only occasionally getting spot duty on a team whose minutes primarily belonged to veterans. He starred in the G-League to the tune of over 18 points per game, and a brief cameo in the second round against Houston was proof of the team’s faith in his future. That faith appears to have been rewarded. Through two preseason games against the rival Clippers, Horton-Tucker is now averaging 27 points per game on 50 percent shooting.

Stick all of the preseason qualifiers on those numbers that you want. Moves like this generate points year-round.

Scoring with the ball in your hands is all well and good, but such opportunities tend to be rare on championship teams. Points have to be generated as easily off of the ball, and he’s already started to develop a nice chemistry with Marc Gasol on that front.

No, Horton-Tucker is not going to average 27 points in games that LeBron James and Anthony Davis play in. Defenses are going to adjust. He probably isn’t going to be this open from behind the arc very often.

But if struggling to score without LeBron is a first-world problem, struggling to find minutes for all of your non-LeBron scorers is something even less relatable — a debate about which Lamborghini to drive or which Rolex to wear to the regatta. Last season, the Lakers genuinely hoped that Kyle Kuzma could be their third scorer on the way to a championship. This time around, Horton-Tucker is making a compelling case to push Kuzma all the way down to sixth.

James and Davis are going to take nights off this season. Keeping them healthy for the playoffs is the priority, and this remains an older roster. But there are going to be nights in which everyone is available, and finding minutes for James, Davis, Schroder, Harrell, Kuzma, Gasol, Kentavious Caldwell-Pope, Wes Matthews, Markieff Morris, Alex Caruso and Horton-Tucker is going to be a challenge even if it’s one that will draw little sympathy from opponents. Playoff rotations are trimmed even further. Competition will be fierce, and that will be one of the principal benefits to this depth.

If Kuzma doesn’t sustain the defensive growth he showed in the bubble, he might be the odd man out. Caruso needs to prove similar improvement as a jump shooter, and Morris might have to jump back into the fountain of youth he found in Orlando. Dominant regular-season teams tend to play nine or 10 players. Championship runs tend to lean on seven or eight.

The fact that the Lakers seemingly have 11 rotation-caliber players right now almost guarantees that they’ll have the nine or 10 that they’ll need when the regular season starts in a week, and the seven or eight they’ll rely upon when the stakes are at their highest. That depth insulates them against the attrition that will surely swallow thinner teams in a condensed season likely to be further impacted by COVID-19. The Lakers have all of the talent they’ll need, even if they don’t quite know how it’s going to align yet.

That is only going to make it harder for the field to dethrone them this season. A year ago, opponents could at least reliably use the minutes that LeBron sat out to chip away at the otherwise invulnerable juggernaut. Now? Good luck winning any stretch against the defending champions.