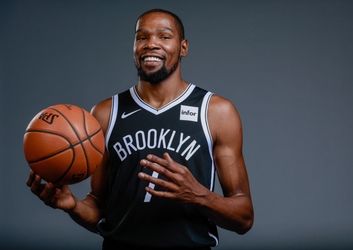 Long before Steve Nash became the Nets’ head coach, he crossed paths with his new team’s superstar. Still an NBA player, Nash started mentoring Kevin Durant in 2013, then a rising star with the Oklahoma City Thunder.

The early relationship later led to a player-coach scenario with the Golden State Warriors, including Nash as a consultant. After working directly with Durant, the familiarity carries over into a new situation for the Nets.

Durant is accomplished as a 10-time All-Star, four-time scoring leader and two-time NBA Finals champion. Nash believes Durant still has plenty left to achieve, though, as a chapter with the Nets officially begins in 2020-21.

“Well, we have a strong relationship,” Nash said Tuesday on YES Network during a Town Hall with the new Nets head coach. “I think it actually started before that, when I was finishing my career. Ironically, Adam Harrington, one of our assistant coaches here with the Nets, was at the time Kevin’s personal coach. We’re talking 2013, perhaps.

“So he connected Kevin in a way that maybe I could help guide and mentor him, in a sense that he was a player entering his prime and I was a player quickly exiting my prime. I can share with him some of the experiences I’ve had and we developed a bond over the game, and that led to the Warriors situation a few years later where we continued to develop our relationship and here we are working together again.

“So he’s just a human being that I have a lot of love for and a lot of belief in, and the type of person he is and character he is. And as far as a basketball player, I mean, he’s historically unique and impactful. He’s one of the all-time greats already and he’s still got a chapter to write here.”

Durant, who played for the Seattle SuperSonics (2007-08) and Thunder (2008-16) before a most-recent run with Golden State (2016-19), did not play in 2019-20 as he recovered from his ruptured right Achilles. Upon working back, the Nets with Durant and point guard Kyrie Irving figure to be a Finals contender.